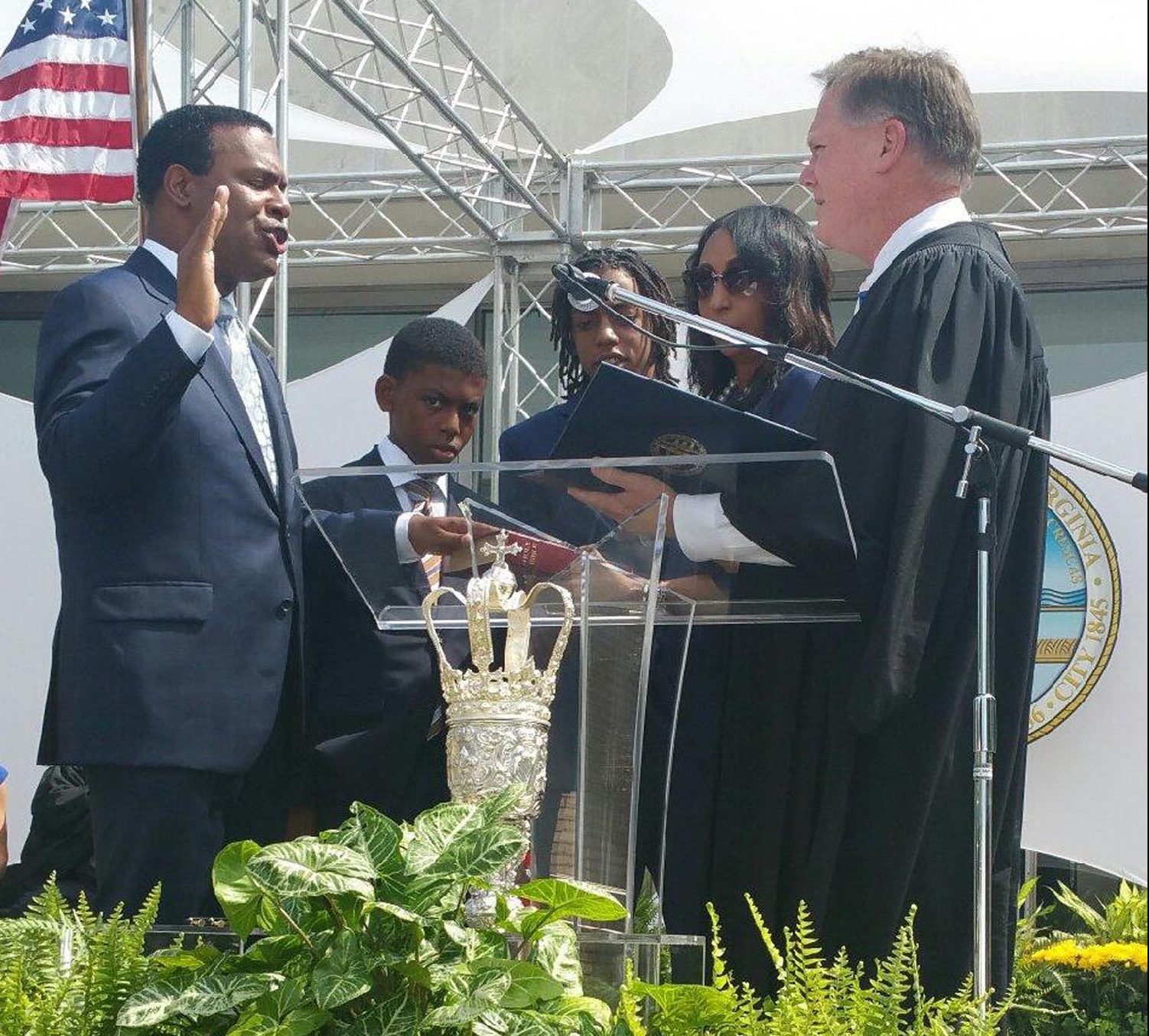 Norfolk historians say the land where Norfolk’s City Hall complex now sits was where Black men, women and children were sold as slaves on the auction block. At 10:22 a.m. on July 1, 2016, Kenneth Cooper Alexander took the oath of office as Norfolk’s first Black mayor. The ceremony brought the city’s racial and political history full circle. Where his ancestors once stood and were sold as property, Alexander will now preside as Norfolk’s top political leader.

The 2016 Council and Mayor Swearing-in ceremony recorded its largest number of witnesses. People from the money-elite to those who lived down the street in the city’s public housing communities stood on the south steps of city hall to witness it. Outgoing Mayor Paul Fraim, who held the job for 22 years, was the Master of Ceremonies and ran the event as he did most council meetings with efficiency, as the hot sun poured down on the crowd.

Before Alexander was sworn-in as the city’s 99th mayor, Ward 7 Councilwoman Angelia Williams Graves was sworn in by Norfolk Circuit Court Judge Jerruald Jones, with her husband Tommy Graves holding the Bible. Then the newest member of the council, Andria Padgett McClellan, who beat 6th Superward incumbent Barclay Winn took the oath. McClellan, who sat on the city’s Planning Commission, will be one of four women who will sit on the council now.

Then Norfolk John R. Doyle, III swore in Alexander and crowd cheered. Alexander gave brief remarks about his rise from his humble beginnings in the Norfolk Berkley Community to the Mayorship of Norfolk as an achievement he had since childhood. It was spurred on by his positions as civic league presidents, member of the Norfolk Economic Planning Commission and then stints in the House of Delegates and Senate.

This reporter roamed the crowd talking to various people in political power who witnessed the event. But one lady who stood on the side, in the back with the caterers and other workers, echoed the reaction of the elite and humble. She is lifelong resident of Norfolk and worked as a custodian at Norfolk Sentara Hospital. She said she never had attended the swearing-in ceremony before although it was only a short walk from her home in Tidewater Park.

She used to live in Berkley and although she did not know the new mayor, she had watched him and felt “that child had something special.” “I have been living in this city all my life,” she said. “I have never given a thought to coming down here to see anyone sworn in. I did not think poor people were welcome, to be honest.. I thought you had to be somebody or invited. I cried when I heard he was elected and I did a few minutes ago when he put his hand on that Bible like Obama did. That shows you how far we have come.

“I never thought this would happen. He is one of us … I mean Norfolk, because many of us came from nothing to become somebody,” she continued. “I think he will be a fine mayor. I just pray…hope Black and White people will give him a chance. He will make mistakes and he will do good. They all do. Look at Fraim.” “We have problems in this city that did not pop up in the last five years. They have been existing since I was a girl. This is historic. But it does not mean the bad (part of our history) should be used to keep him from doing good for all of us.”

After the swearing-in, the newly formed council’s first order of business was electing a vice mayor. The panel voted 7-0, surprisingly to elect Councilwoman Dr. Theresa W. Whimbley as the vice mayor and then adjourned. Three days later, Alexander, despite the rain, was making his rounds as the city’s new political leader, attending various 4th of July events throughout the city, including Ocean View, Suburban Park and Larchmont, and he had targeted others as time and weather would allow.

Alexander ran one of the most well organized campaigns for city wide office in the city’s history. He beat two well-known opponents – Sheriff Bob McCabe and former Councilman Andy Protogyrou. Alexander, in a brief interview with the Guide as he was being driven to his next event on Independence Day, said now “the campaign now over and it is time to govern.”
“It is now time to strengthen and connect with the council,” said Alexander. “We all know each other so now we must hit the ground running to fix a lot of issues related to education, crime, poverty and unemployment, and flooding due to global warming. If flooding shuts down Norfolk, it will shut down the heart of the region. So we must have clear policies.”

Alexander is the first post-Baby Boomer leader of the city and said that he will use every tool within the policy and governmental apparatus to address these critical issues.
But to do anything, he will need a fifth vote on the eight-member council to achieve his goals. Applications are being accepted for someone to warm Protogyrou’s seat in Ward 1 until an election is held later this year to fill it permanently, Several individuals have already begun filling out the paper work to run for the seat. They must live in the ward to qualify.

“We must build some consensus,” Alexander said. “I am patient because I am a consensus builder. I know the rules. I realize that alliances must be built. I was a member of the General Assembly for 14 years and I know things take time.” Alexander said that outgoing mayor Paul Fraim gave him several pieces of advice. But the one most important to him he said was “to listen.” “To listen. Listen to the people. Listen to the council,” Alexander said. “Paul Fraim loved Norfolk and he was a great leader.”

On the day he was sworn-in, Alexander sought to dispel any tension between him and former Vice Mayor Angelina Williams, who supported Protogyrou, one of his opponents.
Alexander took a picture with Williams, her husband, funeral director Tommy Graves and other Norfolk officials to show his willingness to build cohesion and to arrest any division which may cause him headaches along the way.

Alexander said he will be working with various civic, religious and church leaders to stem the tide of crime in the city. He said that while crime is an issue citywide, ‘it has gotten a lot of attention in certain neighborhoods” such and Huntersville and other majority Black communities. “Here is an area where we have to use all of the tools at our disposal to get the job done,” said Alexander. “We are talking about education, code enforcement, availability of guns and role of parents and urging personal responsibility. We cannot legislate our way out of this issue.”

In the coming months, the media and residents will be watching to determine the kind of leadership style Alexander will use. Though City Manager Marcus Jones is in charge of keeping city running each day, Paul Fraim was considered a powerful, hands-on policy and administrative mayor, although the code of the city did not prescribe it. Alexander said he is also a hands-on manager having built one of the largest funeral homes companies in the city.

Alexander said he is a religious man and adheres to the teachings of the Bible and many of the characters who define the stories it contains. For an example of his leadership style and use of power, he said referenced the biblical story of Solomon. Solomon was the king most famous for his wisdom. In 1 Kings, he sacrificed to God and prayed for wisdom. God personally answered his prayer, promising him great wisdom because he did not ask for self-serving rewards like long life or the death of his enemies.

Perhaps the best known story of his wisdom is the Judgment of Solomon regarding two women who each lay claim to being the mother of the same child. Solomon easily cut through the dispute by commanding the child to be cut in half and shared between the two. One woman promptly renounced her claim, proving that she would rather give up the child than see it killed. Solomon declared the woman who showed compassion to be the true mother, entitled to the whole child. One politically ally, when asked about Alexander’s choice of Solomon as his Biblical model, said, “Kenny is well trained. In this city and at this time he will need that and to use the skills which got him to this point in life to achieve his goals.”