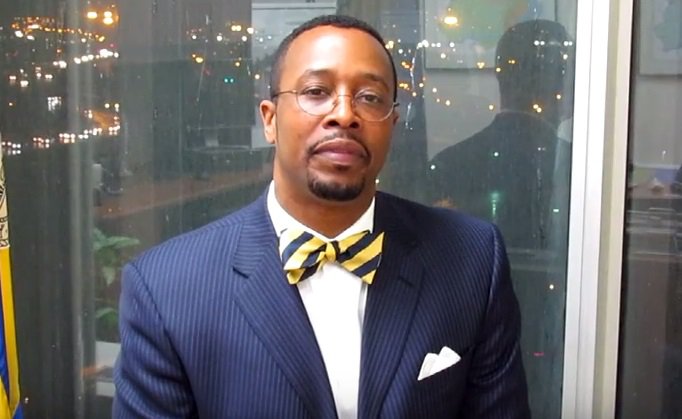 A motion was filed this week to remove Anthony Burfoot as Norfolk Treasurer, following his sentencing to six years in prison. Burfoot was suspended from the position by a Norfolk judge in February.

On Tuesday, April 18, his attorney said Burfoot is entitled to keep his job until he exhausts all of his appeals in court.

(At New Journal and Guide press time on Wednesday, April 19, this story was still developing and will be updated for next week’s paper.

From 2005 to 2011, while on the Norfolk City Councilman, Anthony Burfoot received thousands of dollars in bribes in exchange for his vote to support projects of various developers, according to revelations that convicted him during his federal trial last winter.

Instead of being dispatched to jail immediately, the judge accepted Burfoot’s plea for more time to attend to matters related to his ailing mother’s business affairs. So he was allowed to surrender to federal authorities no later than 2 p.m. April 19, to begin his sentence.

Along with the six years, Burfoot must forfeit $250,000, which the courts said he generated during the time he was orchestrating his stretch of corrupt behavior. And once released from jail, he must perform 360 hours of public service.

The much anticipated sentencing of Burfoot comes after more than 14 months of legal and personal drama for a man who has devolved from one of the most influential African American political and civic figures in recent times.

In February of 2016, he was indicted on various federal corruption charges stemming from a federal investigation revealing that he received bribes from owners of the Tivest Construction Company, Dwight and Curtis Etheridge. They testified that Burfoot hooked them up with various city-funded development contracts while he was on city council.
Developer Ronnie Boone also said he bribed Burfoot in exchange for support for his projects.
So did Tommy Arney.

In total, prosecutors said Burfoot collected some $464,000 in cash along with cars and other gifts for his vote or other efforts to aid the businessmen’s projects.
Burfoot has maintained his innocence despite the lists of damning revelations which crippled his integrity in the city, the pressure to resign and a recall effort to oust him from the job as City Treasurer.

In fact, days leading up to his sentencing, Burfoot’s attorney Andrew Sacks continued unsuccessfully to challenge the testimony of various key prosecution witnesses.
For instance, he challenged Ronnie Boone, who has skirted receiving any time in prison because of health reasons, including dementia.
Sacks cited that as a reason to toss out the conviction imposed on Burfoot last December and perhaps launch another trial.
All to no avail.

Also there were several high ranking public officials such as City Attorney Bernard Pishko and State Delegate Daun Hester, who wrote letters in support of Burfoot, citing his good works on council and overseeing the development of the Broadcreek Housing Community.
But Judge Morgan noted although these deeds, specifically at Broadcreek, were admirable, Burfoot raked in thousands of dollars for himself which should have been used to construct dwellings and other amenities at the site .

The Burfoot saga has divided the view of the him and his legacy in the Black community.
Some persons say Burfoot should not have been sanctioned so severely because of his good works in the community and the fact that Ronnie Boone, a White developer who also was found guilty, avoided jail.

Federal prosecutors had proposed that Burfoot be jailed for up to 17 years.
But there are others who believe that Burfoot was a greedy and at times aloof public official who received punishment that was justified, considering his corrupt activities.