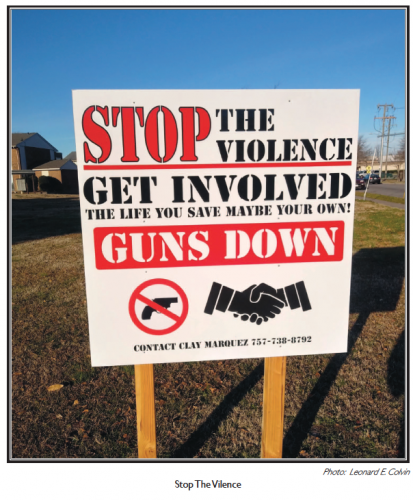 At the end of 2019, Norfolk recorded with over 30 homicides caused by gun violence.

About the same as last year.

The ages and genders of the victims vary as are the assailants.

Both were mostly Black, were acquainted in some form, and lived in areas where African Americans have historically lived in for decades.

The city’s Police Chief Larry Bonne has urged gun owners to safeguard their guns to keep the deadly weapons from being stolen and used for such crimes.

He has declared gun violence a health issue, which needs more resources and concern from civic and political leaders.

Over the past three months, another strategy has been employed, not involving impassioned speeches, police patrols or cold statistics.

Observant commuters in their cars or on foot can easily see huge placards on stilts with the big black and red bold letters on white backing declaring simply: “Stop the Violence. Get Involved. The life you save may be your own. Guns Down.”

Clay Marquez’s name and phone number are at the bottom of the huge objects.

Marquez, who owns a small car repair shop on Norfolk’s 26th Street, and a growing coalition of supporters are the force behind them.

During a recent interview with the GUIDE, he said he has erected signs around the city where many of the incidents involving gun violence have taken place.

One of the first was placed at the intersection of Tidewater Drive and Goff Street and another nearby.

Several of the shootings occurred within blocks of the two.

One is placed off Church Street in front of the Watergate corner store, near Young Terrace; another is at Freemont and O’Keefe Streets – all in the Huntersville Section.

Then, there is Wilson Road in Campostela; Berkley Avenue in Berkley near the shopping center and the gates of the shipyards.

This past weekend, Marquez and other members of the “Stop the Violence” group posted one at Sewell’s Point and Johnston’s Road in the Norview section, the site of one of the most recent shootings.

On the morning of December 30, Marquez and his crew erected one of the signs on 27th Street in Park Place, where groups of young men congregate near a convenience store. In all, he hopes to erect 11 of them before mid-January. He hopes they will be a daily reminder to adults and youths to contribute to ending gun violence in the city.

Marquez is a man who was born and grew up in Huntersville on Fremont Street, he said.

He and his family still live in the general area.

A small fish in the game, he and many of his homies were caught by the nation’s War on Drugs net.

The net and the courts dispatched thousands of young Black men. like him, caught up in the urban drug game, to state and federal jails.

Being a sacrificial member of the street drug trade cost him 10 years of his life. But upon returning home, he started his own business.

He has worked hard to be enterprising, legally and establish are good middle class living for his family.

“But I got tired of hearing about the shootings,” said Marquez. “I knew a lot about why it was going on. So, I got off my couch and hit the streets again hoping I could help some of these young brothers from killing each other.”

Marquez’s group has formed a liaison with the Norfolk Police Department, attending and talking at civic leagues meetings, reaching out to leaders of area mosques and churches, helping these agencies and organizations.

He has staged events such as a recent yuletide gift giveaway to children to bring attention to the problem and bring his message of goodwill and “put down the guns.”

Right now, he is collecting contact information for city council and other civic leaders to help arrest the city’s gun violence problem.

He has held rallies with the Norfolk Police Department, attended by the Chief and other high-ranking officers, responsible for policing the areas where many of the shootings have taken place.

“A young brother came to me and said he saw the signs,” said Marquez. “He has a family now. He wanted to get run off his gun. Did not want to sell it to the streets because he feared someone would use it to hurt someone. That is one out of 100 but it’s a good start.”

Poverty and a lack of good decision-making skills to avoid using violence as a primary answer to conflict are among prime reasons for gun violence.

Also, the petty territorial spats between rival gangs are another reason for Norfolk and other cities experiencing street violence involving guns.

Marquez said the tension has lowered between rival street gangs based in Huntersville and Berkley over the year which accounted for many of the deadly acts of gun violence recorded by police.

He said that postings on social media almost caused a renewed wave of violence.

“But the video was four years old,” he said. “But it was enough to cause more violence. I pointed out on social media that many of the people in the old video are dead, in jail or off the streets.”

Marquez’s work, he said, has placed himself and his family at risk for his activism in seeking an end to violence. But he has been encouraged also and is determined to move forward with his project.

Marquez, 47, realizes that millions of words and dollars have been spent locally and nationally to eradicate poverty and economic isolation and the most heinous product, gun violence.

But he believes that there is one simple solution to it all.

Marquez, from his observations being a lifelong member of the “hood” believes that the community must invest in its poorest and most isolated residents – Black males notably.

“We got to provide access to resources more than hope. An education, employment which pays enough to take care of themselves and family, and some fairness,” he said. “We want to take guns out of their hands. At the same time, we must replace it with something which helps them be constructive citizens.”