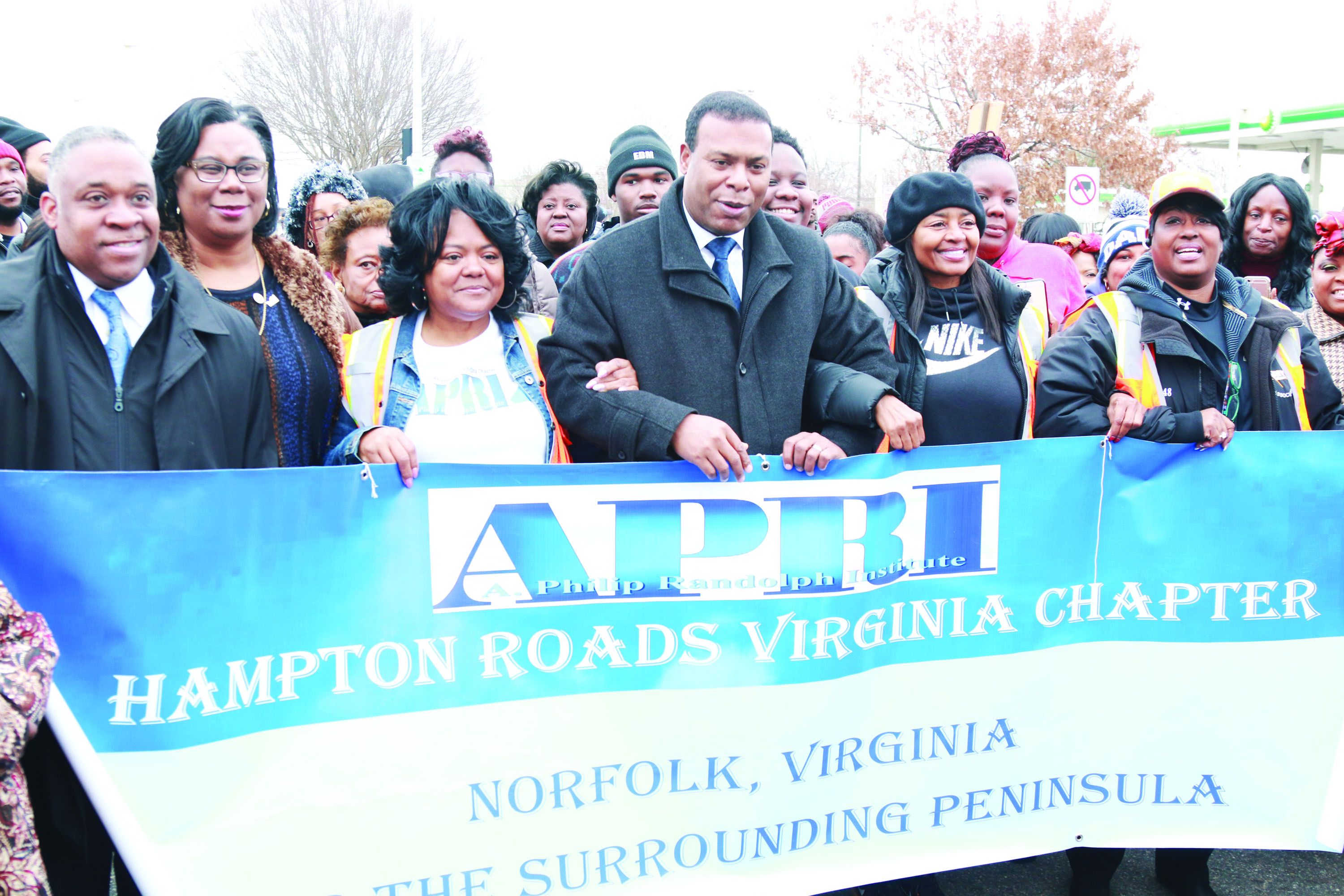 At the Historic Attucks Theater on Monday (Jan. 16), a well-attended program sponsored by the city of Norfolk presented an array of speakers and entertainment followed by a commemorative march to the King Monument on Church Street.

It was the city’s second observance. On Sunday night, a concert, “Songs for a Dreamer – A Tribute to Dr. Martin Luther King, Jr.,” featured the Virginia Symphony Orchestra at Calvary Revival Church. During that program, an award was presented to noted NASA mathematician Katherine Johnson.

Councilwoman Mamie Johnson hosted the Attucks event. She said the legacy of Dr. King should be viewed “not just from the past but the legacy for our children tomorrow. We celebrate a day of service to give back to others, especially those who are truly in need.”

Councilman Paul Riddick, who has the longest tenure on council, delivered the opening address where he applauded the fact that most of Norfolk City Council members, including Mayor Kenneth C. Alexander, were in attendance.

He noted the Norfolk Council is reflective of King’s dream of equality because there are four men, four women, and four Blacks on the panel.

Riddick called for attendees to do more than “come out, hold hands and sing ‘We shall overcome.’”

Instead, he asked, what could we do this year “to help those less fortunate.”

As the audience filed into the theater, a speech made by Dr. King in 1967 at Sanford University entitled “Another America” was being played over the public address system.

During the King speech, Riddick said King noted that to overcome the problems of his day, Blacks could not do it by themselves, but with the help of the White community and public and private institutions.

“What’s so bad is, in 2017, many of our cities, even in the city of Norfolk, are faced with the same problems. It is very important that we stick together to make life better for all of us – our citizens – especially the less fortunate.” “We see a difference in where America is going,” he said, “to a point where racial issues are erupting in the cities.”

But while Trump will wield immense power in the White House, Riddick said it is important to realize that “local government is the most important part of your lives.”

In May the Norfolk City Council will adopt a budget which will go into effect July 1. He urged the audience to lobby their elected officials, to ensure that concerns are addressed by that process.

He said while local governments can create positive outcomes for people’s lives, there can be a dark side, especially for the less fortunate.

As an example, he cited the city of Norfolk’s tearing down most of its public housing communities.

Although lack of funding has slowed the demolitions, especially of the latest target, Tidewater Gardens, Riddick warned that it still could take place there.

“This is not a public housing issue,” he said. “It is a moral issue … it is for all of us. Our children’s lives need to be made stable.”

Riddick reminded the audience of past city history which he called “insensitive.” He said Norfolk was the first city in the country to resegregate its public (elementary) schools, after a brief period of court-ordered desegregation, turning its back on complying with the Brown decision declaring racially segregated schools illegal.

Councilwoman Angelia Williams Graves commended Riddick for his bluntness and telling it “like it is.”

Graves mentioned that each year, politicians and preachers remind us with honorable and kind words about Dr. King’s legacy.

She then asked the audience what kind of legacy would they leave for the future.

City Mayor Kenneth Alexander issued the audience a challenge “to live up to Dr. King’s dream by serving.”

“You do not have to have a college degree…what you need is a heart full of grace, mercy and compassion,” Alexander said. “If you really want to serve, have a soul generated by sincerity. Find an organization…don’t create another one.. we have enough … but serve.”

At one point, the group, Teens With A Purpose, performed a series of spoken word poetry and rap music to reflect the views of the youth about history and how it reflects on the issues of gender, sexual identity and urban life today.

“At this time in our nation’s history, it is more important to be here to remember what we are working for,” said the newest member of the council, Martin Thomas. “It is time to celebrate the first African-Amerixan President in Barack Obama and the first African-Amerixan Mayor Kenneth C. Alexander. There is more work to do. The Attorney General recently wrote… that every Virginian has the right to live, learn, and work without fear of harassment, discrimination and mistreatment …”

Boone, who came from humble beginnings, urged members of the audience, especially the youth, to use their natural ability and hope to “propel” their lives forward.

Local Nation of Islam Leader Albert Muhammad said that despite the rift with NOI leaders The Honorable Elijah Muhammad and Malcolm X, Dr. King was a fighter for equal rights.

Muhammad said that African-Amerixans should take more responsibility for their community economically, by opening businesses, and forming community watch programs to “give the police a break” by safeguarding their communities.