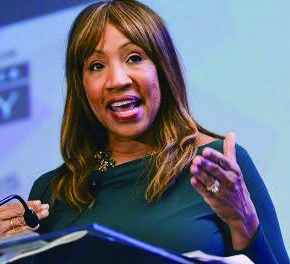 WASHINGTON, D.C.
African-American women’s consumer preferences and brand affinities are resonating across the U.S. mainstream, driving total Black spending power toward a record $1.5 trillion by 2021, according to African-American Women: Our Science, Her Magic, a Nielsen report released recently.

Self-made and self-reliant, the number of businesses majority-owned by Black women grew 67 percent between 2007 and 2012, more than all women combined. The latest U.S. Census figures show African-American women have majority ownership in more than 1.5 million businesses with over $42 billion in sales.

In Nielsen’s new Diverse Intelligence Series report, the global performance management company paints a portrait of Black women as trendsetters, brand loyalists and early adopters who care about projecting a positive self-image. They are playing an increasingly vital role in how all women see themselves and influencing mainstream culture across a number of areas, including fashion, beauty, television and music.

Young, independent and 24.3 million strong, Black women comprise 14 percent of all U.S. women and 52 percent of all African-Americans. Relatively young with an average age of 35.1 years (versus 42.8 for non-Hispanic White women and 39.4 for all women), they have enjoyed steady growth in population, incomes and educational attainment. Sixty-four percent enroll in college right out of high school and 23 percent over age 25 have a bachelor’s degree or higher (up from 18 percent in 2005).

“Black women have strong life-affirming values that spill over into everything they do. The celebration of their power and beauty is reflected in what they buy, watch and listen to, and people outside their communities find it inspiring,” says Cheryl Grace, Senior Vice President of U.S. Strategic Community Alliances and Consumer Engagement, Nielsen.

“Understanding how Black women’s values affect their buying decisions has long been a marketing necessity. Now, marketers must also recognize the intercultural influence of Black women on the general market as an increasingly vital part of how all women see themselves, their families and the rest of the world.”

Highlights of African-American Women: Our Science, Her Magic include:

Independent and self-made
• 64 percent of Black women agree their goal is to make it to the top of their profession (95 percent higher than non-Hispanic White women).
• 58 percent agree that they don’t mind giving up their personal time for work (20 percent higher than non-Hispanic White women).
• 14 percent of Black women have annual incomes of $50,000 or higher (up from 9 percent in 2005).
• Ages 35–49 have the highest income within the Black female cohort.
• For Black millennial women (18–34), 81 percent have never been married, up from 71 percent in 2005.
• With an average household size of 2.47, 29 percent of total Black American households contain a married couple.

Social media and technology
Especially adept at using technology and social media to trade opinions and offer recommendations, Black women (18+), more than any other demographic group, have taken social media and adopted it for higher purposes. Whether they are buying cars, jewelry, smartphones or beauty products, the advice, referrals and feedback they receive from friends and community play an important role in Black women’s purchases.

Television
Black women (18+) spend more time watching live TV, listening to the radio and using multimedia devices than total U.S. women. Empire on FOX was the most watched show during the 2016–2017 broadcast season among Black women 18+, followed by The New Edition Story (BET), Star (FOX), The Have and the Have Nots (OWN) and Love and Hip Hop Atlanta (VH-1) – rounding out the top 5 shows.

Environmental causes
Black women have joined the global movement toward ecological sustainability and see saving the planet through the lens of guaranteeing clean air, water and most importantly safety for their own families and communities.
• 74 percent of Black women agree global warming is a serious threat (7 percent higher than non-Hispanic White women).
• 55 percent agree a company’s environmental record is important in their purchasing decisions (13 percent higher than non-Hispanic White women).
• 59 percent of Black women agree they are willing to pay more for a product that is environmentally safe.