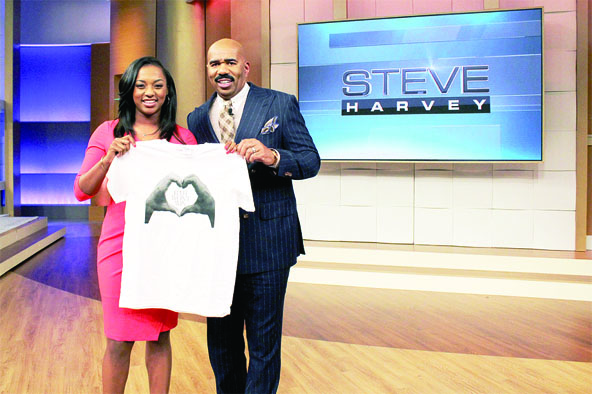 A Newport News resident appeared recently on the Steve Harvey Show to talk about her hashtag campaign against hate. Alana Simmons started the campaign in memory of her grandfather who was killed in the S.C. mass shooting last year.

Simmons of Newport News lost her grandfather, the Rev. Daniel Lee Simmons Sr., in the racially charged church shooting at Ebenezer AME Church in Charleston, S.C.
Harvey dedicated his entire February 4 show to having an open and honest discussion about religion, in hopes of narrowing the gap between knowledge and fear.

As part of the specialty hour, he welcomed 26-year-old Simmons, who explained that the hashtag #HateWontWin came about after she spoke in court, telling people that her grandfather was all about love, even though he was taken away by an act of hate.
“Hate won’t win,” Simmons said in court. “Before we got out of the courtroom, it was a nationally trending hashtag,” she told Steve Harvey.

Simmons’ social media campaign in her grandfather’s memory encourages people to perform random acts of love.
Her #HateWontWin movement even caught the attention of President Obama, who invited Alana to the White House.
To view clips of Alana Simmons on “Steve Harvey,” visit our website at www.thenewjournalandguide.