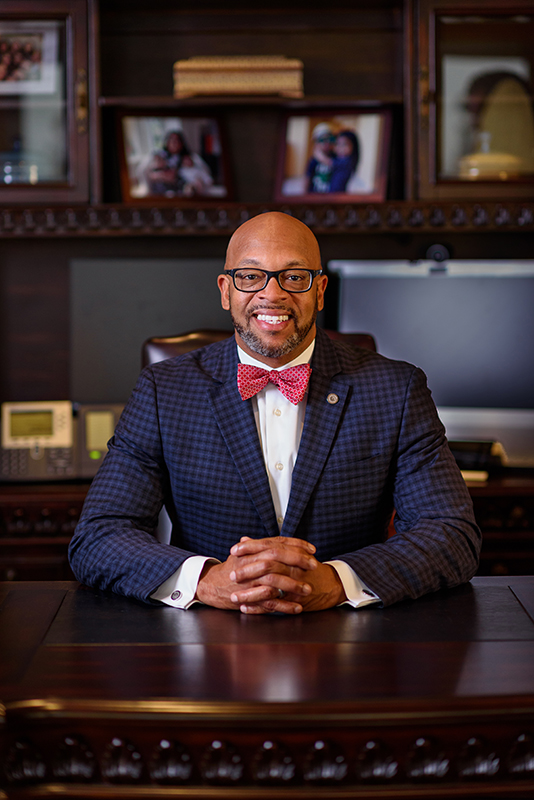 Dr. Hemphill has been President of Radford University since 2016 and will be replacing President John R. Broderick, who is retiring as president after 28 years at Old Dominion and 13 years as its President.

Dr. Hemphill will now lead the largest four-year university in Hampton Roads. The historically white institution has a large enrollment and graduation rate of African American students in the region.

With Dr. Hemphill’s appointment, he writes the most recent academia chapter in Black history in Hampton Roads at this point in time.

Dr. Hemphill has led Radford since 2016 and has been hailed as an innovative and forward-focused leader there. He previously served as president of West Virginia State University for four years and vice president for student affairs and enrollment management at Northern Illinois University for eight years.

He will be introduced to the community at a virtual “Get to Know President-Elect Hemphill” event at 2 p.m. Friday, Feb. 19.

“It is both an honor and privilege to be selected as the ninth president of Old Dominion University, a dynamic public research institution that has proudly served the Hampton Roads region and positively impacted the Commonwealth of Virginia,” Dr. Hemphill said.

Under Dr. Hemphill’s leadership, Radford experienced record enrollment in the fall of 2019 and 2020.

He implemented a Student Success and Retention Plan and established an Academic Success Center to improve the first-year experience and focus on retention and graduation.

He has maintained an active presence in the classroom, teaching such classes as Communication and Leadership, Personnel Services in Higher Education and African American Imagery in the Mass Media. Dr. Hemphill is co-writing two books and has written or co-written more than two dozen journal articles on topics including student activism and student orientation.

Dr. Hemphill received his bachelor’s degree in organizational communication from Saint Augustine’s University in Raleigh, North Carolina; his master’s in journalism and mass communication from Iowa State; and his doctorate in higher education administration and policy studies from the University of Iowa.

He is married to Dr. Marisela Rosas Hemphill, the first lady of Radford University, who is an advocate of providing students with multicultural and global experiences. Her previous positions include director of student activities at Colgate University in Hamilton, New York. She received her doctorate in student affairs administration and research from the University of Iowa.

The Hemphills are the parents of 8-year-old twins, Catalina and Cruz. Dr. Hemphill also has two adult children, Jada and Jordan.

Dr. William R. Harvey, who was named President of Hampton University in 1978, has the longest tenure of any university president in the state.

In addition to the newly arriving presidents at ODU and TNCC, Norfolk State University’s Dr. Javaune Adams-Gaston was named last year the seventh president and third woman to lead that university. She is scheduled to be inaugurated this spring.

Three of these leaders, including Hemphill, are graduates of Historically Black Colleges and Universities (HBCUs).

Dr. Harvey, who will be retiring next year after 43-years at the helm of Hampton University, received a bachelor’s degree in history from HBCU, Talladega College, in his home state of Alabama in 1961. He

received a doctorate in higher education administration from Harvard University in 1972. He held senior administrative positions at Tuskegee University before coming to Hampton.