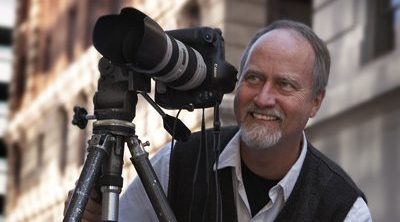 Stroll through “The Shipyard Workers of Hampton Roads” exhibit which runs from June 2-Aug. 6 at the Portsmouth Art and Cultural Center and notice how a hobby transported Glenn McClure from Ingleside to Ireland.

Although McClure has come a long way since he grew up in Norfolk’s Ingleside, and launched his first six-hour street shoot on Colonial Avenue in 1998 with a 4-by-5 view camera – and film, his technique has not changed. That is why it’s, well, hard to look away. Whether it is the photo of the steely-eyed man who wears a fedora, a faint scar, and signs of mental illness in his first shoot on Colonial Avenue; or his Portsmouth exhibit that shows about four dozen or so shipyard workers who wear grit, grime, and raw verve like a second skin.

Organizers hope the exhibit on shipyard workers will cause a new demographic to stroll through the museum. But it’s not the first time McClure has aimed his camera at a demographic that may not stroll through museums. He has aimed his lens at total strangers on the street. He has snapped photos of Hampton Roads watermen, those who make their living as crabbers and fishermen.

And while it took him about three years to wrap-up this exhibit on shipyard workers (because it took about a year to obtain permission and about two years to photograph dozens of shipyard workers at BAE Systems Norfolk Ship Repair in Berkley). “I am totally happy with the work. As a visual artist you want people to see it,” he said.

“You cannot just go into a shipyard and start aiming your camera,” McClure explained. “I worked with my wife, Marshall. She is so important because she interviewed each person we photographed. We didn’t have a list of names. We didn’t have a plan. We just started in. It went great. My wife would interview somebody. And I would tell the person to concentrate on my lens, not on their buddy over in the corner trying to make them laugh.”

McClure and his wife, Marshall, also released a 192-page book on the shipworkers in May. “All of the photos are in Black and white,” he explained. “I use Black and white photos because it shows texture and makes a photo look timeless.” McClure paused for a moment and said, “People should come to this exhibit because these are our friends and neighbors who live down the street from us and work for the greatest industrial employer in Virginia. These workers are proud to do what they do. They work on Navy Ships and are proud of what they do. It is dangerous hard work but it is also highly skilled work and takes years of training.”

This exhibit is awesome, said Stephen Grunnet, assistant curator at Portsmouth Art and Cultural Center. “People should come to this exhibit because Glenn McClure has been doing this for years. His eye is spot-on. He always captures people in their element. Throughout history artists have looked at the maritime industry and focused on the ships or the landscape. But this exhibit focuses on the men and women who make this region what it is today.”

“It’s like you’re opening up a history book, Grunnet added. “The history of shipbuilding goes hand-in-glove with the history of Portsmouth, Va. Each person in these photographs has a story behind them and what their role is at the shipyard. It would be a crime to miss such a visually and historically stimulating exhibition.”

In a sense, McClure has come full circle. He grew up in Ingleside, bought a camera at age 19, set-up a tripod and began to teach himself how to shoot. A few years later, he began working in advertising.

But scroll through his online portfolio. Specifically, his hobby has catapulted him from Colonial Avenue to many distant lands. His weighty online portfolio shows men in kilts carrying bagpipes in Ireland. In Italy, shy girls in frilly white dresses wait for their first communion. In Spain, there are breathtaking sunsets, cobble sidewalks and towering mountains.
In other words, he has come full circle because his online portfolio contains local and exotic photos. You will also see familiar local faces such as Dr. L.D. Britt, department chair at Eastern Virginia Medical School, Andrey Kasparov, a composer and Old Dominion University professor.

His work has been featured in numerous museums including the Jacksonville Center for the Arts, the Chrysler Museum, and the Virginia Museum of Fine Arts in Richmond.