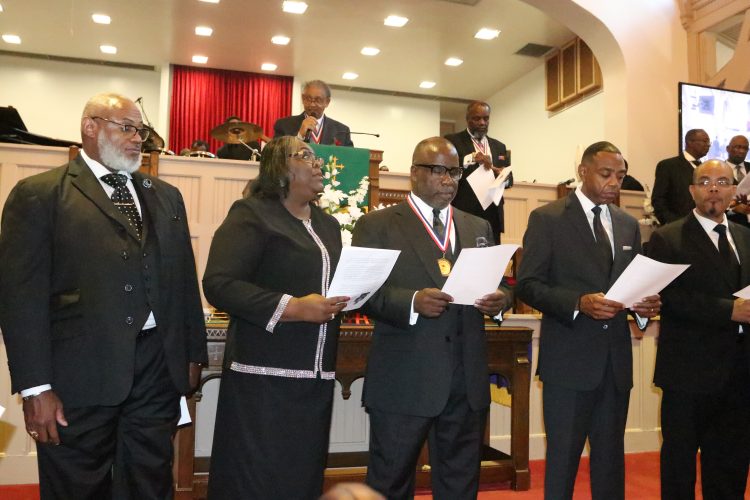 This year is no different.

This year’s keynote speaker will be Rev. Dr. Reginald Williams, Jr., Pastor of the First Baptist Church of University Park in Chicago. And his keynote sermon will center around the theme of a book he co-authored: ”To Serve This Present Age: Social Justice Ministries

in the Black Church.”

The book’s theme reflects the event’s 2019 theme: “The Struggle is Still Before Us.” focusing on the prophetic call to do justice as it recalls the storied history of the Black church’s leadership in the Civil Rights Movement led by Dr. Martin Luther King, Jr..

Both resonate with the vision of that Rev. Jones, who has pastored at Norfolk’s Shiloh Baptist Church for seven years, and other new leaders of the century-plus-old TMBMC, want to project going forward.

Each Monday at mid-day, over 50 plus TMBMC members from all over the region, gather at the Historic First Baptist Church on Bute Street to network, tend to organizational business and discuss any socio-economic issues they believe should be addressed.

Dr. Jones said he was born in the Titustown section of Norfolk to a working-class family which later moved to Chesapeake where he attended Crestwood High School.

He attended Norfolk State University where he majored in Political Science with designs on becoming a lawyer.

But, he was obligated to fulfill an ROTC Commission to the U.S. Army, which stunted that law ambition.

Instead of accepting one of many of the offers to attend law school, he felt the calling to the ministry as an Army Chaplain where he provided spiritual guidance to fellow soldiers for 28 active and reserve years.

His pastoral skills were bolstered, like many of his brethren, including the King Day speaker, at “the” Master of Divinity program at the Samuel DeWitt Proctor School of Theology at Virginia Union University.

After the military, he was the Director of Counseling at Hampton University, then led the flock at the New Beach Grove Baptist Church in Newport News before being summoned to the Pastor’s Chair at Shiloh.

At age 20 Jones said while attending NSU, he joined the congregation at Shiloh.

The TMBMC is made up primarily of Baptist Ministers, but Jones said there are other denominations represented and welcomed to enter its ranks.

The age range varies and women make up more than half of its membership and provide a firm and respected voice in the organization, he said.

Dr. Jones has over three decades of services in the ministry. So does Dr. Blackwell, who said the “conference is a place of refuge, fellowship, equipping, encouragement, empowerment, and mission.”

He said the organization’s effort on “Making An Impact” has three tiers: to make an impact in the life of the pastors and ministers of the conference; creating an exciting program conducive of refuge; fellowship, equipping, encouragement, empowerment, and mission.

“I believe… as pastors and ministers dictate, we are and have been called as agents and advocates of change and justice,” he said. “It is our calling to be an active presence and voice not only in the churches we lead …. but also in the communities. (where) we live.

Individually, we impact change through our presence and voice, but as a conference, our impact is much greater.”

Dr. Jones said he wants the conference’s voice to be not only more evident on issues, but also to awaken people “who do not know it exists” and “are oblivious” to the issues it wants to focus on.

Jones said the lack of the public’s knowledge of the conference’s mission and purpose is due in part because “it has pretty much been ‘self-contained insolent”’and has failed at outreach to the communities, where,” Jones said, “we want to make an impact.”

Jones said conference members want to get the community “used to realizing that it is here to help.”

Many of those issues, Jones said, are present just beyond the front doors of conference members’ sanctuaries.

“We recognize at this day and time there are many churches…large churches that make a great impression,” he said, “but may not be making as much of an impact as they can on our community.”

Rev. Jones mentioned he and other leaders of the TMBMC have already spoken out on, and talked to their respective city leaders, about their concerns on various issues to “change the state of the arc” on a long list of issues he and his fellow members know exist just outside their sanctuaries’ front doors.

At the top of the list is the issue of public education, especially as it pertains to schools serving African American children.

He said the disparities related to social justice is another issue and the need for the call for reforms.

He said the TMBMC stands with Black residents and environmental justice activists who have been fighting against the 600-mile long Atlantic Coast Pipeline (ACP) running from West Virginia through Virginia to North Carolina. Also, the 9-mile “Connector” that is linking up with the ACP in Chesapeake.

The Connector has been built under streets through neighborhoods from some of the poorest residents, as well as through the property where First Baptist Berkley in Norfolk sits, and through a middle-income Black enclave in Chesapeake.

The TMBMC has joined the anti-ACP coalition and Jones has spoken against the project before Norfolk’s City council.

Another good example of urban environmental racism, Jones said, is the effort by Select Recycling Waste Services, Inc., (SRWS) proposing to open a Recycling and Garbage collection facility in the Bruce Park/Barraud Park section of Norfolk.

The organization supported former Portsmouth Councilman Mark Whitaker, who has legal issues related to a credit union his church ran in Portsmouth. Rev. Jones said it was an effort to silence the only “prophetic voice on that city’s governing panel.”

The churches of many of his members encircle the three public housing communities targeted by the St. Paul’s Redevelopment Project impacting many of Norfolk’s poorest Black residents.

Jones said TMBMC members want to be a voice in that conversation, and he said city officials have “promised” to keep them abreast of the plans to relocate, raze and rebuild a new community, “before they happen.”

He said his biggest concern about the redevelopment project is the city’s willingness to “displace hundreds of families and people without any reasonably priced housing on the horizon.”

“We want to enter into the discussions we have not entered into the past,” he said.

Asked about the lack of commercial investment in the eastern urban core of the Norfolk, Jones was harshly critical of the “Neo-Negroes” in Norfolk who think they are “post-racial” and who work and support corporate interests that do not support Black causes or commerce.”