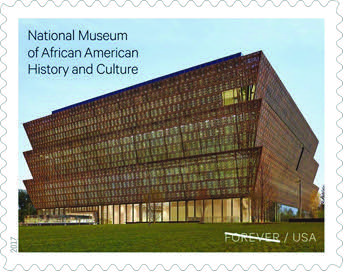 The stamp art is based on a photograph by Alan Karchmer. Text in the upper left corner of the stamp reads “National Museum of African-American History and Culture.” Art director Antonio Alcalá designed the stamp.

“I am humbled that the museum was chosen for this special stamp,” said Lonnie G. Bunch III. “It is fitting that the image on the stamp is the building itself, as this building, by its very design, stands as tribute to the African-American experience.”

The Smithsonian’s National Museum of African-American History and Culture has welcomed nearly 3 million visitors since opening in September 2016. Created by an act of Congress, the NMAAHC is the only national museum devoted exclusively to African-American life, art, history and culture.

The museum occupies a five-acre site on the National Mall in Washington, DC, where its resemblance to the crown-like capital at the top of a Yoruban column is meant to convey faith, resilience and hope.