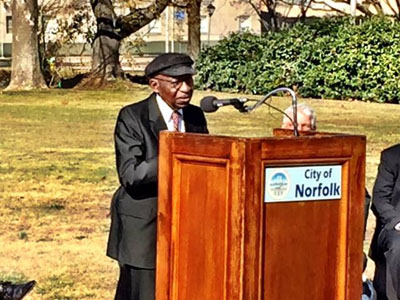 For the past four decades George Banks has had a hand in building affordable housing in the Berkley section of Norfolk and other sections of the region.

He is the chair of the Beacon Light Civic League Community Housing Development Organization (CHDO).

Over the years, the agency has planned the development of and acquired millions of dollars in government funds for 1,000 new housing units for low income and working class residents of this region.

Banks has also been part of the development and management teams which have planned, developed, secured financing or managed low income housing complexes as far away as Smithfield.

In the case of Berkley, starting in 1968, the new developments replaced “just old shacks, which were heated by wood burning stoves and lighted by coal oil lamps,” Banks recalled.

“When people moved into those new homes, they did not know about indoor plumbing, running water, central air or even how to work a shower,” Banks said recently.

Now in honor of the long period of dedication “to helping my people live a better life” the newest housing development in the Berkley Community will bear his last name.

The new 50-unit affordable housing complex to be located on a vacant lot at Main and Liberty Street will be named “Banks At Berkley.”

The development is a project of the WODA Group, out of Columbus, Ohio.

Bruce Watts, a former official with the Norfolk Department of Development, is heading the company’s Virginia office and overseeing this and other projects in the region.

Watts works out of the WODA Virginia office, located in the old NCP Saving and Loan Building across the street from where Banks At Berkley will be built.

Watts was one of the major players when the Berkley Shopping Complex, anchored by the Farm Fresh Supermarket, developed in that neighborhood over a decade ago.

The $8 million dollar development named for Banks, is devoted to affordable workforce housing and the rents will range from $700 to $900 a month.

Watts said the four-story building will have commercial space on the ground floor with public and exhibition space. The upper three floors will have 1, 2, and 3-bedroom apartment units for rent.

The land was bought from the Norfolk Redevelopment and Housing Authority, according to Watts. Construction is underway and should be completed by the end of 2016.

The project is being funded in part with Virginia Department of Housing Agency (VDHA) tax credits.

When the project is finally completed and dedicated, there will be an exhibit featuring the history of Berkley and the contribution of Mr. Banks on display in the community room of the building, according to Watts.

“We have worked with the South Side Coalition and the Beacon Light Civic League the past three years to get this done,” said Watts. “Mr. Banks was very humbled when I asked him if we could use his name. This development is dedicated to the history and contributions of Mr. Banks, as well as the city of Norfolk.”

Born in Berkley on 10th Street (Middlesex now), Banks served in the U.S. Army at a time when the nation was fighting the Korean Conflict.

After leaving the service, he returned home and worked for the Norfolk Naval Supply Station.

At age 23, Banks said he began to invest his youthful energies into the NAACP and the civic league and other activities “to make a difference and change the lives of all the people in our community.”

Beacon Light’s CHDO and other organizations like it are the offspring of the nation’s War on Poverty, which partnered with cities or nonprofit groups to fund federal revitalization efforts of poor and blighted sections of urban communities.

Using a program called the 235 Program which provided funding and the Housing and Urban Development’s (HUD) Models Cities Program, Berkley leaders attracted money initially for infrastructure costs for eight homes which were built in Berkley in 1968.

This is how the Beacon Light CHDO came to life and the revitalization of Berkley began in earnest in the late 1960s.

Banks said when the development effort was launched, the leaders of the Berkley community worked to avoid the situation where existing residents would be displaced by gentrification, which took place in the Ghent community of Norfolk.

Gentrification occurs when the residents of blighted areas are moved out with the promise of having an option to return to redeveloped communities. However, when the new development rises, the old residents are too poor to afford the cost of housing in the renewed community.

Before redevelopment, the upscale Ghent neighborhood near downtown Norfolk was one of the most blighted areas with a large poor and working class population of Black people.

“We did not want to have the ‘Ghent Effect,’” said Banks. “We worked in partnership with the government and maintained control of the first and future developments. We wanted development and change, but we did not want to destroy the lives and attachment people had to their communities. We wanted to provide an affordable place they could call home.”

Banks recalls being “the baby” at age 23, among elders who mentored and schooled him in “civic responsibility.” Berkley’s strongest, talented and trusted leaders such as Harry Hicks, Thaddeus White, Horace Downing, Minnie Maddrey, and Margaret Johnson were among them.

“They were the worker bees and visionaries who toiled to transform the place they called home.”

Banks is now fondly called the “Mayor of Berkley.”

Today, at 83, he has outlived most of the leaders who worked to transform Berkley and maintain its dignity for African-Americans and other racial groups who choose to call the area home.

“After 60 years, it has been a long struggle to realize what we see today in Berkley,” said Banks. “Not bragging, but I am the last thing jumping from that group of people who had the vision.”

He continued, “Usually when they name projects of this importance after people, they are in the grave. I am proud of what we have done over the years. I am just so happy to see it come about while I am alive to see it.”