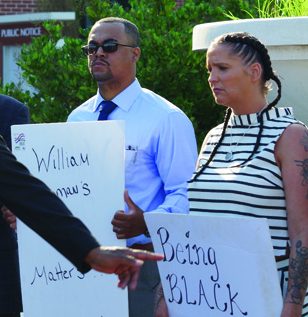 Rankin, who was investigating a shoplifting report at the Walmart on Frederick Blvd., shot Chapman after a confrontation about the incident turned violent. Police body camera and store surveillance footage showed Chapman knocking a taser out of Officer Rankin’s hand after being tased. After a short scuffle, Rankin pulled his gun and shot Chapman in the chest and forehead.

The jurors believed Commonwealth Attorney Stephanie Morales’s argument that Rankin, who was trained in mixed martial arts, did not need to shoot a man to death in what amounted to a fist fight. Chapman’s murder marked the second time in four years that Rankin had shot a suspect to death. In 2011, Rankin was cleared by a jury after he shot to death a white Kazakhistan native in Olde Town Portsmouth while investigating a burglary call.

Rankin became only the 13th police officer nationwide since 2005 to be convicted of murder or manslaughter by a jury trial according to published media reports. The increased use of smartphone cameras, police body cameras, and social media have placed police tactics under greater public scrutiny and led to calls for reform in community policing. Last week, Norfolk Mayor Kenneth Alexander announced that all police-involved shootings will now be investigated by the state police in an effort to build trust with the community.

Rankin’s conviction both surprised and relieved many within the black community of Portsmouth and across Hampton Roads. The Portsmouth NAACP released the following statement: “Justice has finally come not only for William Chapman, but justice also came for Trayvon Martin, Michael Brown, Eric Garner, Tamir Rice, Sandra Bland, Freddie Gray and for all those unheard souls who have fallen victim to the sting of death at the hands of rogue police officers across the nation.”

The attorney for the Chapman family said in media reports that the family in planning to file a civil suit against the City of Portsmouth, Rankin, and the previous chief of police. On Sunday evening, (Aug 7) members of the Coalition for Black Americans, who were dissatisfied with the verdict, attempted to stage a sit-in at the Portsmouth Walmart, but were turned away at the door by management who decided to close the store early to avoid the demonstration. Some members of the group were banned permanently from the Portsmouth store and all Walmart locations after dialogue with management broke down. A few members took to social media to express their frustration.