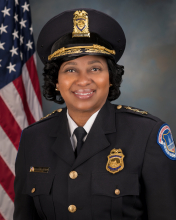 WASHINGTON, DC
In the wake of this past week’s thwarted attack on the U.S. Capitol and the resignation of the Capitol Police Chief Steven A. Sundin, Yogananda D. Pittman has been named to serve in the role as acting chief.

The new Acting Chief is a 1999 graduate of Morgan State University with a Bachelor of Science degree in psychology. She previously served in the capacity as assistant chief of police for Protective and Intelligence Operations and will continue with these duties.

As the acting chief of police, Pittman will be responsible for administering the Department in accordance with applicable laws and regulations, and ensuring that organizational objectives are met, including the protection of the U.S. Capitol.

Dr. David Wilson, Morgan University President, said about Acting Chief Pittman, “This appointment is notable for our nation and our University, as she will be the first woman and first African American to hold the post of leading the USCP. We commend this wise decision as it is widely known that Morgan graduates are purposefully prepared to not only Grow the Future, but to Lead the World.

“I implore Morgan graduates and members of the Morgan family around the world to join me in a full show of support. Together, we celebrate this recognition of leadership and congratulate one of our own, Acting Chief Yogananda D. Pittman, on her achievement. She is undeniably Morgan Made!”

Follow us
In this article:Feature, Featured, Morgan State, U.S. Capitol