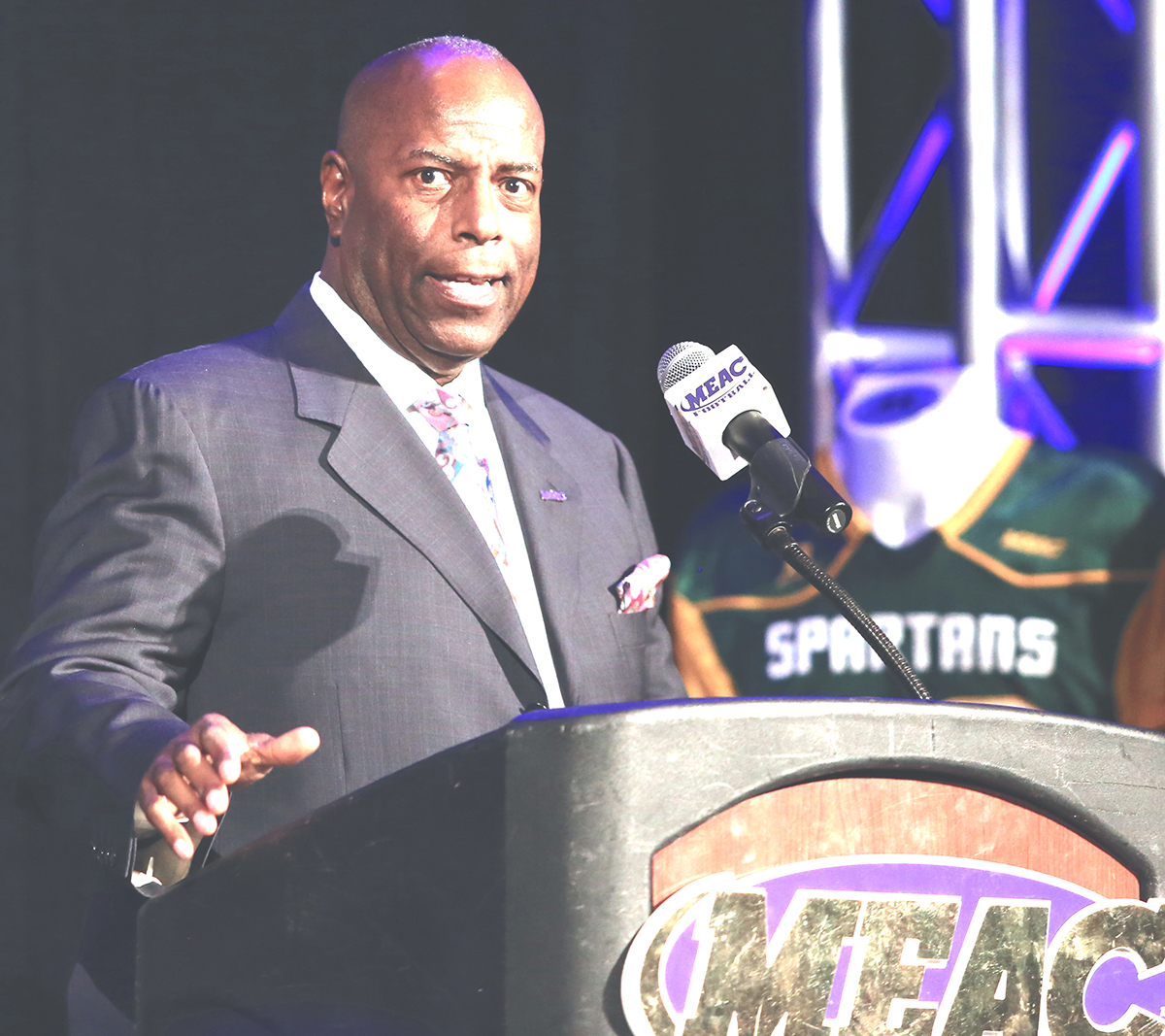 NORFOLK
Dr. Dennis E. Thomas, who has completed his 19th year as Commissioner of the Mid-Eastern Athletic Conference (MEAC), announced recently that he is retiring in December. As the third full time and longest-tenured Commissioner in the 50-year history of the MEAC, Thomas gained the respect and distinction as one of the leading collegiate athletics administrators in America.

“It has been an honor and a privilege to serve as Commissioner of the MEAC for almost 20 years,” said Thomas. “But first, I must pay homage to my parents, Russell and Marjorie Thomas for setting the direction, expectation and accountability for my brothers, sisters, and myself. Without their guidance, discipline, and unconditional love, I would dare to think the path I would have taken. The accomplishments and recognition achieved by the conference during this time could not have been possible without the incredible support of our member institutions and everyone associated with the MEAC.”

Dr. Johnson O. Akinleye, Chair of the MEAC Presidents and Chancellors Council noted Dr Thomas has served with “distinction, dedication, and unyielding commitment. I commend his unparalleled leadership, experience, and innovative stewardship of the MEAC. We wish him Godspeed as he starts his well-earned retirement journey.”

Presidents of the MEAC schools joined in saluting the MEAC Commissioner on his lengthy service. Dr. Tony Allen, President of Delaware State University, said, “From a legendary career on the gridiron to an unprecedented tenure of a bold athletic conference, he has led with distinction and grace and has set a clear example for us all. I’m proud to always call him, Commissioner, brother and friend.”

Wayne A. I. Frederick, President of Howard University, said Thomas’ leadership has positioned MEAC to move forward with strength and to persevere through any challenges it encounters in the future.”

Dr. Javaune Adams-Gaston, President of Norfolk State University, said, “During the two years I have served as Norfolk State University’s President, I have watched Dr. Thomas work tirelessly to improve thousands of student-athlete successes at Historically Black Colleges and Universities. He has provided opportunities for corporate and external partnerships for the Mid-Eastern Athletic Conference, developed initiatives to increase student-athlete graduation rates, and keep the organization in good financial standing.”

Under his leadership, Thomas is credited with implementing the Highest Graduation Success Rate Award for the MEAC, awarding $25,000 to the institution with the highest graduation rate for their athletic program. During the program, $275,000 has been distributed to MEAC institutions.

Other accomplishments include establishing a partnership with the NFL to improve collegiate and MEAC football officiating. Under his leadership, the MEAC became the first FCS Conference to have a female officiate football games in 2002.

The Council of Presidents and Chancellors will conduct a national search for a successor, which will begin immediately.