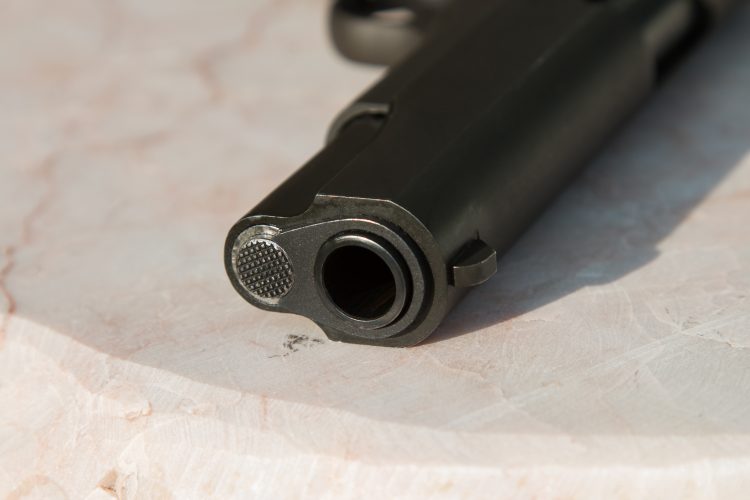 The National Rifle Association is attempting to hold 300 million Americans hostage to their views on gun purchases, gun ownership and the non-culpability of its members. They use their bought-and-paid-for lap dogs (the National and State Congressmen, Senators, Governors and elected officials) to whom they have made massive cash contributions to “fetch” their heavily lobbied machine-gun-sticks they intend to shoot and beat us to death with. In the 2016 presidential election alone, the NRA spent fifty-five million dollars.

Ninety-six mass shootings have occurred since the last gun legislation (the 1986 Brady Bill.) It doesn’t take a mathematician to figure out that’s three school or mass shootings a year for thirty-two years. The thirty-two people killed at Virginia Tech attests to our state’s participation in these grim statistics.

Since the 1960s’ “white scare” from the Black Panthers, the NRA has calculatingly used fear tactics to buy politicians of both parties. Our nation has been paralyzed – held at gunpoint by the NRA’s relentless harping on their members’ “rights.” The NRA played both sides against the middle. By buying Republicans and Democrats so it did not matter who won, the NRA won.

If any legislator dared speak up, they de-funded the dawg-whistle-blower and found a new “pet” candidate to teach to play “fetch” as instructed. For thirty-two years of whimpering and yelping out back, the NRA has brow beaten us senseless and to death. After the Sandyhook Elementary School massacre in 2012, 85-90% of all Americans wanted serious changes to the gun laws. The NRA went on the offensive and threatened to pull its funding handshakes from “their” sock-puppet-legislators, so no legislation was passed. It took San Bernardino, Orlando, Charleston, Las Vegas, Texas, Oregon, and now Parkland, Florida to awaken the youth and parents of America to finally demand change.

The NRA had the audacity to say gun toting was a God given “right.”

Memory served the straight-out liars in that case. The NRA doubled down by claiming that the Liberal Left wanted to take away Second Amendment Rights, a boldfaced lie. This intentional distortion worked; gun owners mobilized once again.

Common sense is a simple concept. It makes sense to us 300 million non-NRA members to protect our children, families and ourselves. After all, it is not NRA Members who are doing the dying; they only do the pointing/ trigger pulling and the bullets do the killing by themselves.

The NRA believes their minority right to bear arms belief is more important, than the rights of the majority of U.S. citizens, to live peacefully and safely. (The nation of Japan, for example, had only ONE gun-death last year.)

1. Nationally you must be 21 years of age to buy a gun period, ALL hand guns and rifles.

2. No semi-automatic guns of war, No large clip magazines, No bump stocks, No Ak-47s, No Ar-15s will be sold to the public. If you want to shoot those guns, go join the military!

ALL gun purchasers MUST go through a thorough Background Check, for all past military crimes, public crimes, and records of violence and/or mental instability. The 10-day waiting period is mandatory for all. Any “flags,” – no gun for you, end of story! No gun show loopholes!

4. All gun sales going forward must be signed off on by the manufacturer and gun dealer in order to promote a traceable transparency and liability.

The guns that are already on the streets are out there. We respectfully request they be registered in the event of any sale, gift, or change in ownership. Gun owners would be guaranteed that their existing guns would NEVER be taken away from them unless they show the violent symptoms so clearly exhibited by mass shooters. By registering every gun from this point forward, America will finally know just how armed our nation is.

Serial numbered guns will be traceable. There may be a Black market of illegal weapons at first, but for the most part, our nation will have regained control over the gun violence of mass-shooting-weapons. As we move forward, only those who are of age and who can prove in writing that they are not a threat to the rest of us 300 million citizens after the thorough national database background check, and 10-day waiting period, have earned the right to own a gun. Because of the lethal nature of guns, gun owners must earn the right to safely use legally acquired, registered weapons. No Flamethrowers, Period!

Finally the mothers of White school age children senselessly slaughtered in the presumed safety of schools have come to understand what Black mothers have been dealing with and reeling from since the 1960’s, 1860’s, 1760’s, and 1660’s -driving home DEATH’S most hollow points.

The reality is that Black Lives Matter, White lives matter, All lives matter the same. Today’s brave students are now showing Us (300 Million) that “Young Lives Matter” and that they will no longer passively accept being targeted. Our youth are finally putting the much needed CHOKER-Collar-Leash on the NRA. “… and a little child shall lead them.” (Source of statistics: NBC’s “Meet the Press” February 2018)

Sean C. Bowers is a local progressive youth development coach, author and poet, who has written for the New Journal and Guide for eighteen years. His recent book of over 120 NJ&G articles detailing the issues is available via e-mail at V1ZUAL1ZE@aol.com and he does make large-scale solutions presentations upon request.