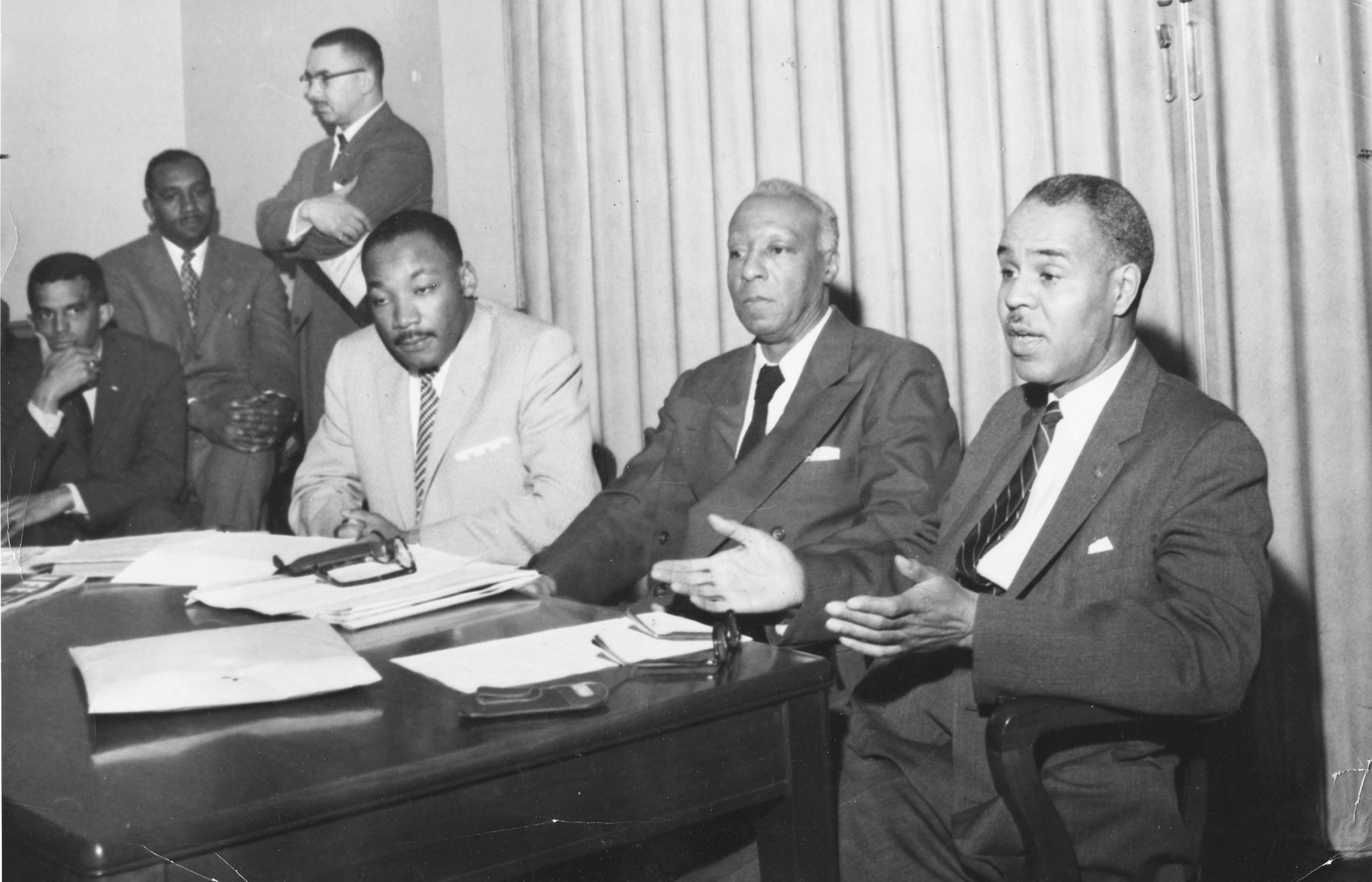 January 15, 2018 marks the 89th birthday of Dr. Martin Luther King, Jr.. As the nation and the world remember his birthday, observances also are underway this year to commemorate the 50th anniversary of his assassination on April 4, 1968.

During his short life of 39 years, Dr. King helped lead a Civil Rights Movement which ushered in laws and protections not only for Blacks denied before the implementation of Jim Crow segregation, but also for other minorities and women..

By 1955, Jim Crow segregation legally restricted where Blacks could live, work, be educated and participate in the nation’s electoral system.

But using the courts, lobbying for laws, and physically challenging and resisting segregation, despite a threat to their safety, activists worked and succeeded in dismantling it.

In Montgomery, Alabama, where King was a young pastor of Dexter Avenue Baptist Church on December 1, 1955, Rosa Parks refused to give up her seat on a street bus and was arrested. Blacks had used such resistance before, but failed. This time, Montgomery’s Blacks organized a boycott of the city’s transit system to protest her humiliation.

Rev. King was recruited to lead the effort to force the bus company to end its Jim Crow policy, which it did a year later.

The Montgomery Bus Boycott was a link in a chain of events during the 1940s and 1950s which generated the impetus for the modern Civil Rights Movement and launched King’s career.
It prompted similar actions in Tallahassee and Birmingham.

One of the most important links had materialized in 1954, when the Supreme Court declared “separate but equal” public schools illegal.

Four months before Parks wrote her passage in history in 1955, 14-year-old Chicagoan Emmitt Till, visiting relatives in Money, Mississippi, was accused of whistling at a White woman. In retaliation, he was kidnapped in the middle of the night by racists, beaten beyond recognition, shot, and his body was sunk in the Tallahatchie River.

During that time, A. Phillip Randolph was the leader of the most powerful Black union in the U.S., the Brotherhood of Pullman Car Workers.

In 1941, in an effort to pressure President Franklin D. Roosevelt to force companies producing military hardware to hire Blacks, he and Bayard Rustin, his chief strategist, devised a plan to have thousands of Blacks to march on Washington, D.C.

FDR responded with an executive order adhering to their demands.

Randolph converted that success to become the elder statesmen of a coalition of Black leaders which included King, Roy Wilkins, the Executive Director of the NAACP, Lester B. Granger, leader of the Urban League, and Congressman Allen Clayton Powell, the most powerful Black lawmaker at the time.

FDR was succeeded in 1953 by Republican Dwight D. Eisenhower with support from Blacks due to their respect for President Lincoln.

By the spring of 1957, the coalition of civil right leaders, notably King, was critical of the Eisenhower administration’s lack of support for civil rights advances, including the Brown Decision.

Led by King, the “Big 4,” as they were called by some, began lobbying the White House to secure a meeting with Eisenhower to urge the President to develop a friendlier policy position on the subject.

But for months their request was denied.

Eisenhower’s resistance, and an upsurge in White terrorist violence against Blacks in Dixie in early 1957, led King and several dozen other southern activists, to form the Southern Christian Leadership Conference, (SCLC).

The SCLC, in coordination with other civil rights groups, issued three demands to Eisenhower: support compliance with Brown vs. Board of Education; instruct Vice President Richard M. Nixon to travel throughout the South to look into violence against Blacks; and have Attorney General Herbert Brownell meet with Black activists to discuss federal protection for civil rights activists.

The White House ignored all three.

At the same time the President did lend soft support of a watered down civil rights bill being debated in the U.S. Congress, but was being bottled up by Southern Democrats.
Those rebuffs prompted the Black leaders to plan a march to bring attention to their demands.

Called the Prayer Pilgrimage for Freedom, it was scheduled for May 17, 1957, the third anniversary of the Brown Decision.

It drew support from a cross section of Black leaders, especially pastors, according to King Biographer David Garrow, in an article on Black Civil Rights during the Eisenhower years.
The protest, he wrote, was the most significant political initiative undertaken by national Black leaders since Randolph’s 1941 threat.

But, Garrow wrote the White House felt the Pilgrimage would become an anti-Eisenhower demonstration. Powell, who had a close relationship with the White House, was recruited to attend the planning meetings and report back to the White House.

He was even urged to try to stop it, according to Garrow. Powell could not do it, but secured assurances that the message from the speakers did not demonize Eisenhower for not advancing civil rights.

An estimated 25,000 participated in the march, a smaller number than anticipated.

Dr. King made his most prominent speech of his career and spoke of advancing voting and civil rights without directly criticizing Eisenhower.

That fall of 1957, another incident heightened tensions between Black leaders and Eisenhower: nine Black students sought to desegregate Central High in Little Rock, Arkansas.
Their effort was met with fierce resistance to the most prominent effort thus far to force compliance with the Brown Decision. Eisenhower, to enforce the court order to comply with the Brown Decision, sent troops to protect the Black students and allow them to attend classes.

In January of 1958, Garrow wrote that King was “shocked” that the President still had not agreed to a meeting.

King sought help from Congressman Powell on the issue and told the lawmaker he was becoming critical of the President’s resistance to support civil rights.

By mid-spring, perhaps through Powell’s lobbying and pressure from him and other leaders, King received word that Eisenhower had agreed to a meeting on June 23, 1958.
King received assurances that Randolph, Wilkins, and Granger would be able to join him.

According to White House records of the meeting, Attorney General William P. Rogers and Frederick E. Morrow, the first Black presidential staff aide, also attended.
Each one of the four leaders addressed concerns related to civil rights, starting with Randolph.

They included applying resources to uphold constitutional rights for Blacks; holding a White House conference to forge a dialogue between Whites and Blacks who support civil rights and complying with federal court rulings; protecting the right of Blacks registering to vote; and stopping the use of federal funds to support segregationist activities related to education, healthcare and housing.

When the President spoke, according to the memo, he was dismayed that after five years Black leaders would speak of the bitterness of the Black community and wondered if more progress would generate more bitterness.

Despite the meeting, Eisenhower continued to ignore the demands for federal help to promote the “Big Four’s” agenda.

In an interview on Nov. 6, 1960, with Zenas Sears on Atlanta radio station WAOK, King commented: “I don’t think President Eisenhower has given the leadership that this great problem demands. I am absolutely convinced that if we had had a very strong man in the White House on this issue, many of the problems and even the tensions that we face in the South at this time would not exist.”

On October 19, 1960. when King was arrested during an Atlanta sit-in. Kennedy called Coretta Scott King to express concern for his safety; Nixon did not.

Kennedy won the election with heavy Black support. During the next 10 years, that coalition, despite JFK’s initial resistance, managed to gain more ground.