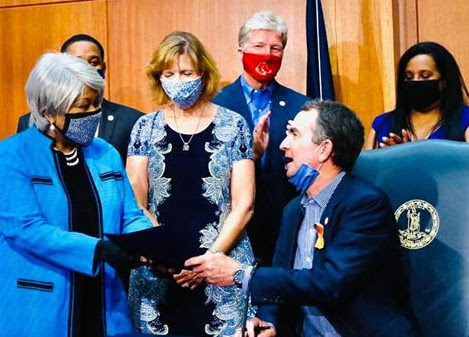 HAMPTON ROADS
State Sen. Louise Lucas (D) of Portsmouth won a major victory in the fight by Virginia Democrats to reduce gun violence with the passage of SB70 for which she was the chief patron. On July 7 Gov. Ralph Northam signed the bill that now requires that background checks be completed for any firearm sale and directs the Department of State Police to establish a process for transfers to obtain background check information from licensed firearms dealers.

Sen. Lucas said, “Now, finally, there will be consequences for a person who sells a firearm to another person without obtaining the required background check information. Simply put, SB 70 and other common sense gun legislation carried by my colleagues was not a partisan issue, but rather a public safety issue. And, these bills will help ensure that Virginia is part of the solution around preventing gun violence.”

Sen. Lucas also was the Chief Patron for SB998 which provided for development of Virginia’s clean energy infrastructure and the first offshore wind turbines built in federal waters.

“In terms of economic development and job creation, we are talking about enough clean energy to power up to 1.3 million homes, while helping to diversify the economy! Initially, this is a $259 million project that will create 529 good paying jobs and this is just the beginning,” she said after the Governor signed that bill into law on June 29.