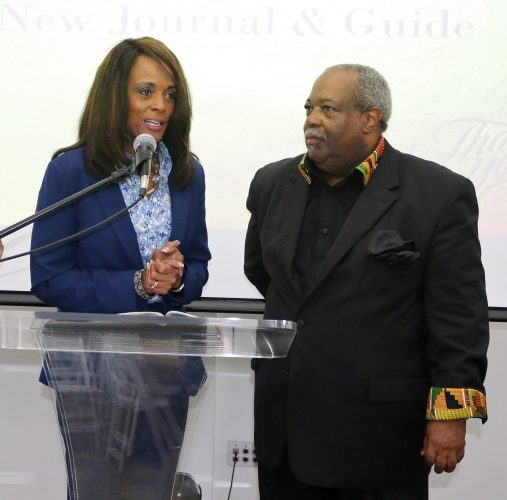 After 26 years as one of the most respected broadcast Anchors/Journalists in the region, Regina Mobley signed off the air at WVEC-TV 13 for the last time October 12.

Mobley, who was born and raised in the Titustown section of the Norfolk and is a graduate of Norfolk State University’s (NSU) Mass Communications Department, said she has shifted her career track after recently acquiring her license as a real estate salesperson the day after she left WVEC Mobley said her journey in media started in 1979 while she was enrolled at Old Dominion University.

Two years later she transferred to NSU where her first broadcast experience was behind the mic at the school’s radio station WNSB-FM.

“My most notable mentor was WTKR’s anchor and reporter Bruce Berry,” Mobley told the Guide. “I am proud to say I have mentored many talented reporters and anchors, including April Wilson, and I was mentored by Becky Livas.”

Livas was one of the first African-American women to host a live TV talk show in Hampton Roads during the early 1970s.

April Wilson is now an assistant professor at Scripps Howard School of Journalism at Hampton University.

During Mobley’s induction into the Virginia Communications Hall of Fame, as best Female Anchor, she mentioned former NSU Communications Professor Dr. Grady James, as one of the people who helped launch her long career.

James, who taught Mass Communications and did part-time on-air work at WTAR-TV and radio, said that one day while at the studio, news producer Dick Fraim “asked me to recommend a person to read news copy on the radio…..and (who) did not have a regional accent.”

“Well, I knew what he meant,” James said, chuckling. “I recommended Regina. She has come a long away from being a DJ on WNSB to WVEC. She comes back to NSU to talk and motivate students in the area. She is one of my favorite people, always the consummate professional.”

Diana Chappell-Lewis was a journalist student at NSU in the early 1990s.

“I was a sophomore and she was a Mass Communications major,” Chappell recalls. “One of the first stories I did for the Spartan Echo was on Regina.”

Chappell-Lewis recalled that “Regina, Alvetta Ewell, Nathan McCall, and I were all students at NSU at the same time.”

“I was in journalism and always an activist writer,” Chapell-Lewis said. “I wrote on the smooth-voiced Regina being hired to work as a DJ for a local White radio station (WTAR). The Echo advisor thought it was a deviation from my normal more radical stories – but I considered her position a coup d’état of sorts. Little did I know the great things she would go on to do in media – but she has always remained relatable and community-connected.”

Mobley received the Edward R. Murrow Award for her coverage of the Ashanti Billie Kidnapping- Murder case in 2017.

Mobley said she will be working with Exit Realty Central “where I will put my skills as a former journalist and overall fix-it person to work in assisting clients with their residential and commercial real estate needs.”

“For your families, I will connect them with financial professionals who will show them the road to finance a home,” she said.

“Homeownership is one of the most effective ways to develop wealth and it establishes a stake in the community.”

Follow us
In this article:News Anchor, Real Estate, Retire