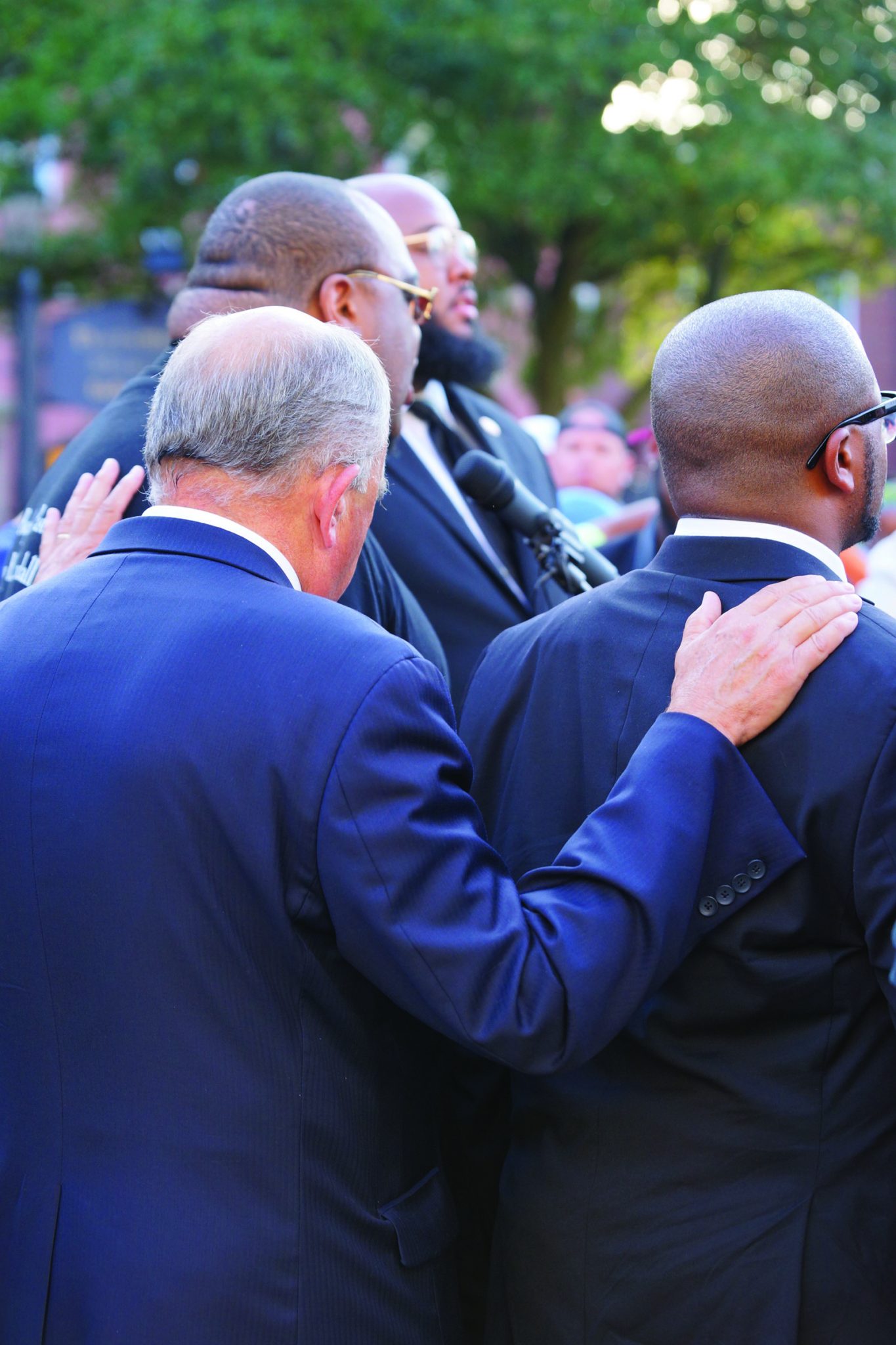 The “Disrupt Confederate Monuments” protest march held in Norfolk on Wednesday was organized by the group Disrupt Norfolk VA and it attracted 200 demonstrators.

Alexander said that people from Norfolk fought to save the Union, including Sgt. William Carney, who was the first Black recipient of the Medal of Honor. A statute of Carney is in West Point Cemetery which is next to Elmwood. Alexander said he would bring the issue to city council for a decision.

The following day, Portsmouth, Mayor John Rowe called a press conference, hours before a planned “Remove the Stain” protest rally in his city. Mayor Rowe announced that he and three others on city council (Mark Whitaker, Lisa Lucas-Burke, Vice-mayor Paige Cherry) would support having the Confederate monument, located on Court and High Streets, relocated to Cedar Grove Cemetery. The cost of relocating the monument and the repair of the street is estimated at $100,000. Councilman Mark Whitaker, who earlier in the week wrote a letter to council calling for the monument’s removal, has offered to donate his council salary of $23,000 to help offset the bill.

At the rally, Mayor John Rowe, surrounded by Portsmouth church leaders, said that he wanted to bring the city together. Portsmouth NAACP Branch President James Boyd told the Guide, “It’s been a long time coming. We got a victory today.”

The Guide interviewed Mayor Rowe after the rally, who said, “This is from my heart, this decision. And it is the right thing for this community to do. And it moves the monument to a place that is proper. It’s time to stop the hurt in our nation and in our city, and come together as one people.”

Former Mayor Kenny Wright told the Guide, “It is always time to do what is right. And I’m glad we are doing what is right here in Portsmouth. We need to do it all over the country.” Opponents of the monument being moved to Cedar Grove Cemetery pointed to Section 15.2-1812 of the Virginia State Code (Monuments Law) which makes it a misdemeanor to “disturb or interfere with any monuments or memorials. Two years ago, a Confederate heritage group threatened to file a lawsuit against the city of Portsmouth.

Supporters of the monuments’ removals say that both Portsmouth and Norfolk would prevail in court because both statues are located in the middle of public roads. This would allow both cities to use the claim of “eminent domain,” which is nearly impossible to defeat in court.

Eminent domain is the law which allows cities and states to seize private property and repurpose it for public use. The cities think they are acting within the law because they are relocating the monuments to other public spaces, such as city owned cemeteries.

A protester at the Portsmouth rally told the Guide, “Black folks don’t care if white supremacists, the KKK, or Neo-Nazis want to hold a rally in a cemetery.”