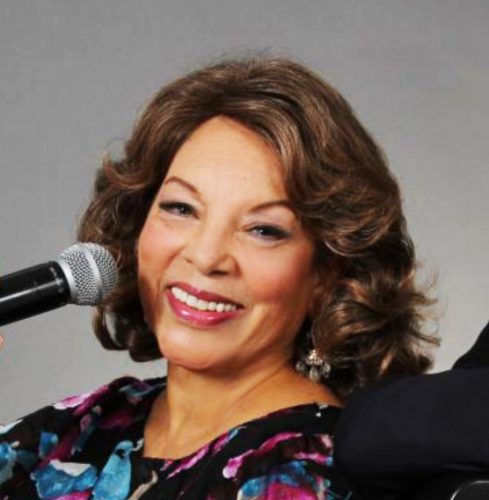 Today, Becky Livas is the vocal half of the Cabaret-Jazz Duo with pianist Keith Nesbit at various venues around Hampton Roads. Since last fall, she’s had occasional gigs at Varia Restaurant and Wine Bar at the Hilton Main in downtown Norfolk.

For two and half decades, Livas has perfected the Cabaret-Jazz vocal style and can sweeten a room, large or small, with selections from Tin Pan Alley to contemporary composers.

But she also has been a world geography teacher and most recently, a newly minted and “proud” docent at the Chrysler Museum.

Livas was the first Black female TV reporter on WTAR-TV (now WTKR Ch. 3) in 1972. Before she wrote her name in the history books, she was a “housewife” in a middle class marriage to Henry Livas, a Black Civil Engineer.

In that role, she said she volunteered on the YWCA Tidewater Board, joined the Links, Inc, volunteered with her Alpha Kappa Alpha sorority, led the then mostly White Lake Edwards West Civic League in Virginia Beach and raised two children. (Her third came along while she was a reporter for WTAR.)

“My husband was not too happy with the time I spent in civic affairs,” Livas recalled. “He said ‘if you’re going to spend my money on gas driving to meetings, you might as well be working.”

Livas was born Ellen Rebecca Perry in Philadelphia but spent most of her life in Hampton Roads. She was the daughter of educator turned politician John Perry, the first African-American elected to the Virginia Beach City Council.

The “Outstanding Young Woman in America” earned a degree in History and English at Hampton Institute (now University) where she was a DJ on the school’s radio station, WHOV-FM.

Bitten by the journalism bug on a 7th grade field trip to the Virginian Pilot, she later spent a college summer working as an intern-editor at the U.S. Labor Department publication.

single child in a family of educated and socially active parents, her mother, Ellen Perry, was strict on her language usage, teaching Becky to speak so no one could tell her ethnicity or region.

Growing up, she watched national news on WTAR (then an NBC affiliate) and years later was “appalled” by accents of some local White broadcasters. “I would stand in front of the TV and scream … and tell myself I could do much better.”

Livas said she was inspired by seeing Michelle Clarke on the CBS This Morning and Eric Rogers and Betty Ann Bowser on WTAR. “I knew it was (my) time,” she said.

“In October 1971 when I chaired a drug seminar for AAUW at Virginia Wesleyan, a Black WTAR cinematographer, Al Hill, suggested I’d be a good candidate for a newsperson.”

Days later, she did an audition tape.

“April 1972, a neighbor child drowned in an unattended swimming pool and I called to suggest WTAR do a pool safety feature. Tom Roland, who would later become a mentor, answered the phone. ‘We were just talking about you’, he said.”

“I was sent to New York to interview for an internship at the Columbia School of Journalism’s program for aspiring minority journalists,” she recalled. “I wore this middle class business dress I’d made and I was interviewed by two guys wearing jeans who asked me about police brutality and if I was a ‘cosmo(politan)’ girl. I was rejected.”

Back in Norfolk, Tom Roland and News Director Jim Mays devised a 13-week plan to train Livas. In August of 1972, she made history.

“I was hired because the time was right,” Livas said. “I just happened to be the right person for the job, though I’m not certain their motive was to get a ‘keeper’ since at that time, hiring Blacks was often window dressing.”

A pioneer entering a field few Blacks worked in, she encountered “a few racist, sexist men who tried to make me miserable.”

“Many others had progressive racial views,” she said. “Jim Mays was the kind of guy who looked at what you did, not your color or gender,” she recalled. “Sometimes today I hear his voice helping me to edit something.”

Lives said the newsroom was at times “a men’s locker room.” Betty Ann Bowser, who co-anchored the 11 o’clock news with Ed Hughes, was the only other woman.

From 1972 to 1975, as a field reporter, she experienced covering stories that might not get on the air. In 1972, when Shirley Chisholm, the first Black woman to seek the Democratic Party nomination for President, was slated to appear at ODU, Livas asked to cover the event.

“I was told outright in front of everyone that she wasn‘t worth covering,” Livas recalled. Ironically, a guy she thought was racist, spoke up to say the station would be making a mistake not to cover her.

“I did the assignment,” she said.

In 1975 Livas became producer and host of the 1 p.m. weekday “magazine” show “People, Places and Things” where she not only did on-set interviews but in-the-field features. She travelled for fashion coverage in NYC and interviewed national stars appearing at the Tidewater Dinner Theater at the Lake Wright Hotel. But she recalled “one of the most insulting things ever said to me when I got my own show … “Now, remember, this is not Soul Train.“

Her Director Andy Roberts introduced her to Rosemary Clooney, who influenced her singing career. In 1978, Livas was paired with Roberts to co -host “Three in the Morning,” at 10 a.m., another daily. “I prepared by reading, and was a good listener, letting interviewees take the lead. Billy Dee Williams, who had a role in the first Star War Sequel “The Empire Strikes Back,” was pleased when asked about his painting which he said other reporters missed.”

In 1980, she left WTAR, moving to Las Vegas with her second husband, bassist Bart Broadnax from Chesapeake. As a band wife, she was in great musical company although not fully pursuing singing yet.

Returning to Hampton Roads, Livas landed a gig as producer/host of the overnight Jazz Excursions, which she created at 89.5 WHRO (later WHRV) from 1987 to the early 1990s. Her singing career began in earnest in 1992 with fellow WHRO/WHRV broadcaster Lynn Summerall and his 1920’s style Hotel Paradise Roof Garden Orchestra.

Livas has taken her life and work in stride.

“On my second CD with Pamela Hines, I do a Jerry Herman song called ‘Time Heals Everything’ … it almost does,” she said.

“If you live long enough and iron out the kinks in your thinking and actions, time becomes a friend … Dare to trust God.”