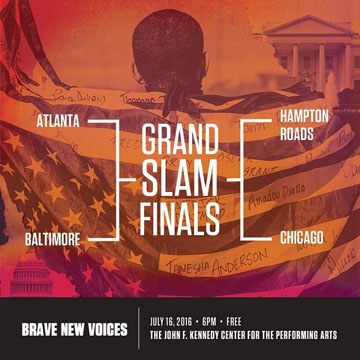 NORFOLK
For the eighth consecutive year, Hampton Roads youth shared their stories with an international community of spoken word artists. This year, about 600 young poets from around the country and various places around the globe gathered in our nation’s capital for five days of poetry, bonding, community service and the world’s largest youth poetry slam competition at the 19th annual Brave New Voices Festival, which was “aimed at redefining what it means to be an American in the 21st Century.”

The opening ceremony of the festival included a #ItooAmAmerica contest, which was inspired by the final line of the Langston Hughes poem “I, Too.” The contest gave youth poets the opportunity to write to modern day issues that Americans, especially young people, face such as public education, the criminal justice system; climate change, poverty and economic opportunity.

Hampton Roads Youth Poet Laureate Dayana Lee was one of the finalists who shared the stage during opening ceremony at the Kennedy Center for Performing Arts. This was not the only honor bestowed upon Hampton Roads Youth Poets during Brave New Voices. This year’s Hampton Roads Youth Poets team, made up of eight youth from throughout Hampton Roads (Dayana Lee of Virginia Beach, Nia Naomi Johnson of Suffolk, Khosi McClain of Newport News, Malik Jordon, Donovan Pollock, Norfolk, and Devon Carter also of Norfolk, plus Jasmine Reed of Portsmouth and Niles Doswell of Chesapeake) competed against previous year’s Brave New Voices Grand Slam winning teams from Philadelphia, Denver and the Bay Area, as well and eight other teams from around the world, and moved on to the semifinals! At semifinals the top 20 teams out of all 60 teams competing were narrowed down to four finalists. The Hampton Roads team earned the honor of being one of the four finalists and competed against teams from Chicago, Baltimore and Atlanta at the Grand Slam Finals. Hampton Roads placed second with only a 0.5 point difference between them and the winning team from Baltimore.

But the prize for winning the slam was not a trophy, medal or money nor anything tangible but rather it was the opportunity to be heard. Hampton Roads youth spoke, boldly, confidently, artistically to issues close to their hearts and the hearts of many young people in our region and beyond. They had the opportunity to be the voice of Hampton Roads and heard by millions around the globe via Kennedy Center Livestream and Brave New Voices’ expansive social media network.

This demonstration of free speech, artistic empowerment, and youth voice fosters a community of dialogue, where young people gather, commune together, speak to and with each other, learn about and from one another and challenge systems, organizations and one another to do better and be better because the world is counting on them, and this generation can and does, speak for itself. https://youtu.be/wSQV579WIc4

Deirdre A. Love is the Founder/Executive Director of Teens With a Purpose – The Youth Movement. For more information, call (757) 747-2679 or visit http://www.twpthemovement.org