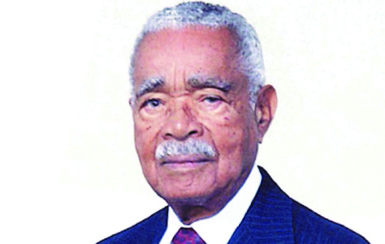 Garth C. Reeves, Sr., The Miami Times’ retired publisher who became the enduring patriarch of a family newspaper dynasty after decades of fighting the political establishment and while guiding the Black community through the city’s racial problems, died on Monday, November 25. He was 100.

Regarded as a titan in the Black Press, Reeves was widely respected in Miami for using his power and influence to advance the agenda of the city’s Black community. After experiencing the pain and humiliation of segregation in parks, schools and the U.S. military, Reeves grew into an uncompromising crusader who smashed racial barriers in some of the most prominent organizations in Miami and the nation.

During his lifetime, Reeves’ newspaper got a police chief fired, ended the career of a a Miami Mayoral, supported a boycott that cost Miami Beach’s tourism industry millions, and unapologetically called riots “protests” or rebellions. He stared down Miami’s political establishment that for decades had been accused of shutting out Blacks in government as Hispanics rose to power in the city’s political and business establishments.

This was the city’s historic Black, once-thriving neighborhood near downtown. Harry Ethelbert Sigismund Reeves in 1920 founded the Miami Sun, which closed because of a paper shortage during World War I.

In 1923, Harry Reeves started The Miami Times at NW 8th Street and 3rd Avenue. It would move four times in the Overtown neighborhood. When Interstate-95 was built through Overtown, it displaced thousands of Blacks. Many fled north to the Liberty City community, where The Miami Times sits at its present location, 900 NW 54 Street.

In 1940, Reeves graduated from Florida A&M University. In 1942, Reeves was drafted to serve in the Army during World War II. During an interview in 1999, Reeves recalled a trip on a train to the Pacific coast to go overseas. Despite repeated requests, a white train conductor refused to give Reeves something to eat in spite of him having meal coupons. Reeves went to the military police, who told him to do what the white conductor said, or face being locked up on the train. Reeves was forced to pay for his meal because he could not go into the segregated dining car.

Experiences like those would fuel Reeves’ passion for Black journalism’s role in exposing racial injustices while advocating for the needs of disenfranchised people of color.

After completing his service in 1946, Reeves returned to The Miami Times.

Reeves joined Reverend Theodore Gibson, the president of the local NAACP Chapter and began leading protests for better conditions for Blacks in Miami. On November 7, 1957, Reeves led a group of seven Black leaders to Crandon Park, a segregated white beach near Miami. Reeves and the men earlier talked to several county commissioners, saying that as taxpayers they had the right to frequent Crandon Park or any segregated beach. Wearing their bathing suits under their clothes, Reeves and the men took off their slacks and went into the water while several police officers watched. Blacks began frequenting other white beaches after the incident.

Reeves, as the publisher of The Miami Times, was just as fierce. It was the only job Reeves would have throughout his life. He worked his way up the ranks as columnist, reporter, managing editor, and editor. When Reeves’ father died in 1970, Reeves became publisher.

During the 1960s The Miami Times ran a front-page story advocating for the termination of Miami Police Chief Walter Headly, whose Stop and Frisk policy of searching Blacks lit up racial tensions in the city. Headly was eventually fired and the Times readership grew.

When four Miami police officers were acquitted in May, 1980 of killing Arthur McDuffie, a Black salesman, Blacks took to the streets. White newspapers and local television stations described it as a riot. With Reeves at the helm, The Miami Times called the incident a “protest.” When another Miami police officer was acquitted in 1993 for killing two Black motorists in Overtown, The Miami Times called the civil unrest a rebellion.

There were other highlights under Reeves’ leadership at The Miami Times.

In 1993, Reeves and The Miami Times published editorials and stories supporting a boycott of Miami Beach hotels that cost the tourism industry millions of dollars.

The National Bar Association and ACLU were among many organizations that did not bring their conventions to Miami Beach in support of the boycott.

The boycott lasted three years and cost the tourism industry between $20 to $50 million.

Reeves was the first Black to serve on the boards of the Miami-Dade College, Barry University, the Greater Miami Chamber of Commerce, and the United Way of Dade County. He also served as organizing chairman of the board for National Industrial Bank, which was the first integrated bank in the State of Florida.

While serving on many of these boards, Reeves pushed them to hire more Blacks when they were reluctant to do so. As a board member of Miami-Dade College, Reeves threatened to lead a vote to stop doing business with the school’s law firm because it resisted his calls to hire Black attorneys in its offices.

Today, The Miami Times is the largest Black newspaper in the Southeast. For the past two years it has been named Best Black Newspaper by the National Newspaper Publishers Association (NNPA), which represents over 200 Black newspapers across the country. In 2011, NNPA named Reeves Publisher of the Year. In 2017, Reeves was inducted into the National Association of Black Journalists Hall of Fame.

In 2017, Miami recognized Reeves with an honorary street sign.

He retired in 1994 and assumed the role of publisher emeritus but Reeves remained active as a prominent leader in the Black community.

This article originally appeared in The Chicago Crusader.

Follow us
In this article:Garth C. Reeves, Miami Sun