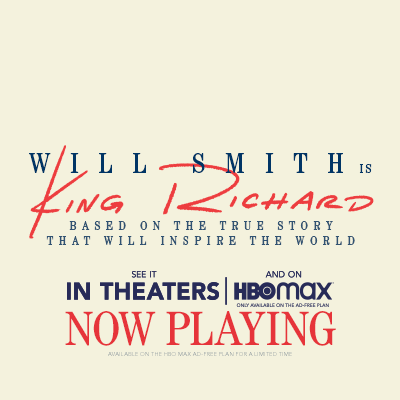 Black supportive visionary fathers like Richard Williams rarely grace Hollywood billboards or appear in the Smithsonian; but the tradition may change thanks to a new movie, an HBO Max livestream, and a new Smithsonian exhibit on Serena, Venus, and their dad, Richard.

But don’t expect the tradition to change overnight since fans didn’t necessarily flock to the theatre premiere run of the Warner-produced film, “King Richard.” It opened near Thanksgiving and stars Will Smith. The movie cost $50 million in production costs but earned only $5.7 million at 3,302 venues in North America during its debut week, according to Variety. While Warner projects the film could earn closer to $10 million in the coming weeks, it is competing against holiday heavy hitters like “Ghostbusters: Afterlife,” which earned $44 million at the pre-Thanksgiving box office.

The new movie, “King Richard” is about a father of color in Compton who acted on a vision. His hope changes reality as he draws up an 85-page plan and starts giving tennis lessons to his daughters, Serena and Venus, who are about age 4.

He works as a security guard, his five girls share one bedroom, he and his wife disagree on discipline, while he teaches two of his daughters how to play tennis on decrepit, beer-bottle-strewn courts in Compton. He briefly enrolled them in a tennis academy but pulled them out in 1995 so he could coach them. In the early 1990s, the family moved to Florida so that Venus and Serena could attend Rick Macci’s prestigious tennis academy.

Through it all, Richard Williams offers his family hope.

A quick side note, the trailblazing tennis stars’ father was part of The Great Migration. This means he was one of the millions of ambitious and visionary African Americans who fled the South from 1916-1970. Fleeing Louisiana, where he and his four siblings grew up without a father in a three-room shack with their mother, on East 79th Street, next to the railroad tracks in Shreveport, he grew up eating bullfrogs, fish, rabbits, and stolen chickens before he migrated to Chicago, Richard Williams said in his 2014 autobiography, “Black and White: The Way I See It.”

The movie takes you by the hand, guides you through Compton’s mean streets, and the complex mind of Richard Williams, who married three times. He said in his autobiography, “My father never gave anything to me, I decided I was going to give my family everything I had.”

That is why he drove his two daughters to and from from practice in a red and white Volkswagen van. Why he bought a gun to deter gang members. Why he was sometimes criticized and other times applauded for his odd behavior. In the early 1990s, the family moved to Florida so that Venus and Serena could attend Rick Macci’s prestigious tennis academy.

“The world may now see me as a famous man in control of his destiny, but no one knows how much my early life defined me as a child, and later, as a husband and a father. As early as I remember, I hated my name because my father’s love did not come with it. It would always remind me of the man who left me alone, who abused my mother, and who put me way behind the starting line in the race of life.”

This new movie about a father of color faces other obstacles that may vanish during the holidays, if more people visit the Williams’ sisters new exhibit at the Smithsonian’s National Museum of African American History and Culture.

During the holidays, you can visit The “Serena and Venus” exhibit. It includes 14 black and white photos that show the two trailblazing tennis stars as youngsters posing, training, or goofing around with their dad after practice ends.

Although the new movie is experiencing an uphill climb, the latest struggle will not change history, since their father’s visionary mindset transformed history decades ago.

The new movie is “a modern-day version of “A Raisin in the Sun,” with Richard assuming the role of Walter Lee Younger,” LZ Granderson wrote in a recent editorial in The Chicago Tribune. “Other moments he takes the proverbial mic from Grandmaster Flash and the Furious Five to deliver a message of his own.”