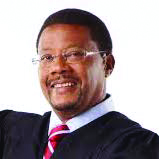 BEL-AIR, CA
Greg Mathis, who is now presiding over the 20th season of the Daytime Emmy Award winning series “Judge Mathis,” recently bought a $4 million home in Bel-Air.
Shortly after selling his Tarzana home for $3.1 million, Mathis, 58, closed escrow on a modern residence in Bel-Air for $4 million, real estate records show. The former Michigan District Court judge acquired his guard-gated property in Tarzana in late 2011 for a bit more than $1.9 million.
His new Bel-Air home has wide-plank oak floors, and the center-island kitchen is a sleek mix of stainless steel and Italian stone.
There’s also a dining area, a gym and an indoor-outdoor living area that opens to a patio with a pool and spa. Upstairs, picture windows display reservoir views from the loft.
Four bedrooms and four bathrooms, including a master suite with a fireplace and dual closets, finish out the interior.
Mathis, 58, worked as a judge in Michigan’s 36th District Court before “Judge Mathis” first aired in 1999. Second only to “Judge Judy” as the longest-running TV judge, he began his 20th season in September.

Follow us
In this article:Greg Mathis, Judge Mathis, New Home