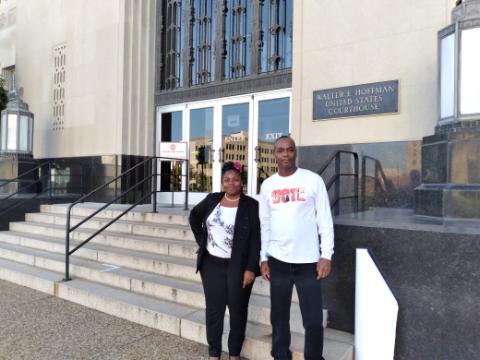 A trial to hear the merits of a suit demanding changes in the system Virginia Beach uses to elect city council members began October 6 in the U.S. Federal District Court in Norfolk.

The suit, Latasha Holloway/Georgia Allen vs. Virginia Beach claims the city’s system of electing 10 council members deters Blacks from electing council members of their choice by diluting their vote.

The October 6 trial will be heard without a jury. Judge Raymond Jackson will be hearing the case. He is the first African American to sit on the Norfolk Federal District Court bench.

Such a system, according to the suit filed over a year ago, violates Section 2 of the Voting Rights Act of 1965.

This provision prohibits voting practices or procedures that discriminate based on race, color, or membership in one of the language minority groups identified in Section 4(f)(2) of the Act.

Most of the cases arising under Section 2 since its enactment involved challenges to at-large election schemes, but the section’s prohibition against discrimination in voting applies nationwide to any voting

standard, practice, or procedure that results in the denial or abridgment of the right of any citizen to vote on account of race, color, or membership in a language minority group.

In 1992, after years of challenging the at-large system in Norfolk using the same claim, federal courts agreed with a suit filed by the Norfolk NAACP. Norfolk now elects seven council members using a ward system. The mayor is elected at-large.

Virginia Beach’s system of electing 10 council members is a hybrid. Candidates are elected from single-member districts or at-large seats.

Holloway/Allen vs. the City of Virginia Beach describes a system where the vote for a candidate in a single-member district can be nullified by votes from residents living outside it.

So if an African American candidate who attracts enough Black and white voters to win an election, white voters from outside the district may cast their vote for a white candidate of their choice.

Holloway/Allen vs. the City of Virginia Beach, asked the court to consider, among other things, an election system with 10 single-member districts, meaning that only the voters residing in each district would elect the council member from that district, plus the mayor who would be elected at large. These districts will be devised by

grouping the necessary number of Black and white voters into a specific ward.

Only one of them, Centerville is represented by an African American: Sabrina Wooten.

There are three council members elected at-large. Only one of them is African American: Aaron Rouse.

This is the first time in the city’s history that two African Americans have served on the council at one time; both were elected in 2018.

Council members and residents who support the current system point to this historic point as a means to retain the current situation.

But Roy Perry-bey who is spearheading the legal battle to change the city’s system that “although Blacks were elected none of them ever were reelected. This is due to the current system.”

Before Wooten and Rouse were elected on the council, three other Blacks have served.

This year, Wooten who is running in the Centerville District in a rematch against another African American, Eric V. Wary II.

The federal courts rejected a motion by the city to dismiss the plaintiffs’ case, thus forcing the city to help compose and a sign a settlement which the council recently rejected.

The council took the vote to reject the settlement in a closed session, so it is unknown who was actually against or for the measure.

“This just shows that the city cannot be trusted,” said Holloway, a mother of four who is native of the Beach. “This is why we are so glad that we are proceeding with this case to let the courts see how the city has diluted the ability of Black people to apply their vote.”

“It is the largest city in Virginia and Virginia Beach has a history of denying rights to African Americans,” she said. “Not only in voting, but in housing, education, and criminal justice. But they claim to be a fair city.”

The city is are convinced the current system, is fair just Councilperson John Moss in an article in the GUIDE noted his support for changes in the way Virginia Beach elects its council.

In a recent Facebook posting, Moss mentioned the trial and the recent council vote which dismisses the compromise.

Expecting federal trial to go on for several weeks Moss said if the federal judge should rule against the city, it will be appealed.

He also noted that the council’s vote may have killed an option to give the citizens a chance to vote on a resolution to determine if the current system should be changed.