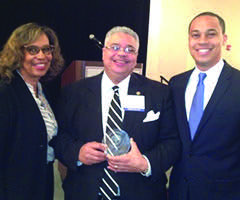 Jones arrived on campus and became a member of The Magnificent Seven, a nickname adopted by the seven young men of color who integrated VES in the late 60s. The seven were admitted to the elite boarding high school in Lynchburg as “part of a quiet but strategic experiment, funded by a private organization called the Stouffer Foundation,” according to The New York Times Magazine. The privately financed project also placed young African-American males in elite boarding schools in Boca Raton, Fla., Asheville, and Atlanta.

The muted experiment had several goals. In addition to launching a shift in elite high school education in the South, the effort also aimed to instill in Southern white elites “a visceral and compelling (but then largely non-existent) belief in the societal benefits of integration.” Moreover, the project aimed to test how much a child of color could achieve in a white environment.

Rethink your assumptions, in other words. Pause a moment. Travel back in time. Try to imagine how things were when Jones and the others hauled their suitcases into their dorm rooms in Lynchburg in the late 1960s. “Gov. George Wallace of Alabama was running for president, and Confederate battle flags were on display,” The New York Times Magazine noted.

For example, Bernard and Alexander were already the top two students in their class and remained so during their entire four years at VES. “They became the head counselors in the dorm. They were on the football team, which won a state prep-school championship, the first integrated team to do so, a year before the public-school team made famous by “Remember the Titans.”

This is the point. Did the quiet experiment succeed? Well, one of the first students of color Marvin Bernard delivered the valedictorian address at graduation in 1971. Oh yes, Bernard became the valedictorian because his grade point average was slightly higher than Bill Alexander’s grade point average: “They finished first and second,” The New York Times Magazine noted. (Both are now 64 and physicians).

“Those white boys knew,” Marvin Bernard said of his challenging but heady years at VES.

Did the muted experiment succeed? Jones, a 1976 graduate of Princeton University, earned his law degree in 1980 at Washington Lee University. He served as the first African-American law clerk of the Supreme Court. He returned to Norfolk, served as an assistant commonwealth’s attorney, and stayed in private practice until 2002.

Jones was appointed to the Norfolk Juvenile and Domestic Relations Court in 2005 by Gov. Timothy M. Kaine. The governor appointed him to the circuit court in 2008 and the General Assembly elected him to a full eight-year term in 2009. Jones was also elected to the Virginia House of Delegates from the 89th District (1988-2002) and was re-elected eight times.

About 50 years after the first two students of color enrolled in VES, five of the Magnificent Seven returned to campus to celebrate the 100th anniversary of VES in October 2016. Conditions had changed.

“They looked like grown-up versions of their younger selves,” The New York Times Magazine noted. The current headmaster, G. Thomas Battle Jr. gave the opening address in the school’s new theatre. Battle saluted their achievements, asked five of the Magnificent Seven to stand with other returning scholars, and asked them to accept a round of applause.

Now this is where the seemingly deep question that the Stouffer Foundation members had mulled over decades earlier comes in. Some of their classmates “had come to realize how much the seven had sacrificed,” The New York Times Magazine noted. “The feeling was acute in the company of their white classmates, who with age also realized what the Stouffer scholars went through; some were moved to tears.” Later at a cocktail reception, a former classmate reflected on their faded past. He said, “They had more pressure on them to toe the line and be successful. We were all kind of stupid sometimes.”

Mosh Secret, who wrote the magazine article, said he interviewed dozens of Stouffer scholars before focusing the story on the Magnificent Seven. While all of the students of color were chosen for being resilient, in a sense the Magnificent Seven were already young powerhouses.

The writer of the piece, Secret added, “The Magnificent Seven hadn’t heard of the study until I told them about finding the dot matrix printouts in the University of North Carolina’s archives. I asked them whether they cared that their educations – and the personal costs some of them paid – had been an afterthought in this larger experiment in conditioning white southerners to tolerate Black children from a young age. ‘No, I never felt that way,’ Bill told me. I think I benefited from the VES educational experience. Did we contribute to changing the culture of the school? Sure.”

Then the experiment ended. In the summer of 1976, the Stouffer Foundation cut off monetary support for the program and terminated the foundation. Blacks by then were welcome at 20 prep schools nationwide.

To answer the seemingly deep question that Stouffer Foundation members mulled over years earlier, try to take it all in. Or look at it this way. In those days, a handful of people made a difference. This means a few people flipped racial animosity on its head. Try to remember racial acrimony was largely instinctive, like inhaling a breath of air, in the late 1960s when the Stouffer Foundation changed history by simply spinning a wildly unpopular notion on its head: What would society look like if young wealthy white students were exposed to students of color?

Launched by Anne Forsyth, an heiress of the North Carolina Cannon and Reynold’s families, who traveled in Winston-Salem’s emerging white liberal circles in the 1960s, the Stouffer Foundation was named after her mother. Foundation members chewed on several wildly unpopular notions: “Would the South change if its future leaders were socialized to be less bigoted?” Here is another question they chewed on: Could whites help other whites lose their prejudices?

The experiment ended in 1976. Summing up the secret experiment’s impact, John Ehle, a North Carolina novelist who had headed the program, worked as a recruiter, and kept a file for nearly all of the 140 Stouffer scholars, which eventually included girls, Native Americans, and Latinos, said, It was “the quietest, most successful integration program carried on in our country.”