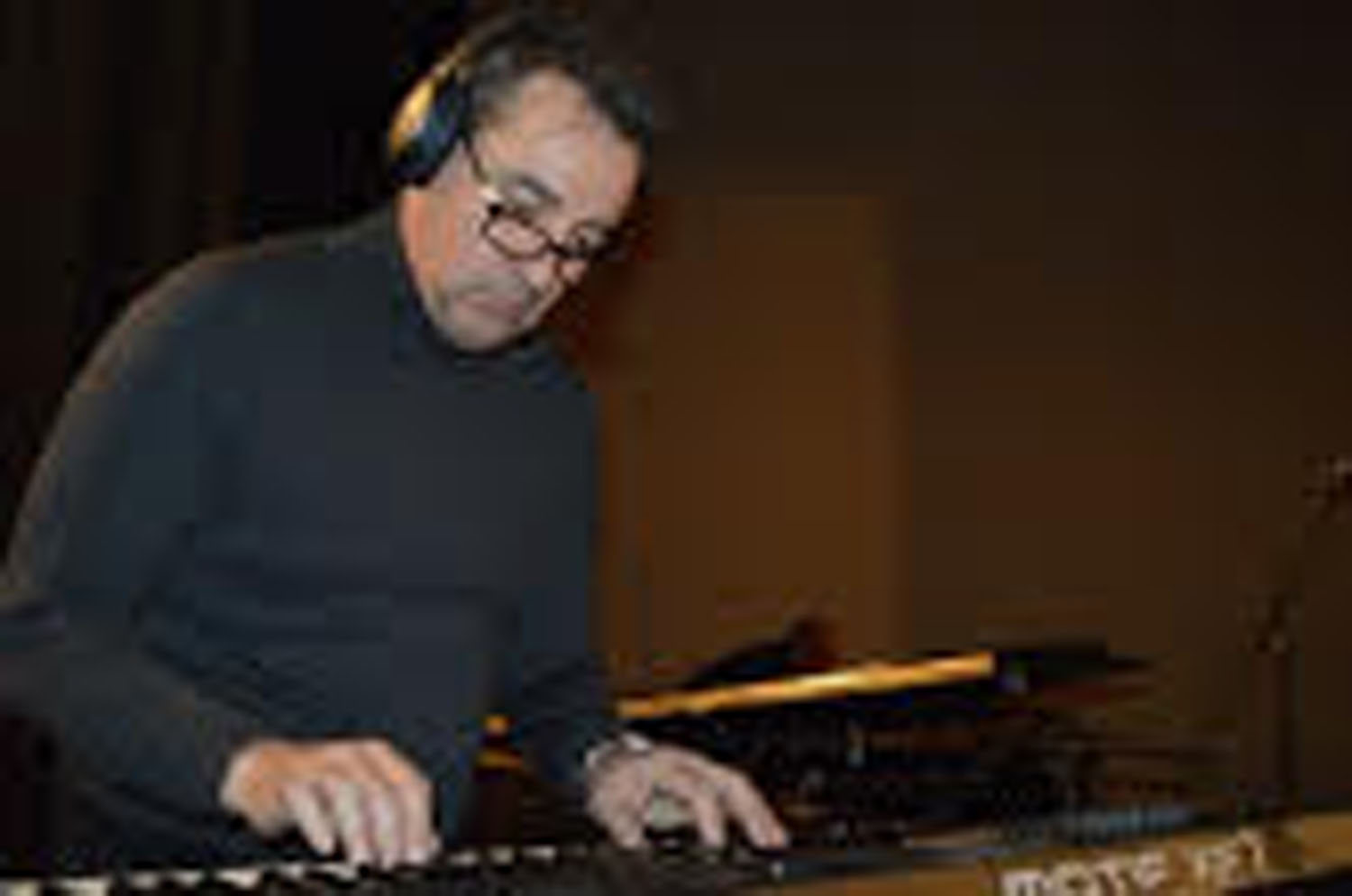 By Glen Mason and Ray White

The music of Alex Bugnon is an inherent amalgamation of jazz and rhythm and blues. As evident in his appearance at the Attucks Theatre last Friday night as part of its Church Street Jazz Series that’s growing in popularity, Bugnon brought the house down with his signature sound. A sound he has been crafting since his halcyon days.

Sound check proved to the best place to interview Bugnon. His earlier interview session with Cool Classic Artist Today syndicated radio show was pushed back due to a flight delay. With two interview sessions combined to save time, it proved to be like a private jam session. Rehearsing with calm and ease, Alex and his sidemen wanted to make sure their concert was an event.

One arrangement that would surely bring the house down during the ensuing concert was an improvisational segue that paid homage to Count Basie’s “It Don’t Mean A Thing (If It Ain’t Got That Swing).” Whoa! He wanted to make sure that sounded right. It had swing but Bugnon and the quartet ingeniously put some funk to it. Later, the house would howl.

Funk added a veneer to his creative aesthetic.
Educated in the finest music schools in Europe, Bugnon said his development was supported by exposure to the finest music halls as well as the jazz from his dad and uncle was always around him at home.

“I went to many music schools: the Paris Conservatory, the Mozart Academy in Salzburg, Austria. I went to the local music school in Montreux,” Bugnon explained. “After that I went to the Berklee College of Music in Massachusetts.”
What Bugnon wanted to do career-wise was play music and let the music take center stage.

“My dad was a jazz musician, and I was raised in jazz by my uncle Donald Byrd. Jazz was always around me,” said Bugnon, as he prepared for his performance.
Yes. That Byrd.

Bugnon said his artistic cathartic moment manifested itself when he heard the progressive sound and funky grooves of Earth, Wind & Fire, Carlos Santana and the Ohio Players … as it leaped across the Atlantic Ocean.
“Now, when I heard those groups that was when I knew what I wanted to do,” he exclaimed with heartfelt enthusiasm.
Bugnon’s performance and personality turned concert into an event.

The Attucks Theatre was the perfect venue for his quartet to perform. Bugnon prefers intimate settings instead of the huge, at times imposing concert arenas. Preferring to play keyboards or piano up close and personal, Alex appears to feed off the energy of jazz lovers.

The house acoustics were perfect for the quartet that featured Vincent Harvey, who exhibited his virtuoso on sax, guitar harmonica and vocals; David Dyson, prolific bass guitarist of Pieces of A Dream fame and Abe Fogle, with his energetic, kinetic percussions.
“We have Alex Bugnon all to ourselves, tonight,” bragged host Jay Lang.

From his opening number Bugnon was true to form. The first arrangement, with his formulaic improvised intro, set the tone for the jazz ensemble’s performance.

By the third number “A House Is Not A Home,” Bugnon started tickling the keys with a technique during an improvisation that made the audience cheer with approval. When he went into a tribute to Michael Jackson with a smooth, jazzy rendition of Rod Temperton’s “Thriller,” he elevated it to a whole new level, if you can imagine it being elevated to a whole new level. That number had jazz mavens shouting “Alex’s” name like they knew him like they know his jazz.

Bugnon and his compositions were in-synch right from one from the start.
Masterfully, he started grooving on the ivories just enough to allow an anxious audience to get comfortable. Having watched him at other engagements around the country it was noticeable that Bugnon has an uncanny knack of making his audiences feel as if he has invited them over to his house for tea, a glass of wine.

Bugnon took the audience on a world tour with “The World is A Ghetto,” filling it with riffs full of emotion and passion. As if it was dramatically designed, a subtle nod on a downbeat queued multi-instrumentalist Harvey.
Harvey impressed by exchanging and playing saxophone to harmonica to flute to lead guitar riffs without losing a beat like some musical chameleon.

Noticeably, Bugnon just got lost in his improvisation and they all followed him blindly. One on Alex’s standards took everyone to the ghettos of Warsaw, Detroit (reference a recent episode of CNN’s “Anthony Bourdain’s Parts Unknown”), Baltimore and Chicago before a rare intermission for a solo performance.

Saying he wasn’t used to intermissions during performances, Bugnon humorously remarked to his new found friends he wanted to play one more piece before they would take five (no pun intended), “if you don’t know this you’re helpless.” The song was “A House Is Not A Home.” The rendition garnered a profound round of enthusiastic applauses.
With affable, inherent coolness Bugnon introduced his next set by upping the tempo that said jazz Norfolk we’re here.

What he did to his fans during that set filled the house with that THING of jazz. Creative freedom turned sound.
That was on also exhibit when Harvey’s solos seamlessly moved from harmonica to flute and ended with him on saxophone. With the stylistic syncopation of the youthful looking Dyson’s bass guitar solo setting him up and the backbeat encouragement of drummer Fogle, Bugnon just got right down right to it judging from the audience appreciative response. The ensuing applause took them all to intermission with one of the Attucks’ faithful shouting, “I already GOT my money’s worth!”

Jay Lang opened the second set succinctly, “Long before Kenny G, long before Najee, long before Rick Elliot…Alex was kicking it!”
The fun started with the aggregation’s interpretation of the Gap Band’s ”Yearning For Your Love.” With Bugnon’s beckoning the Attucks audience to join in by singing the chorus, “Myyyyyy heart, keeps yearning for your love … keep running.” You get the riff. When it came to the bass solos Dyson showed he is now THE bass sideman. His thundering, thumping funk based cacophony of licks were demonstrative with a tad more technique than Bootsy Collins and slightly smoother than Stanley Clarke.

Together the aggregation filled the concert hall with a grooving syncopation of rhythm compositions that coated the contemporary elements of straight ahead jazz with a veneer of rhythm and blues. It’s fluidity exemplifying the next progression of fusion, as it were. Maestro Bugnon led surreal, subtle, emotional movements that were pure, transformative for lack of a better expression.

As Bugnon started to close the set, only to be called back for an encore, he led a tribute to George Duke. He told the audience that he was going to sit in with some of Duke’s former band members and record a song “styled” after George Duke. He said he would release the new compact disc in April or May.
“In a week and a half I’m flying to Los Angeles to record a song in the vain, in the style of George Duke,” as he had told Cool C.A.T. and the Guide earlier.

“It will be my tribute to George Duke. I didn’t want to do one of his songs because his songs are better left alone,” said Bugnon, with a measure of humility. There is nothing you can add to a George Duke song. He composed them so well you don’t mess with his songs. So I’d rather right a song myself in his style. I can do that. I have nothing to add to anything George Duke has done. Nothing to add,” he chuckled.
The Attucks Theatre was a welcoming proving ground.