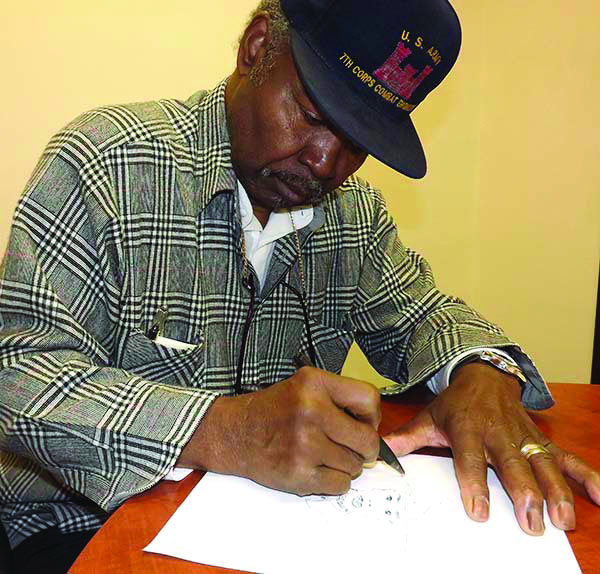 PORTSMOUTH
Like a thick fog covers up everything, the same feat occurred when Thomas Murphy began researching the Buffalo Soldiers several years ago.

He would stare into space and pluck a soldier’s face from his imagination. A sketch on paper would materialize in about 15 minutes. Although photographers snapped only a few images of the 10th Cavalry Regiment, Murphy, 70, has sketched and painted more than 100 faces. Black soldiers, or Buffalo Soldiers as they were called, served after the Civil War from 1866 to 1948. So what lines the walls of his Portsmouth home are soldiers who “were routinely abused, or even killed, for the slightest perceived offense … to undercut their authority,” according to PBS.
“I’m putting a face to the unknown,” Murphy said.

“I’ve studied a little off and on about them,” he explained. “As I researched these soldiers, I learned they received no recognition for their services. So I decided to do 100 faces of the unknown Buffalo Soldiers. But, by the time I got to the 35th one, I stopped. What motivated me to start drawing again was a men’s outing I attended at Third Baptist Church of Portsmouth in the spring of 2014.
“I told the men there that I wanted to continue drawing and they encouraged me to keep on drawing,” Murphy said. “I continued to watch TV and research them. My imagination continued to tell me the ones who were never seen, but served.”

On the website BuffaloSoldier.net, Stanford L. Davis characterizes the soldiers as “battle weary.” “Though they guarded railroads and telegraph lines, stagecoaches, arms shipments, towns, homesteads, whites and Indians, they never knew when they would be ambushed by foes or the very townspeople they were protecting,” Davis said.

“Not infrequently, just by entering a town or saloon, shoot-outs occurred,” Davis said. “There was also the occasional sniper, waiting for a kill. Those that murdered troopers were never punished for their crimes, even when there were witnesses. The troopers always responded with a deadly intent of their own. When investigated by the military, those troopers found guilty were punished accordingly, but not always.”

Murphy said his imagination and the facts guide him through the creative process. For example, he read about John Randall, a Buffalo Soldier who was attacked by Cheyenne Indians while he was guiding civilians on a hunting trip. Learning that Randall was wounded but survived, Murphy said the information pushed his imagination into high gear.
“They [the Buffalo Soldiers] didn’t have the sophistication to be photographed,” Murphy said.

His daughter, Shelita Williams said, “It touches my heart to watch him draw. It leaves me speechless.”
“He wants young people to learn about their history; so they will know how to chart their future,” his daughter added. “He tells me all the time that young people are not like we used to be. To me, the fact that he takes the time to try to live in that moment in history is passionate.”

In a sense, the sketches and paintings that line Murphy’s wall can be traced back to a talent that showed up around age 6. Add a stint in the military, and an active imagination. Presto!
Murphy who served in the Army from 1966 to 1968 said, “I wish every young man would go into the military. It gives him stability and things he could not learn at home, like how to carry yourself as a gentleman.
“I’m proud to have been in service.”