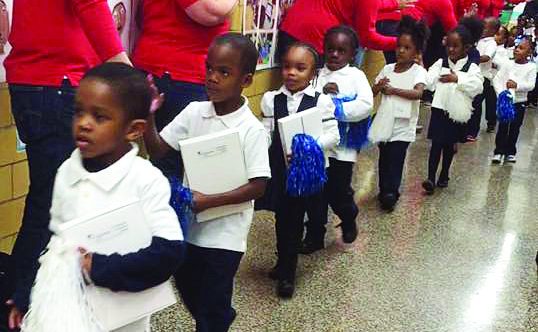 The curriculum and culture at Berkley Campostella Early Childhood Center (BCECC) is designed to give the 473 Pre-K to 1st graders attending the school, a strong foundation to enable them to prosper throughout their public school careers.

But now the students have the tools and resources which will enhance their ability to achieve that goal, thanks to Apple Computers.
The Berkley facility is one of 114 public schools nationally, the only one in Virginia and in the Mid-Atlantic, to win a ConnectEd Grant from Apple.

Now all of the students at the school have an iPad that they are using in the classroom and at home.
The school’s students, 36 teachers and 13 para-professionals and assistants, also have complimentary equipment, such as streaming Apple TVs and other gadgets in a building which has been rewired and outfitted with WiFi and Broadband connectivity, thanks to Apple.
The computer company provided the gear and the AT&T service which is wired in the building so the students can use it.

The Berkley Campostella Early Childhood Center is a Title 1 School, which means most of the students are from low income families and qualify for free or reduced lunch. Special funds are directed to Title I schools to bolster the level of personnel, programs and materials to help the children attending them keep pace academically.
Even if the children take the iPads home and their families do not have WiFi and Broadband connections, the machines are outfitted with components which will allow them to be used.

According to the school’s principal, Dr. Doreatha White, Apple provided training to all of the teachers and staff and will be providing technical instruction and support for the next three years.
Not only are the students who normally are assigned to the Center benefiting from the unique opportunity provided by the grant, but a number of students assigned to the Campostella Elementary School, now under construction, are too.

Until the construction of the new Campostella School is complete, its students are now housed in the old Bowling Park School.
The children using the iPads and other equipment in the classroom also are able to use them in space recently converted for physical activity where the children can expend energies through movement to help build their minds and bodies.

“This will transform and enhance our ability to educate and prepare our children,” said Dr. White. “We are developing young minds, and there is no price tag on any of the equipment. But the benefits for the children now and in the future are priceless.”
Dr. White said she heard from Apple’s CEO Tim Cook two years ago when she was researching and readying the application for the grant.

In June 2013, the Obama administration announced the ConnectED program, which would connect 99 percent of America’s students to next-generation broadband and high-speed wireless in their schools and libraries and modernize the E-rate program.

The National School Boards Association (NSBA) supports this initiative because high-speed connectivity is vital for preparing students and communities for success in a competitive global economy.
Apple is helping address that challenge with its contributions through ConnectEd with equipment and professional development support.

NSBA’s Technology Leadership Network (TLN) was invited to be one of 15 national organizations to help direct contributions to the district applicants that showed the greatest need and that articulated a vision of how Apple’s support would make a difference.
“What Apple states well is that making a difference requires a commitment that goes far beyond products,” said Ann Flynn, Director of Education Technology at NSBA.

“The company’s willingness to provide select ConnectED schools with an education team along with curriculum and infrastructure support reflects best practice in implementation.”
According to Apple, “The schools that were selected are incredibly diverse in demographics, geography, grade, and size. We will be working with elementary, middle, and high schools located in urban, suburban, and rural schools alike, in 29 states.

They range in size from 80 students to nearly 1,000 students.
Ninety-two percent of the students are of Hispanic, African-American, Native American, Alaskan Native, or Asian heritage.