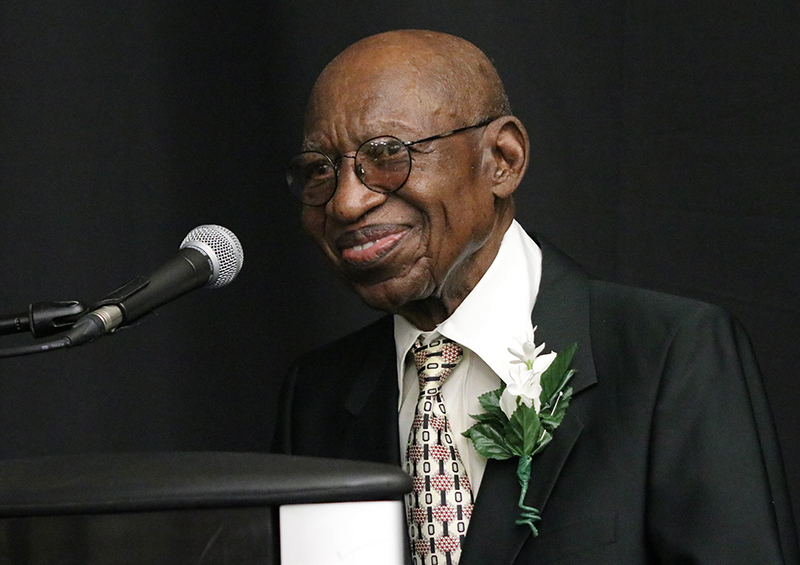 By Leonard E. Colvin and Glen Mason
Special To The Guide

“George devoted his life to service to his community and successfully fought to eliminate the inequity and inequality of our nation’s housing policies,” said Rep. Scott.

Norfolk’s elected Mayor Dr. Kenneth Alexander said, “He will always be affectionately remembered as ‘The Mayor of Berkley.”

“He never let up on his crusade against inequity, inequality and the complex roots of urban poverty. Mr. Banks spent his entire life as a community-based grassroots and civic leader, championing causes that led to numerous social, economic, political, cultural and environmental changes.” “Mayor” Banks was a lifetime member of St. Mark United Christian Church in Berkley, and enjoyed reading, ping pong and pool when he wasn’t championing the causes of the community. His strong personal skills in leadership, organization, planning, human resource, project management and problem solving, all led to his ordination as the Mayor of the community he served.

“My grandfather was a humble man and loved the Berkley community,” said his granddaughter, Christie Banks. “He emphasized the importance of giving back to your community. He could see the potential in a distressed community. We called him a visionary.

“I enjoyed our long conversations about civic involvement, partnerships, faith and life. He would always tell me ‘Don’t worry about what people say, let your work show for it.’ He was my mentor and I will miss him dearly,”

“To say that George Banks was a community leader does not do justice to this great man,” said the Honorable Judge JerrauldC. Jones. “Truly, he was a man who was small in stature but loomed large as a giant in the world in which he lived and worked,”

“When I first entered public life as a young attorney way back in 1981, I was counseled by people in the know to meet and get to know Mr. Banks (he was always Mr. Banks to me).

“Heeding that advice, I made myself known to him (he had known my late father before me) and the rest as they say, was history,” said Jones. “Whether it was the Beacon Light Civic League (he eventually engaged me to be their attorney), the NAACP, affordable housing and community reinvestment activity in his native and beloved Berkley neighborhood, or even politics, I was always looking to him for advice and counsel. He never hesitated to offer it. He knew and understood people and people cared about him. Indeed, Norfolk has lost one of its most important voices and valuable contributors. I have lost a friend. I will always cherish our time together. May he now Rest in Peace.”

“I met George Banks in 2013 as the Freedom Fund co-chair for the Norfolk NAACP,” said Joe Dillard, Norfolk’s NAACP president. “Being new to the adult branch, he was eager to help me along the path in the civil rights movement.

“The legacy he left as one of the finest branch presidents will continue to live on beyond any of us and I think that’s a testament to his dedication to community. When your work and the impact continues to live beyond you, you are in a different realm of influence. Names like Martin Luther King Jr., Malcolm X, Rosa Parks and Melinese Hutchinson live there. I will certainly miss the Mayor of Berkley but know that he is in a better place. As those on the Southside are often known for, they are one big family so this hurts everyone.”

“Mr. Banks was a mentor. He was an inspiration. He was a leader,” said Anne Boone, a Berkley community advocate and leader in the Berkley Historical Society. “Through it all, I never heard him raise his voice to get his point across.”

“Mr. Banks was a pillar in the city of Norfolk and his contributions to the community of Berkeley will go down in history as noteworthy, and he will forever be remembered,” commented Josephine Scott, a Berkley ambassador.
“A friend and a counselor, that’s what Mr. George Banks was to me,” said Juritas Thatch, a longtime friend and associate. “There was never a time that I called upon him and he was not willing to help or assist me in anyway,”

“I will always be embedded to him for the role in securing the Berkeley Community Center now located on Liberty Street. Whenever y ou look around the center in Berkeley you will surely see the foot prints that Mr. Banks left behind. I can hear the Lord say, well done my servant, now rest well.”

“Mr. George H. Banks was an iconic civic leader and activist,” said W.T.K.O Bernard “PEE WEE” Thompson. “His influence in my life was astronomical. His labor, his love, loyalty to his family, his church and community is second to none. I personally was the individual who benefitted from his knowledge and wisdom. He was morally and ethically sound. I am more than grateful that God allowed him to cross my path. He was a class act. He was a true servant of the people and his presence will be greatly missed,”

Born on November 28, 1932 in the Berkley section of Norfolk, VA to John and Fannie Banks, George Banks was married to Delores Williams Banks for 66 years and the father of two children daughter Cheryl Banks and Edwin Banks, predeceased.

Mr. Bank’s extensive work history experience included serving our country as a non-commissioned officer in the United States Navy, United States Naval Supply Center, Manager of Bell Diamond Manor and Sumler Terrace Apartments. He was a community advocate for the Beacon Light Civic League, Inc, Project manager for the Beacon Light Community Housing Development Organization, Inc. Mr. Banks was also a member of the Berkley Historical Society. He was inducted into the Hampton Roads African American Sports Hall of Fame into as a community contributor.

Mr. Banks served twenty years with the Norfolk Recreation Commission and Chairman of Berkley 1, 2, 3, 4, and was an advocate of its conservation. His civic projects involved Bell Diamond Manor, Lincoln Gardens, Sykes Midrise Apartments, relocation of Horace C. Downing Library, Berkley Fire Station, Southside Boys and Girls Club and St. Mark United Christian Church, renovation of the Berkley pool, director of the STOP organization. He was NAACP president from 1974 to 1980. Banks facilitated new recreation center in Berkley and cleaning the Mount Olive Cemetery. He also worked along with others to bring the Norfolk, Chesapeake, Portsmouth Credit Union (NCP Credit Union) to Berkley and the Berkley Shopping Mall.