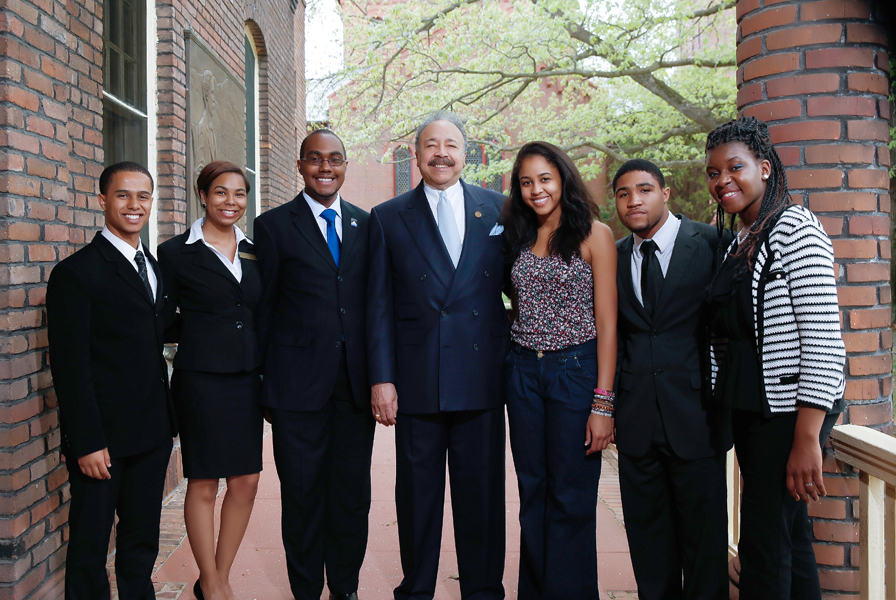 An “era” is defined as a long period related to technology, geology or a prominent figure or characteristic feature.
William R. Harvey has been the President and CEO of Hampton University since 1978. A period which has produced two generations of graduates
working and earning degrees in various professions at the 153-year-old institution.
Recently, Dr. Harvey announced he will retire during the summer of 2022 from the state’s oldest private Historically Black College and University.
There are varying measurements to define his legacy during his era of reign that include
From expanding the school’s endowment from $29 million to its current $315 to the construction of 29 new buildings, expansion of enrollment, and building a state of the art $225 million Proton Cancer Treatment Center.
Harvey said of the 102 HBCUs, their administrations and financial standings vary from the elite, which includes HU, to the mid-range status where most exist, to the more challenged, “HBCUs are viewed as a place people of color go if they cannot go anywhere else,” said Harvey. “We have the best and the brightest at Hampton because we are not just a typical HBCU.” According to Harvey, HU receives over 20,000 applications for its freshmen class each year. But the school accepts only a small percentage of the high school seniors representing the nation’s academically strongest African American and other racial groups.
Harvey is HU’s 19th President and the longest-serving president of any HBCU in Virginia and nationally, and he is in the top 1 percent of the longest-serving college or university leaders.
Harvey attributes his personal and professional success first to his parents and upbringing in his native Brewton, in southern Alabama.
His father was a successful contractor who built homes and even a shopping center in Florida during the days of Jim Crow.
Harvey recalls as a child, his parent’s home served as a restaurant, and at times, as a hotel for civil rights icons like Dr. Martin Luther King, Jr.,
and his entourage.
Jim Crow laws in 1950s Alabama did not provide Black people accommodations in “whites” only facilities.
As a youngster Harvey recalls listening and witnessing an inspiring gathering of Black leaders and their resolve, which is still etched in his leadership and personal DNA.
His father allowed him to sit in the corner of the living room, only if kept his mouth shut and did not divulge the contents from the discussions between his father, King, and other adults about
the state of Black America and the strategies needed to bring down the walls of Jim Crow.
“I was told I could listen, but never to reveal what I heard,” Harvey said during a recent interview with the GUIDE. “This is how I learned to listen. My dad told me that you have two ears and one mouth; one of them you must keep shut. It became useful.”
At Talladega (Alabama) College, where he earned his Bachelor’s degree, then on to Virginia State University, Harvard University and the U.S. Army, Harvey said other layers of his brand of leadership, decision making, and professionalism were formed.
He noticed that at each rung of the growth ladder, leaders and mentors “took an interest” in him and cultivated his ability to lead, listen and strengthen his ideals for the success he would use at HU to build young minds and skills.
Harvey, according to most people who know him, is tough and decisive, and is an astute academic administrator.
He is also, by his own admission, a keen businessman who is not shy about admitting he runs HU like a business enterprise.
He was one of the first African Americans to own a Pepsi-Cola Bottling Company distributorship.
He utilized the resources of Hampton University to build real estate and commercial outlets for the university, including a shopping center which sits
adjacent to Hampton University, and is one of the first sites one sees when approaching the campus.

During Reconstruction, after the Civil War, the federal government developed agencies to help millions of former enslaved Blacks, including the Freedman’s Bureau.
One of its agents was former Lt. Colonel Chapman Armstrong, who led a unit of Black troops during the war. With the help of the American Missionary Association, he established the Hampton Normal and Agricultural Institute—now HU—in 1868.
Native Americans and Black students received an education to become teachers and skilled in manual labor. He led the school for 25 years.
Harvey said he reached historically to the playbook of HU’s Armstrong to help build Hampton University into a premier educational institution.
Along with his parents, national civil rights and political leaders he deemed viable, the mentors he met in college and the military have all shaped him as the administrator and business leader he is today, at 79 years of age.
“He (Armstrong) insisted that the institution emphasize strong academic work for development
and character building,” said Harvey.
“He also believed in truth, dignity, rest, and trustworthiness. He was also courageous and innovative.”
Harvey said that his school’s value and assets have grown because “Hampton has good products to sell to investors,” such as its collection of weather satellites which can detect hurricane patterns 2,000 miles away and the Proton Cancer Institute, and other assets and holdings. It is also home to the oldest African American museum in the United States and the oldest museum in Virginia.
Harvey said he has enjoyed serving the local and national community beyond the HU campus.
He is lending his skills and advice on the boards of National Geographic, the Merit Scholarship Corporations, the National NAACP, Fannie Mae, Blue Cross, and the University of Virginia.
When he exits the presidential suite, Harvey said he will pack up among other things a “Rolodex” of contacts with some of the ablest
educational and corporate leaders in the nation, some of whom run trillion-dollar companies.
He anticipates curating his family’s vast art collection, writing his memoirs and a couple of novels to occupy a good portion of his
post-presidential life, he said.
When he departs his position, if asked, he said he would be willing to provide advice garnered from experiences to help advise and guide his replacement.
Harvey said he strategically announced his retirement two years in advance, to give the HU Board of Directors an amble amount of time to
search, find and vet his successor.
He said it will be a national search and he would leave the selection of the next president to the Board of Directors, but “I will have input,” to the skills and administrative insight to continue moving the school forward.
Harvey said that not only has he applied the virtues of good leadership, but he has also written, lectured, and instilled in people who have worked for him over the past four decades.
Seventeen of Harvey’s former administrative underlings have moved on to lead other colleges or universities.
Each of them has been schooled in developing a team, followed by a viable leader who adheres to a strong academic and administrative structure, fundraising, and using finances wisely, strategic planning, and choosing and mentoring new talent.
Along with those qualities—continuing traditions devised by General Samuel C. Armstrong— to foster good character, hard work, and
academic excellence from the school’s most vital product — the students.
“I believe no one person can do anything by themselves,” he said. “A good and competent team can help you do so many things. They have got to understand that there is no “I” in Team.”
He said that a leader will receive both applause and criticism and “I accept both.”
“I am a tough and strong leader,” said Harvey. “I am not one to stick my finger in the air to determine the direction of the wind.”