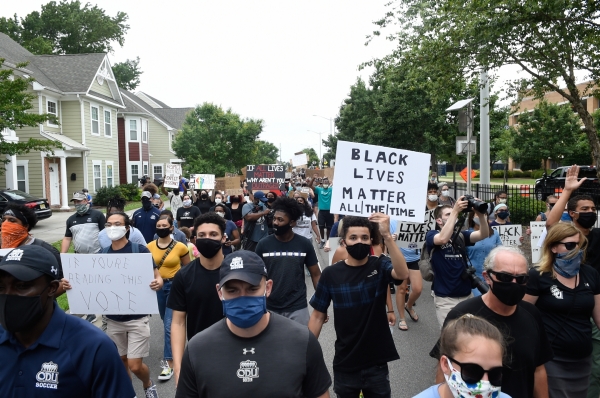 By Philip Walzer and Harry Minium

About 300 people participated on June 11 in a student-organized March for Justice at Old Dominion University to protest the killing of George Floyd and other African Americans.

At Webb Center, President Broderick said: “While we continue to send prayers to the Floyd family, that is not enough. I am joined by all of you to say again, ‘Black Lives Matter’ and also to say, ‘No more’ to the unjust deaths of George Floyd, Breonna Taylor, Ahmaud Arbery and so many others before them. Hate and prejudice have sadly continued, in part because it apparently takes a camera to fully capture an atrocity.”

“I knew from an early age that people would look at me and judge me by the color of my skin and because of my size,” said Taiwo, a former defensive lineman for the football team, who is 6-foot-5 and 315 pounds. “How many times do we have to have these protests and see riots before we see change in our country?”

Participants in the march included about two dozen football players, other students, coaches, faculty and staff and members of the community. Lisa Smith, the rector of Old Dominion’s Board of Visitors, also attended.

Many of the marchers held signs with messages including “Everyone vs. racism” and chanted Floyd’s name, “No justice, no peace” and “Hands up, don’t shoot.”

Johnny Young, an associate vice president for student services, recounted his experiences as an African American father of two sons. After every killing, he calls or texts them with the message: “If you get into a situation with the police, live to see another day.”

Other speakers included Lesa Clark, the executive director of the Office of Intercultural Relations. “When I see you and millions of people across the globe rising to stop the poison of racism from spreading, I have hope, Monarchs,” Clark said. “You are the great generation.”

Danielle Carter, the newly elected president of the Student Government Association, told the audience: “The only thing you can do wrong is doing nothing. If protesting is not your thing, get yourself educated on history.”

Rhonda Harris, the assistant vice president for public safety at Old Dominion, took questions from the crowd. “This may be the social justice movement of our lifetimes,” she said. “I appreciate your efforts. We’re all in this together.”

President Broderick concluded: “We have a responsibility to ensure that this tragic death of George Floyd serves as the start of a historic turning point in our country, galvanizing long-needed changes to abolish racial injustice.”

To see the video of the march, go to: https://www.youtube.com/watch?v=X1y83538j0E#action=share