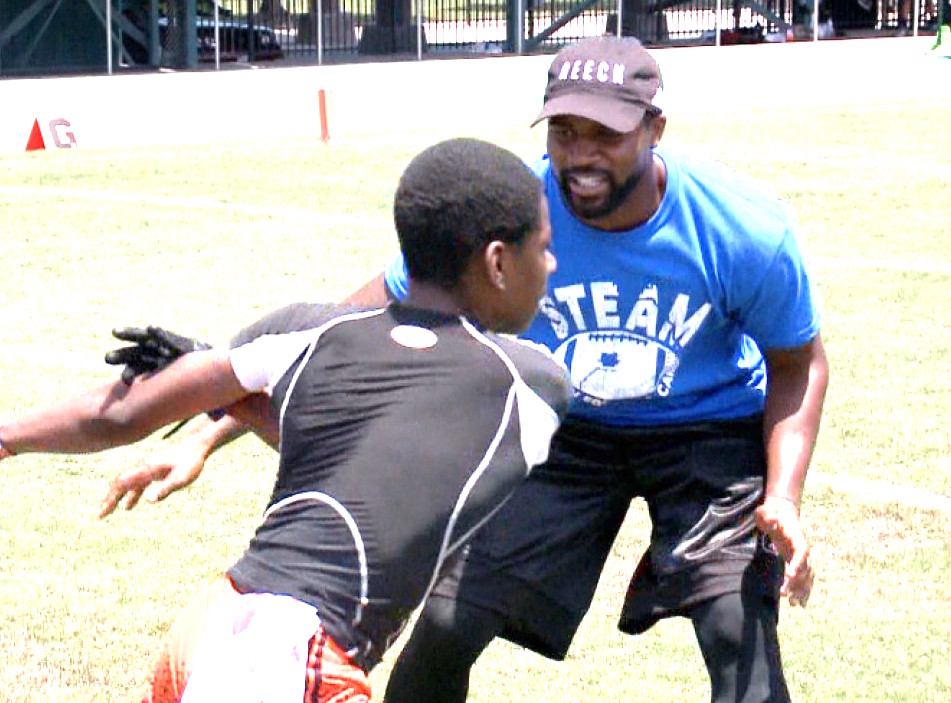 All three, now in their 30s, are highly regarded public servants. They were born into modest households, and each used football to access a college education and then played defensive for several NFL teams before retiring from the sport.

On August 13, the troika was featured in the third annual Black Philanthropy Month celebration forum organized by the Hampton Roads Community Foundation. The 2020 event, held virtually due to COVID-19, aptly focused on “The Powerful Intersection of Sports and Philanthropy”.

Many deep-pocketed philanthropists, such as Microsoft’s Bill Gates or McDonald’s Susan Kroc, give millions to construct buildings bearing their names or fatten the bank accounts of non-profits to help uplift the underprivileged.

Carey’s, Rolle’s and Rouse’s philanthropic visions seek to do the same, but they have a different blueprint.

They want to be role models to show that sports can be pathways to professional careers and leadership.

They benefitted from others investing in them. Now they use the blessings they earned to help youth overcome challenges they will encounter along the

Carey and Rouse, both local councilmen in their respective cities, operate foundations in the Hampton Roads area. Dr. Rolle is a neurosurgeon based in Massachusetts, who operates a foundation for youth in that area.

Carey was born in Michigan but grew up in Norfolk. He is a product of Norfolk’s Booker T. Washington High School and NSU. Before he left the NFL, he founded the “Reaching Educating Empowering and

It’s a joint venture he and his wife, Lakeisha, designed to

impact the lives of inner-city youth by expanding their educational horizons to access new opportunities.

So during the summer sports youth camps they sponsor, there is just one day of athletics show and tell. The rest of the time is spent on exposing the youth to academics options.

“We believe by providing students the opportunity of academic achievement and exposure to diverse arenas, they can ultimately be inspired to reach their maximum potential and become significant contributors to society”, reads the mission statement on the REECH website.

“Our main areas of focus are STEM (Science, Technology, Engineering, & Math), physical well being, health, social and moral responsibility along with vocational and collegiate preparation.”

Rouse was born in Norfolk and is a First Colonial High School grad in Virginia Beach. He attended Virginia Tech.

“As a retired National Football League player, I have had the great benefit of traveling our beautiful country, speaking to thousands of concerned parents and eager children from all over on what it takes to be successful,” Rouse wrote on his organization’s Facebook page.

“It became apparent that the importance of education was being inadvertently overlooked. That there was more emphasis placed on athletes and sports rather than students and education,” he continued. “It’s the aim of this organization to expose the youth to different learning environments (colleges), encouragements (workshops, forums), and reward our youth for the Academic successes in the classroom.”

Councilman Carey said, “Being an athlete is fine. But these young men need to have their horizons expanded and other opportunities. I want to focus on mentorship, to develop new leaders…new blood so we can solve some of the racial, economic and educational issues facing them

He continued, “I am legacy minded. I want to make sure after I am gone…I have passed down to another generation these ideas so they can pick up the pace and continue the progress.”

Carey said a good example was the father of Dr. Martin Luther King, Jr. “Daddy King” was a preacher and civic leader in Atlanta. He provided the resources and was a role model for his son who led the Modern Civil Rights movement.

Carey said in 2009 he was invited to the NFL combine, a week where college players display their skills to NFL teams in hope of being drafted into the League.

He had an interview with the Pittsburgh Steelers.

“I walked into the room and there was Mean Joe Greene ,” he recalled. “Also in the room was Mike Tomlin; he was hired as head coach two years earlier.”

Tomlin, a William and Mary alum, also has a charitable foundation and sports camp which meets each summer.

“He grew up in the inner city (Hampton) where there was violence he escaped as I did,” said Carey. “Seeing someone who had a similar experience reach such a level, was inspiring to me. I want to be that role model for the youth who will be our next generation of leaders.

Councilman Rouse said he grew up in the Young Terrace Public Housing area of Norfolk before his family moved to the middle-income enclave of Seatack in Virginia Beach.

He secured a degree in Sociology with a GPA of 3.0.

He has a son, who is 17 now, and along with being a college student-athlete, he was a parent running a family. He said he was reminded every day of commitment,

When he organizes one of his “Rouse’s House” camps, book bags are available, but athletes dishing out advice on the tackling and receiving techniques are not.

“We, on this team called America, are supposed to be winners,” said Rouse, who is 36. “So I invite educators, doctors, lawyers, firefighters, and policemen. Everyone will not be a superstar athlete, I tell them. Our children need to see people who look like them in such professions.”

“Coaches and family invested a lot in me,” said Rouse. “I want to reach back and create a pattern….to help our youth overcome the obstacles so they can be the next generation of trailblazers.”

“The greatest among us are the ones who want to serve,” said Rouse.

“This is how we can teach our children to overcome educational and economic obstacles which deter them from personal and professional leadership.”