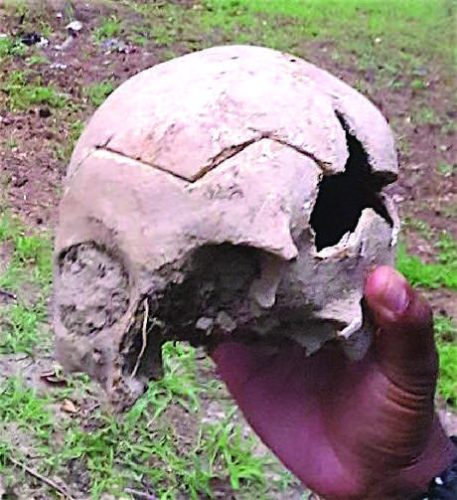 Last July when members of the William Tucker Association were cleaning up a graveyard where family members have been buried for decades, participants in the project made an interesting discovery.

According to William Harper, a family member and past President of the Tucker 1624 Society, a member of the work crew found a skull.

The cemetery which is located at 1 Sharon Court and Cornelius Drive, in Hampton, Virginia, is in the historic Aberdeen Gardens community.

It has been the burial ground for the ancestors of William Tucker, the first Black child born in an English Colony.

Harper said the family immediately called the police who notified the association that the skull did not belong to a victim of a crime or a missing person.

The association, which is composed mostly of individuals kin to the Tucker family, decided to determine the biological identity of the skull.

So they called the Virginia Department of Historical Resources. They did not want to call the local Medical Examiner, fearing that the agency would want to conduct a criminal investigation.

This would have, they feared, prolonged the effort to determine the identity of the skull, via DNA.

So they sent the skull off to the state in November and got a quick response.

“They were so nice and cooperative,” said Harper. “Their research indicated that it was the skull of a Black woman, who was 60 to 70 years old and may have been buried in the graveyard 400 years ago. We were so excited.”

Harper said the state scientist said the skull may have surfaced and was impacted by the constant exposure to the elements like rain, which could have complicated their ability to determine the age of it.

Harper said recently the family had a team, equipped with ground sonar, to use the technology to determine how many other people were buried at the family grave site.

He said the team determined there is an undetermined number of people buried at the site.

He said the state did not conduct a DNA of the skull which would have determined if it were a member of the Tucker family.

But the state examiners discovered that since the family was custodian of the skull they would have to bear the expense of paying for a DNA test of the skull to determine, if indeed, it belonged to a family member.

Harper said leaders of the Tucker Family Association have decided to place the skull back into the ground. There was a proposal to place it in the Hampton University Museum of History, but family leaders denied that idea.

Harper said perhaps later the family will raise the funds necessary to pay for a full DNA test to determine if the mysterious skull belonged to a family member.

On Friday, January 26, a ceremony was held to place the skull in a small casket and re-bury it in the cemetery.

The following day, William Floyd Tucker and his wife, Naomi Wilson Tucker, natives of Hampton, celebrated a half-century of marriage.

“So we will observe and respect the life of perhaps a family ancestor, who is long gone,” said Harper last month. “A day later two people who are still alive who are members of the family and continued its legacy will be honored.”