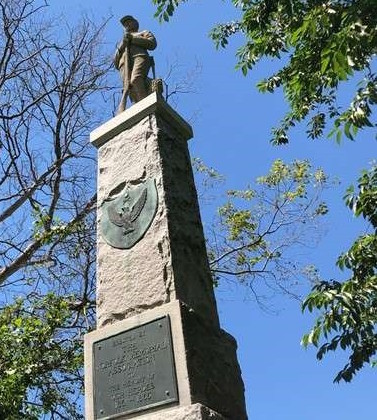 Norfolk’s Confederate Monument celebrating white soldiers who fought to preserve slavery will soon be relocated to Elwood Cemetery where rebel soldiers are also buried with civilians.
The 18-foot tall monument will stand a short distance from the one honoring 58 Black Civil War soldiers who fought to end slavery as members of the Union Army and are buried in its shadow at West Point Cemetery.
The two cemeteries are reflective of the historical significance of both monuments and the respective burial sites.
Elmwood was built to bury the city’s white residents.
Known initially as Potter’s Field, West Point was built at the behest of Black residents who wanted to bury their loved ones in dignity.
When West Point was constructed in 1873, a tall red brick wall was built to separate the two burial grounds and the dead Black and White people.
The wall still stands today.
The West Point Afro Union Soldiers Monument was dedicated in 1906, as a tribute to African American veterans of both the Civil War and Spanish American War.
While the Black churches and other civic groups raised money to build the structure honoring Black soldiers the United Daughters of the Confederacy, funded the construction of the one for “Johnny Reb”. Its
construction began on February 22, 1898 when the cornerstone was laid; it was completed in 1907
At the top of the Confederate monument, builders placed the image of “Johnny Reb” who fought to preserve slavery.
On the top of the West Point Monument for Black soldiers who fought inThe Civil War is Norfolk native Sergeant William H. Carney of the 54th Massachusetts Volunteer Regiment.
Carney, the first Black Congressional Medal of Honor recipient, escaped through the underground railroad in the 1850s northward.
The decision to move the Confederate monument to Elmwood came a month after Mayor Kenneth Alexander ordered city workers to take it down shortly after dawn on June 12.
Until it is moved, the monument sits in pieces at the old armory in the Villa Heights section of Norfolk.
Its removal from its pedestal at Commercial Place in downtown Norfolk, comes three years after council voted overwhelmingly to take it down.
That decision came after a white supremacist rally in Charlottesville in 2017. One of their supporters killed a counter protestor when he drove his car into a crowd where she stood.
Norfolk’s decision to take down the monument was motivated by city leaders fearing it would be defaced.
Another concern was that a protester might be hurt seeking to tear down the confederate monument, as
was the case in Portsmouth two days earlier.
The demands to bring down Civil War monuments around the country have been sparked by the death of George Floyd. Floyd died after a Minneapolis Police officer used a kneeling chokehold to murder him, as he cried out over 20 times that he could not breathe.
Two decades ago, Civil Rights Attorney, James Gay filed suit to have the monument removed. His request was rebuffed by the local courts.
One of his proteges, Roy Perry-Bey, a leader of the United Front For Justice (UFJ), filed a suit two years ago to have it removed. It was still being considered by the federal courts when the city decided to take it down.
Two weeks ago, the Norfolk council formally voted to have it moved eventually to Elmwood Cemetery which sits along the 200 block of East Princess Anne Road in downtown Norfolk.
Thanks to a law which came into effect July 1, the legislature freed Norfolk and other cities from a state law forbidding them to remove such statues if they honored heroes who fought in war and it was not owned by the city.
Norfolk owns the 113-year-old monument, built in the area where slaves were sold, and housed in the city’s pre-Civil War Market Square where Commercial Square is now.
At West Point Cemetery, there are over 100 Black servicemen buried near the monument of Sergeant William H. Carney. The headstones of 58 Black soldiers, who are Civil War veterans, are buried there. Others fought in the Spanish American War.
One of the Civil War Patriots is Norfolk native Sergeant James Fuller, who was born in 1846 and died in 1909. He was the force behind the monument’s
installation.
Fuller was a former slave and a Civil War Veteran quartermaster in the First United States Colored (Cavalry) Troop (USCT).
In 1885 Fuller, Norfolk’s first African American Councilman, requested that Potter’s field be named West Point Cemetery.
Councilman Fuller insisted that a section of the cemetery “…be dedicated as a special place of burial for Black Union veterans…”
Thus, Section 20 was “donated to the Directors of the Union Veterans Hall Association for the burial of the members of the Grand Army of the Republic.” Fifty-eight Afro-Union soldiers are interred in Section 20. Under the leadership of Fuller and the Norfolk Memorial
Association, the West Point monument was erected in honor of African American soldiers and sailors of all wars. The base of the monument was completed in 1906 and the statue depicting Sergeant Carney was added in 1920. Although Fuller died in 1909, the African American
community continued to work for another 11 years to bring his vision to fruition.
It was listed on the National Register of Historic Places in 2007.[1] It is contiguous with Elmwood Cemetery, listed in 2013. Fuller’s grave is a short walk from the monument.
The Portsmouth City Council voted recently to approve an ordinance to transfer $250,000 from the non-departmental general fund budget to the department of engineering budget to remove the Confederate monument that sits at the intersection of Court Street and High
Street.