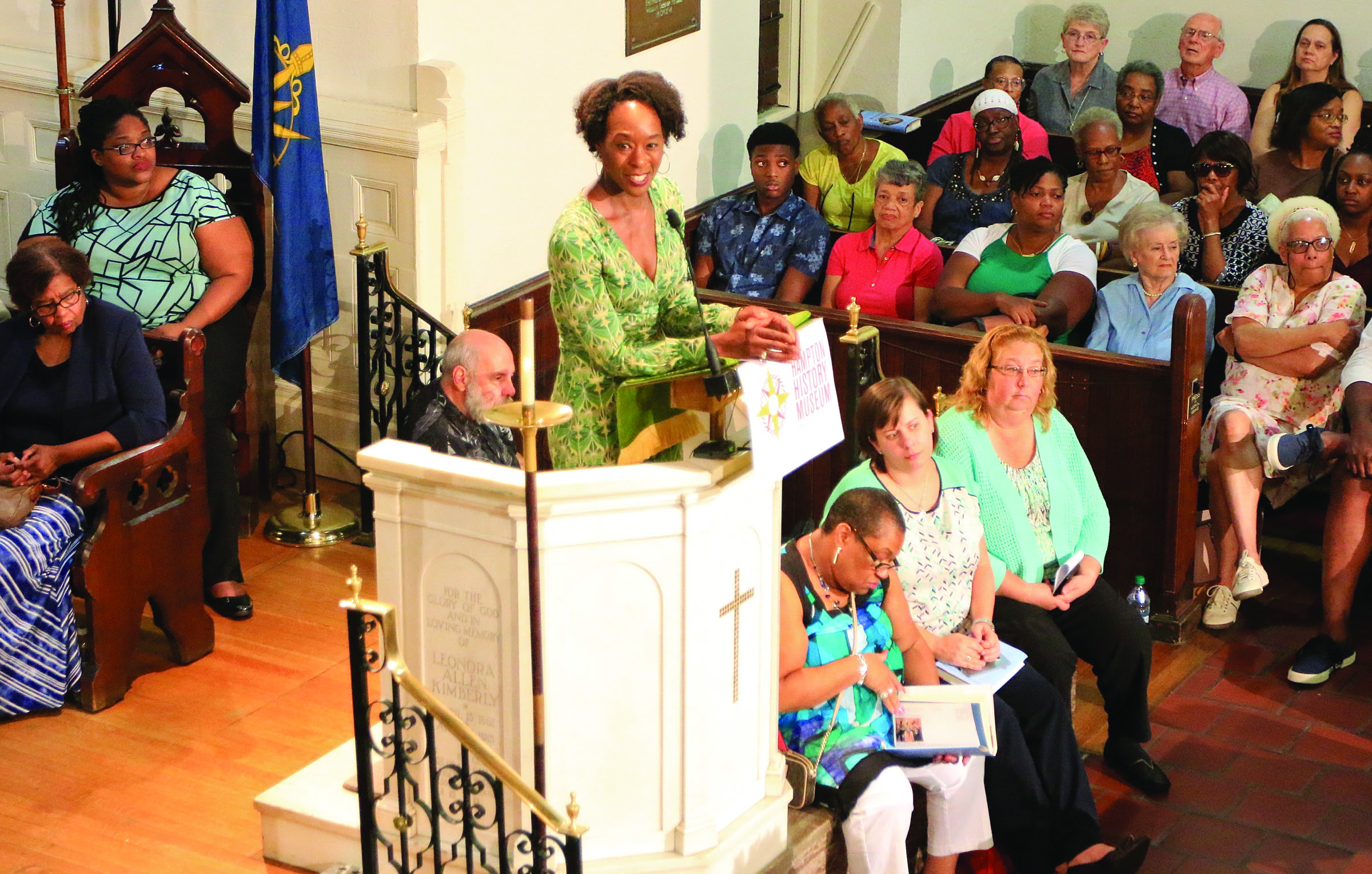 Today a “computer” is a common tool to calculate and to control every device in our reach, including our cell phones. Plus, computers provide countless other applications that run our lives. But 63 years ago, before machines took over that role, Catherine Johnson joined a special group of 1,000 women who held the title of “computer” at then Langley Memorial Aeronautics Research Center in Hampton. Now it’s called the Langley Air Force based in Hampton, Virginia.

Mrs. Johnson, who still lives in the area, made history in 1953 as one of the 80 African-American mathematicians employed as ”computers” at the National Advisory Committee for Aeronautics (NACA) before the mechanical computer existed. Today NACA is known as NASA (the National Aeronautics and Space Administration). Her story and others is told in a newly released book, “Hidden Figures,” by Margot Lee Shetterly, who hails from Hampton, and returned home last week to launch her book at the Hampton History Museum.

Shetterly was greeted by hundreds of well-wishers who turned out to purchase her book and hear the story she has painstakingly researched and is sharing with the world. Due to an overflow crowd at the museum, the gathering was moved to nearby St. John’s Episcopal Church where every available space was occupied. The event was streamed live by C-Span. Johnson and the other Black and White women were hired to measure and calculate wind tunnel test results on the first jet aircraft and other projects. She was part of the research which wrote the book used to propel the nation into space and then the moon.

John Glenn, the first American sent into the space, requested Johnson specifically, to reaffirm the calculations used to ensure his safe launch, orbit and return. On January 13, a movie “Hidden Figures” based on Shetterly’s book will debut around the nation, depicting the work and role of Johnson and three of the other African-American women “computers” who made history.

Along with Catherine Johnson, who will be played by Taraji P. Henson, Dorothy Vaughn will be portrayed by Octavia Spencer (The Help), and Mary Jackson will be portrayed by Janelle Monae. Shetterly said her father first told the story of the women computers to her and her husband which inspired the book. Shetterly’s father was one of the first Black professionals to work at Langley as an engineer and led a family who lived in the Black section of Buckroe in Hampton.

In the September 26, 2013 edition of the New Journal and Guide, the Guide interviewed Shetterly who outlined how she had uncovered a picture which appeared in the May 8, 1943 edition of the Guide. It showed the first 11 women who participated in a 10-week, “Engineering Fundamentals” course taught at Hampton Institute. That picture can be seen today on the book’s cover.
“The Journal and Guide and other Black newspapers and the Black colleges played a significant role is making the story happen,” Shetterly, said three days before she did the presentation on her book at St. John’s Church in Hampton.

Shetterly said the first chapter of the recruitment, hiring and training of Black people, in general, for the nation’s science and aeronautics program was written by civil rights icon A. Phillip Randolph. When the U.S. entered World War II, and men were needed to fight, many manufacturing and tech jobs shifted from White men to White women, especially at government-run agencies such as the NACA which used its resources to support the war.

Randolph led the National Black Pullman Car Union, and he and other Black leaders urged President Franklin D. Roosevelt to open the door of industry employment to African-Americans at all levels. Initially, Roosevelt ignored their plea, Shetterly said. But in 1941, Randolph threatened to stage a protest march on the nation’s capital and the threat worked. “The Journal and Guide and other Black papers wrote about the recruitment effort and even ran advertisements telling Black people how to apply for these civil service jobs,” said Shetterly. “Organizations like the Urban League promoted it, too. The Black network of churches, colleges and other organizations got the word out to the Black community.”

In 1943, the first African-American women highly skilled in mathematics were hired for the Langley and Goddard Research sites to do the complex equations to help propel the nation’s war industry. These Black women joined the existing pool of White women mathematicians who analyzed endless arrays of data from wind tunnel tests of airplane prototypes. Women were thought to be more detail-oriented, their smaller hands better suited for repetitive tasks on the manual adding machines.

Shetterly recalls as a child, accompanying her parents to events at Langley and elsewhere where she and her parents mingled with some of the most accomplished Black scientists, physicians, teachers and other professionals in Virginia in the late 1960s. At the time she did not realize she was mingling with Black adults who had paved the way for her father and other professionals who came to Langley by the mid-60s, when the space race was underway and the nation was seeking to send a man to the moon and beyond.

“Mrs. Johnson and others arrived at Langley before the space race began actually and she was working on the math related to developing aircraft for the military,” said Shetterly. “She recalled working among her ‘brainy’ colleagues on a number of projects. “All of the women were called ‘girls,’” said Shetterly. “They sat in labs and answered the mathematical questions sent to them by the engineers who were testing and designing planes and their various components.”

Although a White woman supervised her work initially, Shetterly said Mrs. Johnson recalls that Mrs. Vaughan, another Black woman portrayed in “Hidden Figures,” would eventually lead it. “Remember this was during Jim Crow segregation and all of the Black women and men worked in the west section of the research complex,” said Shetterly. “Imagine you have an advanced degree in math or other disciplines, but you have to use the colored bathroom, the colored cafeteria and work in an area for colored only.”

Shetterly said Mrs. Johnson, like the Lee family, lived in the “colored” section of Hampton and attended church and other social events apart from their White co-workers. “But Mrs. Johnson recalled there were times she and other Blacks worked alongside White colleagues,” said Shetterly. “Many of the Whites were Jews, Whites from the North or West and because of their education did not harbor the racial mindset common among native southerners.”

Life for Johnson and all of the scientists changed in October of 1957, when the Soviet Union launched the Sputnik Satellite into space. “That shocked the whole nation,” said Shetterly. “The nation starting focusing on catching up with the Soviets, and they went to the drawing board working on putting a man in space. “Mrs. Johnson said she and her colleagues at Langley held intensive training programs and developed the textbook on ‘how to put a man in space,’” said Shetterly. “Later PresidentnKennedy issued the challenge to put a man on the moon.”

Johnson and other women were assigned to work on the Jupiter and Apollo space programs which culminated in the U.S. landing on the moon in 1969. Mrs. Johnson was part of the computing team for the crucial flight involving John Glen, the first American on the moon. The plan was to launch Glen from Florida, have him circle the earth three times and then splash down at a specific point in the Caribbean. Precise calculations of lift, weight, speed and other factors needed to be exact and NASA used mechanical computers.

“Glenn did not trust the calculations produced by the machines and asked the program directors to ‘get that girl (Johnson) to work the numbers and see how they compared with the machine’,” said Sheerly. Johnson did the numbers and they coincided with the machines and John Glenn made history. Shetterly is a 1991 graduate of UVA and recently moved to Charlottesville after living and working in Mexico with her husband where they ran a tourism consulting company.

“I am still encountering people who are so angry that they did not know about this piece of history,” said Shetterly. “They said it could have inspired them. “These women and men were not only pioneers in crossing the race lines, they paved the way for many scientists and other professionals. We owe a lot to their hard work and contributions.”
To view brief video of Shetterley’s presentation, visit our Facebook page and YouTube channel.