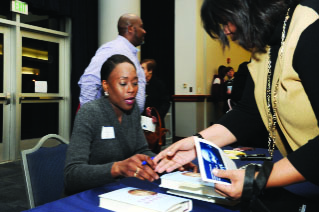 Shetterly, who served as a keynote speaker for Old Dominion University’s 33rd annual Martin Luther King Jr. observance event, is a Virginia native. She thanked the crowd for coming and said she couldn’t be more grateful to speak in her home state.

“Since Hidden Figures was published in September I’ve had the privilege to speak at a number of places, but there is nothing like being at home here in Hampton Roads,” she said. Shetterly gave a brief history of Katherine Johnson, Mary Jackson, Dorothy Vaughan and Christine Darden, the Black women mathematicians depicted in her book whose work at the NASA Langley Research Center helped put Americans on the moon.

Shetterly said the women tackled issues, “familiar to us all,” like “the search for meaningful work, the fight to provide a better future for our families, the restlessness of personal ambition, the fear of the unknown and what it means to be American.”

During the event, awards were given to three recipients who have demonstrated leadership and dedication through their work and achievements. La Wanza Lett-Brewington, director of ODU’s Women’s Center, presented Angela Reddix, CEO of Norfolk-based firm ARDX, with the Women of Achievement award. Clenise Platt, an award-winning author and the Women’s Club of Norfolk were awarded the Hugo Owens Martin Luther King Jr. Memorial Award which is given in honor of Dr. Hugo A. Owens, the first African-American rector on ODU’s Board of Visitors.

Stephanie G. Adams, dean of ODU’s Batten College of Engineering and Technology, thanked Shetterly and said she hoped the book and the movie will motivate aspiring college students to pursue careers in science, technology, engineering or mathematics (STEM).

“As a nation, it’s imperative that we attract more people of color and women to these disciplines and your book and the movie might just be the catalyst we need to get that done,” Adams said to Shetterly. “It not only breaks stereotypes about who can study these subjects but it shows that it’s cool to be smart.”

Shetterly credits her husband and father, Robert Lee, for bringing “Hidden Figures” to life. She said her husband listened to stories that her father would tell about his experience and career as a researcher at NASA Langley Research Center. Lee worked with the women and they were also members of her mother’s sorority, Alpha Kappa Alpha Inc.

“These women were all around me,” Shetterly told the crowd.

Shetterly said she was very happy about the film and encouraged the audience to see it if they already hadn’t.