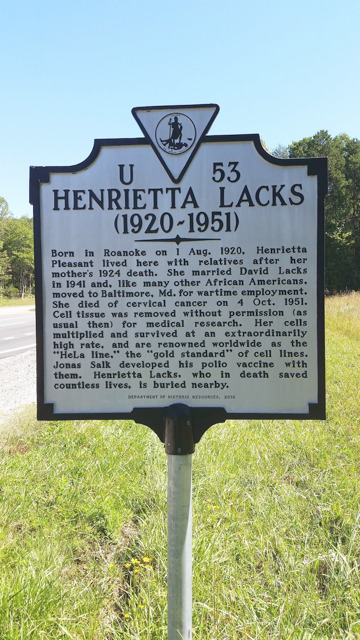 If you live in Roanoke, you may soon visit a brand-new statue in a downtown plaza that honors Henrietta Lacks, the Virginia woman who contracted cancer, sought treatment at a Baltimore hospital, and unknowingly donated an untold number of HeLa cells to other cancer patients.

Roanoke Vice Mayor Trish White-Boyd launched the fundraiser a few months ago, according to news reports. White-Boyd has already raised $89,000 of the $160,000 that is needed to honor Lacks, who was born in Roanoke in 1920 and made history after she was treated for cancer in Baltimore around 1951. The new life-size bronze statue will be erected in Henrietta Lacks Plaza, the new name for Lee Plaza which Roanoke City Council renamed in July 2021.

“People are kind of expecting something to be there,” White-Boyd said in a recent interview with WSLS-TV-NBC. “Right now, it’s just a slot of cement.”
White-Boyd added, “When people hear the story and understand the significance of it, I think they want to be a part of it. I think that’s why we have the traction we have now.”

Plans call for adding a virtual reality presentation that will cost an extra $40,000.
The plan is to partner with the Richmond organization, “Hidden in Plain Site,” to help create a multimedia project that will honor Lacks for a lifetime.

To help support the project, send a check to the Harrison Museum at P.O. Box 21054, Roanoke, 24018 with “Henrietta Lacks” written in the memo box.
It seems that Lacks name is well-known miles away from her hometown. In October 2021, Lacks’ family attended the unveiling of a life-size bronze statue of Lacks at Bristol University in Bristol, England.

Her son Lawrence Lacks, who was 17 when his mother passed away, was joined by her grandson Alan Wilks and his wife Pam, granddaughter Jeri Lacks-Whye and great-granddaughters Victoria Baptiste and Veronica Robinson.

The statue is the work of Bristol artist Helen Wilson-Roe and is the first public statue of an African American woman designed by a woman of color and permanently installed in the UK.

It follows the exhibiting of two of Wilson-Roe’s portraits of Henrietta Lacks and Cleo Lake, Bristol’s first Black female Lord Mayor, which have been on display in the Wills Memorial Building since October 2020.