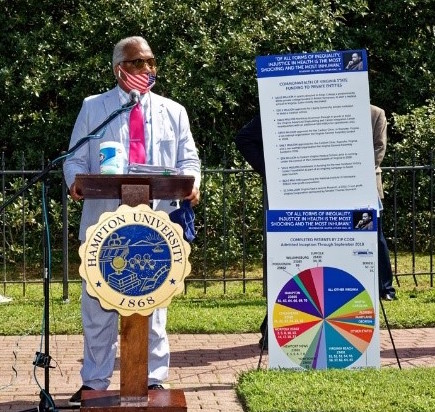 HAMPTON
Hampton University leaders say the university’s state of the arts cancer treatment center is not receiving its fair share of government funding and support for its mission.

During a press conference on Sept. 2, HU representatives said the Hampton University Proton Institute (HUPI) has never received the funding it was promised from federal, state and local officials, in the fight against cancer. At the same time, other institutions have received help.

Bill Thomas, Hampton University Associate Vice President of Government Relations, made the case for HUPI, noting that African Americans face overwhelming disparities regarding incidence and mortality rates for cancer. To make matters worse, he said, cancer is among the main underlying causes of death for Covid-19, which has also disproportionally affected the Black community.

HUPI is the world’s largest free-standing proton therapy cancer treatment center. When Hampton began building its facility, there were only three centers in the United States. Currently, there are ten centers across the nation with Hampton being the largest of its kind in the world.

It was borne from the visionary leadership of Hampton University President Dr. William R. Harvey, after being presented with data showing Hampton Roads led the nation in prostate cancer deaths and African American men were more than twice as likely to die from cancer than white men. Dr. Harvey secured private funding for it and the Institute opened in 2005.

Today, in addition to data showing Black males are more likely to die from prostate cancer than any other ethnic group, new data show African Americans have died from Covid-19 at almost three times the rate of their white counterparts.

Since its opening, HUPTI has treated more than 3,000 patients for various cancers with millimeter precision and minimal side effects. Currently, it is equipped to fight Covid-19 by testing the condition of lungs with the acquisition of an MRI machine in October.

According to HUPI advocates, other institutions have been receiving help to support their mission and much more should be done to fund and bolster HUPI’s efforts.

HUPI pointed out in its press announcement, with cancer claiming the lives of Black Panther actor Chadwick Boseman, as well as former NBA All Star Clifford Robinson, aged 43 and 53, respectively, within the last few weeks, “it is painfully clear that the epidemic level health iniquities seen in the Black community are not tied to life stage or socioeconomic status,

During the press conference, Thomas, speaking on behalf of HUPI, elaborated, “Being rich, prominent, and young won’t even counteract this if you’re Black. Just imagine if you’re old and poor. Something has to be done.”

“We’ve done our part and helped ourselves,” Thomas said. “Dr. Harvey built this quarter billion-dollar facility without significant help from the Federal Government or the Commonwealth. We can help eliminate these tragic stories. All we’re asking for is fairness.”