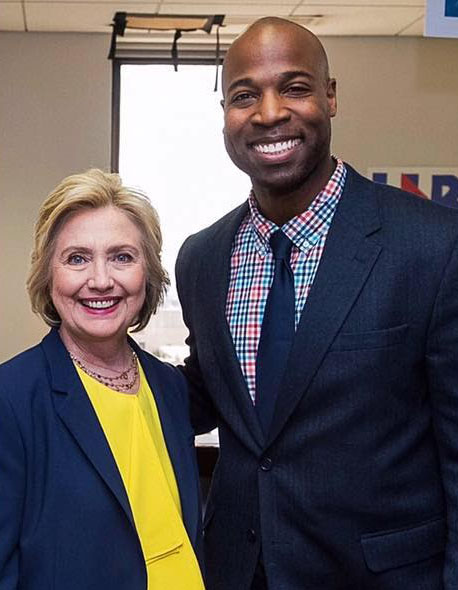 Hampton University alumnus Bernard Coleman is making great strides for diversity in the 2016 presidential election. He has become a key figure in Secretary Hillary Clinton’s campaign attempting to be the solution the plagues corporate America. His historic role as Chief Diversity & Human Resources Officer for “Hillary for America” presidential campaign is reflecting how strongly Secretary Clinton feels about diversity. This position is the first of its kind for any presidential campaign in U.S. history.

Coleman has held this position since the beginning of the campaign in April 2015. He has the important responsibility of overseeing diversity and inclusion throughout the entire campaign. “Diversity is really important, the country is demographically changing… people should embrace that change to leverage and empower others in a sense that we can keep America great,” said Coleman.

Coleman has assisted in building a stronger diversified staff for Secretary Clinton’s campaign with 30 percent of the about 700 people being non-white and 52 percent being women, while senior leadership is 54 percent women and 34 percent people of color. Emily Peek, Executive Editor, Business and Technology of the Huffington Post said it best, “Clinton desperately needs Coleman, who is also the campaign’s head of human resources, to succeed. A diverse staff is key to helping her understand an increasingly diverse electorate, where whites represent a declining percentage of voters,” Peek wrote in article published in May 25, 2016 on HuffingtonPost.com

After graduating from Hampton University in 2001 with a Bachelor of Arts in psychology, Coleman has since gained a plethora of experience in politics and human resources. He has held senior level roles at the Democratic National Committee, Democratic Congressional Campaign and the Society for Human Resource Management. Each role allowing him to implement changes and new employment opportunities that affect the growing level of multiculturalism in today’s society.

Coleman still uses the valuable lessons he attained at Hampton University in his career and hopes to continue his works in diversity even after the campaign has ended. He has increased diversity throughout his staff and has high hopes for, Secretary Clinton and the campaign. As an HBCU alum, Coleman said his educational background has given him perspective in life. Though he attended predominately white high schools, Coleman is a true product of HBCUs. His father graduated from Norfolk State University and his mother from St. Paul’s College. When given the chance to attend Hampton University, his experience gave him balance. He wants to give those same values to his children hoping to encourage them to always keep fighting on even through times of adversity.

“I have two daughters and I want to make sure the world they inherit is better and I think diversity and inclusion is the centerpiece of this country. I believe Hillary Clinton is the person to move that forward” said Coleman. Now that Coleman is working on a national presidential campaign he believes his work is even bigger than before. The push for diversity in the workforce is a growing issue in America. Coleman believes that his work has allowed him to tackle this issue in order to open more opportunities for people of color and hopes to continue this work all the way into the White House.