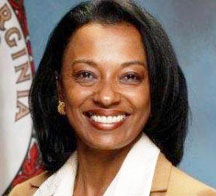 RICHMOND
Dr. Dietra Trent was recently appointed by Gov. Terry McAuliffe to serve as secretary of education, replacing Dr. Anne Holton. Holton resigned from the post after her husband Sen. Tim Kaine was selected as Hillary Clinton’s vice presidential running mate. Trent is a Hampton University graduate. She earned a master’s and a doctoral degree in public administration and policy at Virginia Commonwealth University. She also worked for Rep. Robert C. “Bobby” Scott, D-3rd, as well as Gov. Mark Warner, as director of constituent services and director of the Council on Human Rights.

“I will try and take it up to the next level, but we’ve been pretty productive,” Trent, 52, said in a recent interview in the Richmond Times-Dispatch. Despite the new title and new office, Trent is promising continuity. “I think the one thing we all share in this administration is a passion for education – making sure that our challenged schools and our challenged students are receiving what they need, and also making sure that our underrepresented populations have equal access to a great education,” Trent said.

Trent served for two-and-a -half years as deputy secretary of education under Holton, whom she described as a mentor. Another mentor, Trent said, was her late grandmother, Faustina Trent, a strict but widely respected first-grade teacher who retired from teaching after 40 years and began volunteering with the Save the Children Federation, which matches low-income children with concerned sponsors.