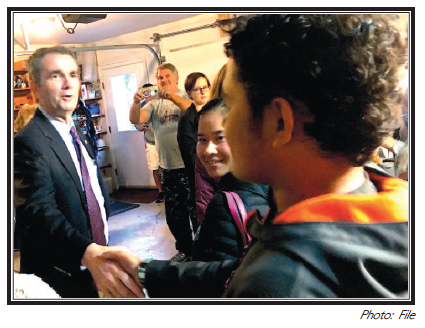 During his two runs for the State Senate, Lt. Governor and then Governor in 2017, Dr. Ralph Northam received considerable support from African-American voters and their political, civic and religious leaders.

Like most White Democrats seeking statewide or national political office, the Black vote is the one of the strongest parts of the party’s base of support for these candidates.

But now many of those voters and Black leaders have joined a local and national chorus calling for Northam to resign over first his admission and then rejection of himself in an image in either Blackface or in a KKK costume in his 1984 Eastern Virginia Medical School Yearbook.

But Governor Northam, as of Wednesday Feb. 6 at press time, has refused.

The controversy began Friday, Feb. 1, the first day of Black History Month, when a right-wing website, Big League Politics, posted an image of Northam’s yearbook page from 1984 at Eastern Virginia Medical School in Norfolk. The page had three identifiable photos of Northam and a fourth unidentifiable photo of two persons – one wearing Blackface and one in a Ku Klux Klan outfit.

On Friday afternoon, the Governor said in a prepared written statement that was followed up later that day by a video of him reading his statement from his office that he was one of the persons in the racist image. He did not say if he were the individual in Blackface or in the KKK costume.

However, on Saturday, the following day at a 2:30 press conference, Northam reversed his statement to say he was neither person in the photo. He explained that he had more carefully reviewed the photo and was certain it had been placed on his page in error.

He continued to explain that he had indeed darkened his face with a little shoe polish that same year as part of his Michael Jackson costume for a dance contest in San Antonio, Texas.

Reaction to the Governor’s reversal brought its own set of new criticism and increased the calls for his resignation.

Among those calling for his resignation is Democratic State Sen. Louise Lucas, who appeared on the Sunday Feb. 3 edition of Rev. Al Sharpton’s MSNBC show “Politics Nation.”

Sen. Lucas of Portsmouth said that on the evening of Feb. 1, Northam called her and said “he was in the picture and he apologized for his behavior and asked me to forgive him. He said he knew it was wrong and hurtful.”

Lucas told Sharpton such racist behavior was not surprising to her for she dealt with it as President of the Portsmouth NAACP, nor was she surprised that he called.

But she said she became angry and was surprised when during the press conference on Feb. 2, Northam retracted his admission that he was in the yearbook picture.

Sharpton asked her how can state lawmakers respect his leadership considering such a reversal.

“He asked us to put our trust and confidence in him,” said Lucas. “And then for him to come and flip flop makes what he says even more untrustworthy. He said one thing one time and the opposite another time. It’s difficult to believe anything he says. It is time for the Governor to do the right thing and step aside.”

Lucas said, “Northam has lost all moral authority to lead.”

She continued, “As long as he stays in that mansion, Virginia will not be able to heal and move forward. He can help us with the process and go around … and tell people what they should not be doing, but not from the governor’s mansion.”

Lucas is a member of the Virginia Legislative Black Caucus which called for the Governor to resign.

Democratic State Senator Lionell Spruill said he attended the Black Caucus meeting with Northam and after hearing him out, they later left and voted overwhelmingly to call for his resignation.

“The Governor is a hell of nice guy,” said Spruill. “He has been on our side on many key issues; he has done what we asked. But unfortunately, his past has caught up with him. I think we can’t move forward until he does the right thing.”

“We amplify our call for the Governor to resign,” the caucus wrote in its statement. “We cannot continue this work with Governor Northam at the helm. The damage that has been done by these revelations is irreparable. Our confidence in the ability to govern for the 8 million Virginians has been eviscerated. Another moment should not pass before … Governor Northam does the honorable thing and resign.”

Hours after Northam held his Saturday press conference where he backtracked from his admission, former Virginia Governor L. Douglas Wilder called for Northam to step down, via Twitter:

“… Gov. Northam’s continuing in office was his choice to make. It is difficult for anyone who watched the press conference today to conclude that he has any other choice … but to resign.”

Democratic U.S. Congressman Donald McEachin, D-4th, whose district includes Chesapeake, Richmond and parts of its suburbs, appeared with Rep. Karen Bass, a California Democrat who is the chairwoman of the Congressional Black Caucus, on Sunday’s NBC’s “Meet the Press.”

McEachin, who served in the state Senate with Northam, said, “I want America to remember that this is the 400th anniversary of Africans coming to the shores of Jamestown in chains, and so the look of that commemoration service combined with a governor that’s been talking about Blackface, and misleading us about Blackface, is not the look that I think Virginia wants to portray to the nation.”

In historical context in 1984, the Rev. Jesse Jackson sought the Democratic Party nomination for President and won the state primary, the first Black person to do so. One year later L. Douglas Wilder was elected Virginia’s Lt. Governor and four year later its first Black governor. Michael Jackson was involved in a music tour that spurred the use of music videos. The anti-apartheid movement was underway.

Third District Congressman Robert Scott, the highest ranking Black politician in the state, called for the Governor “to make the right decision that is best for the Commonwealth of Virginia.”

“It is never easy to condemn a personal friend, but Governor Northam’s past behavior is indefensible. I know the Governor has dedicated his life to public service, and he has advanced policies to help African-Americans and Virginians from all walks of life. I take him at his word that he is deeply sorry, and that he understands that his behavior was inappropriate and offensive.

“History will have to judge his life and public record, and this chapter will be a major stain on that record.”

“After we watched his press conference today, we called Governor Northam to tell him that we no longer believe he can effectively serve as Governor of Virginia and he must resign,” the duo said.

The National Medical Association (NMA) which represents the over 50,000 African-American physicians in the United States and its territories issued a strong statement calling for Northam’s resignation.

NMA’s President, Dr. Niva Lubin-Johnson who graduated from medical school in 1984 when Northam’s Eastern Virginia Medical School yearbook was published, wrote, “The behavior exhibited in the photo of Dr. Northam wearing Black face and standing next to a classmate wearing a KKK uniform was not acceptable behavior for my classmates and me at Southern Illinois University in 1984. This being a different time is not a rational or plausible reason to condone such despicable behavior as a medical student. His inability to acknowledge the seriousness of this situation is not acceptable.”

She continued, “What is equally disturbing is the fact that Eastern Virginia Medical School saw nothing wrong with publishing such racist images and did not consider the impact these images would have on students of color until exposure on social media. The failure of leaders at Eastern Virginia Medical School to act and prohibit such hurtful imagery from being published flies in the face of the medical profession’s ethical mandate to ‘first, do no harm.’”

“What you are doing when you are 25 whether it is stupid or not is reflective of your values,” said Former Portsmouth Mayor Kenneth Wright. “Whether he is under the hood or the one in Blackface, it’s reflective of his view of the world whether it was two years ago or 20.”

Norfolk NAACP President Joe Dillard issued a statement calling for the Governor’s resignation that read, “Ralph Northam made a decision 30 years ago to attend a party as a racist persona. That’s certainly what he claimed on Friday. His press conference Saturday just confirmed his apology was not sincere. He must resign as Governor of Virginia.”

Andrew Shannon, Peninsula SCLC Chapter President and State SCLC Vice President, said, “It is our hope that we will be able to individually and collectively work together to make a positive impact in our community and nation.