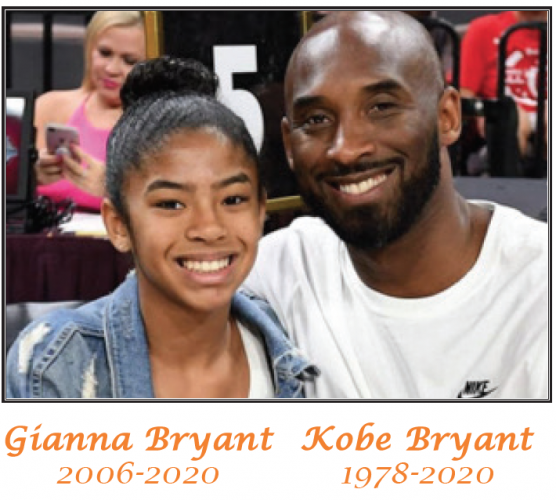 Sports fans in the United States and around the world – plus people who are not necessarily sports-oriented – are mourning the sudden death of NBA legend Kobe Bryant at the age of 41.

Two years removed from retirement after 20 years in the NBA, the five-time NBA champion and Los Angeles Lakers superstar was settling into retirement and immersing himself in sports, entertainment, his family and business ventures when he was killed in a helicopter crash, Sunday, Jan. 26, near Calabasas, Calif.

The crash also killed eight other passengers, including his 13-year-old daughter, Gianna, a budding basketball phenom. In addition to millions of adoring fans, he leaves to mourn him Vanessa Laine Bryant, his wife of 19 years, and three other daughters: Natalia Bryant, 17, Bianka Bryant, 3, and Capri Bryant, 7 months.

The group was on their way to Bryant’s Mamba Sports Academy in Thousand Oaks, Calif., where Bryant was to coach a game in which Gianna was to play. Federal investigators are trying to determine what specifically caused the crash which occurred in dense fog.

Bryant’s death has triggered an outpouring of grief, shock and disbelief among devastated players, fans, celebrities and just those who equated his name with excellence. A common theme offered by tributes is that he had transcended basketball and had become larger than sports.

“Kobe was a legend on the court and just getting started in what would have been just as meaningful a second act,” tweeted President Barack Obama.

“To lose Gianna is even more heartbreaking to us as parents. Michelle and I send love and prayers to Vanessa and the entire Bryant family on an unthinkable day.”

President Trump deflected from his tweeting on impeachment to call the reports on the basketball star “terrible news.” He later released a tweet that critics observed was strikingly similar to President Obama’s:

“Kobe Bryant, despite being one of the truly great basketball players of all time, was just getting started in life. He loved his family so much, and had such strong passion for the future. The loss of his beautiful daughter, Gianna, makes this moment even more devastating,” Trump tweeted. “Melania and I send our warmest condolences to Vanessa and the wonderful Bryant family. May God be with you all!”

Many struggled to find deeper meaning in the sudden death of a person so beloved who had become a symbol of excellence.

“I didn’t know him well. I only met him a couple of times,” said former Vice President Biden on the presidential campaign trail in Iowa as reported by the Washington Examiner. “It makes you realize that you gotta make every day count, every single solid day, every single day count.”

Jalen Rose, a former college and professional basketball player and sports analyst with ESPN described his friend, Bryant, in terms beyond basketball.

“He is remembered for his dedication to his craft, educated, speaker of multiple languages, father, husband, disciplined hardworking, always gracious and respectful,” he said in a tribute. “He was always the hardest working guy in the room, smartest guy in the room … he was Industry tastemaker, gave so much to humanity and is gone too soon.”

Kobe Bryant was born in Philadelphia, the only boy and youngest of three children of former NBA player Joe Bryant and Pamela Cox Bryant. He was first drafted by the Charlotte Hornets in 1996 straight out of Lower Merion High School.

Through hard work and extraordinary dedication to the game, he was seen as a transcendent player, unquestionably one among the best to ever play the game of basketball. But his success impacted beyond the game. In post-game retirement, he inspired hundreds of thousands of young people to aim high, push past their limits, whether it was on a court, a football pitch or in the creative arts.

Kobe, who won five NBA titles and who was an 18-time All-Star, won an Oscar for Best Animated Short in 2019 for the film “Dear Basketball.” The six-minute film is based on a poem Bryant wrote in 2015 announcing his retirement from the NBA. Bryant wrote and narrated the short, in which he shares his love of the sport for basketball.

Bryant considered himself to be a storyteller and had been moving into the film and entertainment industry since his retirement from basketball in 2016. He wrote, produced and presented a series for ESPN called Detail, in which he explained the intricacies of athletes in their respective sports. His multimedia company, Granity Studios, produced the ESPN+ series Detail and the podcast “The Punies.” In addition, he helped create four sports fantasy children’s books. According to media reports, the second volume of The Wizenard Series: Season 1, is set to hit bookstores on March 31.

Still it was basketball for which he will always be world renown. Sports lawyer and businessman Michael Huyghue said an icon of the industry has been lost.

“What he stood for is an early example of an athlete transcending his sport,” said Huyghue, author, sports agent and president of Michael Huyghue and Associates, LLC. “His work in the community, building a brand, his eclectic nature and speaking several languages are a part of his legacy. “He was a very rare breed. He set the bar at a place where a lot of athletes could aspire to.”

Sports Journalist Elton Hayes, Jr. said what sticks out to him is his involvement with children and young people.

“I have been watching all these years. He’s a global icon,” said Hayes, who writes for CNHI News in State College, Pennsylvania. “What sticks out after retirement is the role he played with kids. He showed us his paternal side and the passion he had for women’s basketball. The WNBA is the sister organization to the NBA but there are discrepancies in salary and viewership. He was an active participant and took several women under his wing. I would consider him an ambassador for Women’s basketball…I think a part of his legacy is the impact on a generation of aspiring athletes. With his Mamba Foundation, we will continue to see his legacy grow and will continue to see the impact.”

For the past two years, Bryant had focused on coaching Gianna’s AAU team.

“Coaching youth sports is so important to take very seriously because you’re helping the emotional [development] of young kids,” he said in a recent interview. “So it’s understanding not to be overcritical and understanding that [there] are going to be mistakes.”

And in an interview with People magazine, published online two days before his death, Bryant said he launched Granity Studios “as a way of teaching valuable life lessons to the next generation, with whatever they hope to do. The goal is to encourage children to develop their own inner magic and believe they can achieve the impossible and do so in a fun way.”

Bryant added, “Storytelling has always been an interest of mine, so the transition was an exciting one. I’m being challenged in a completely new way and have really loved the opportunity to exercise my creative muscles.”

Nearly everyone killed in the crash shared a love for basketball, reported the Los Angeles Times. They were Bryant and Gianna,”a budding basketball player who was ready to follow in her father’s footsteps; baseball coach John Altobelli, his wife Keri and their basketball-playing daughter Alyssa; mother and daughter Sarah and Payton Chester; Mamba Academy basketball coach Christina Mauser and pilot Ara Zobayan,” the Times reported.

The beloved Bryant had a reputation as egotistical, a talented super-achiever, driven and difficult. But friends and colleagues spoke of all the good he’s done and the impact he had in his 41 years.

“Devastation, heartbroken describes how I feel,” said ESPN Analyst Stephen A. Smith. “I saw him on New Year’s Eve. He was full of life, happier than I’ve ever seen him. He was loving life in a peaceful place, euphoric of what laid ahead. He was looking forward to and planning on having a life more prosperous and illustrious than what he had accomplished as a basketball player.”

Smith concluded with a thought that’s been on the minds of millions since Sunday: “Never in our wildest dreams did we ever believe that the brilliant savant, a man at least trilingual, would leave like this …”