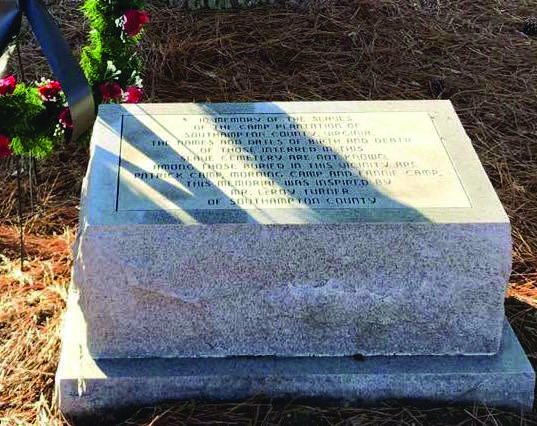 On November 26, State Senator Louise Lucas joined residents of Franklin to pay her respects at a memorial recognizing a cemetery for the slaves who once lived and worked on a former plantation in Southampton County.

According to Franklin City Councilman Greg McLemore, who organized the ceremony, he recently learned of the granite memorial after he was alerted of its presence by Mr. Junie and Mrs. Edna King, former school board chair.

He said they told him that the memorial was first placed at the site by Mr. John Camp of the Camp family around 1961. The Camps owned a huge plantation in Southampton County and hundreds of slaves worked on it.

After the Civil War, local historians say that although the Blacks were freed, many remained to work on the plantation.

According to McLemore the granite monument was laid to recognize a cemetery where the slaves were buried. It names three of the slaves.

The monument sits on property owned by the Southampton Memorial Hospital and the building behind the County Health Department at 200 Fairview Drive.

McLemore said he is not sure of the original size of the cemetery or how many slaves were buried at the site over hundreds of years, in the slave cemetery
But it is speculated the remains of the slaves are under the buildings housing the hospital, health department or adjacent parking lot.

The inscription on the granite monument reads “ In Memory of Slaves of the Camp Plantations of Southampton County, Virginia. The names and dates of the birth and death of those interred in this slave cemetery are not known and among those buried in the vicinity are Patrick Camp, Morning Camp and Fannie Camp. This Memorial was inspired by Mr. Leroy Turner of Southampton County.”

McLemore said it is unclear who Patrick, Morning and Fannie Camp were, but he speculates they could be the names of house slaves. Black slaves were required to adopt the last name of their owners.

Another mystery is who is Leroy Turner. Could he be kin to the famous Nat Turner who led the most successful slave rebellion in the county in 1831. Further research is needed to uncover the mystery surrounding the granite memorial and the people who are buried in the “slave cemetery.”

McLemore said that he was told of the site about one month ago. He said when he first ventured out to find it, it was hidden amongst tall pine trees and it had been left uncared for.
McLemore said that “out of respect for Black history and our ancestors that were slaves,” he was inspired to bring attention to the memorial.

And he said he wanted to pay his respects by organizing a wreath laying ceremony to “our slave ancestors.”

At first he won the support of the current mayor who McLemore said knew about the marker and the cemetery, along with another member of council, Bobby Cutchins, the newest member to the Franklin City Council.

McLemore did not go into detail, but after some initial resistance from the administrators of the hospital complex, he managed to convince the hospital CEO to have the monument cleaned.

The CEO had not yet agreed to the poles and chains McLemore had requested as a protective fence around the memorial and to bring attention of its existence.

McLemore invited both the current and future governor of the state and the Lt. Gov.-Elect, all who did not attend the event. Congressmen Bobby Scott could not attend due to a previous out of state commitment, but, according to Councilman McLemore, sent a letter to be read at the ceremony.

Delegate Roslyn Tyler was invited, along with other state officials who did not attend but Senator Lucas and former school board chair Edna King and a host of others were present at the ceremony.

“I appreciate those who did attend this event to recognize and pay their respects to those slaves who were buried some place near this memorial marker,” said McLemore. “I am disappointed that there are 41 churches in the city and not one of the local pastors bothered to attend. It’s a shame how little our history or respect for our ancestors they have. Or perhaps it’s because no money was involved.”

McLemore said he will be leading a state-wide effort to have wreaths laid at slave cemeteries across Virginia on Juneteenth which is June 19th. Then by 2019 to have enacted a federal proclamation to declare June 19th “Lay a wreath for the Black slaves of America Day,” along with Juneteenth recognition in all the slave-holding states of the nation.

McLemore said with the help of federal Congressmen like Bobby Scott and other federal Democratic representatives, he feels confident “such a task should be able to be accomplished.”