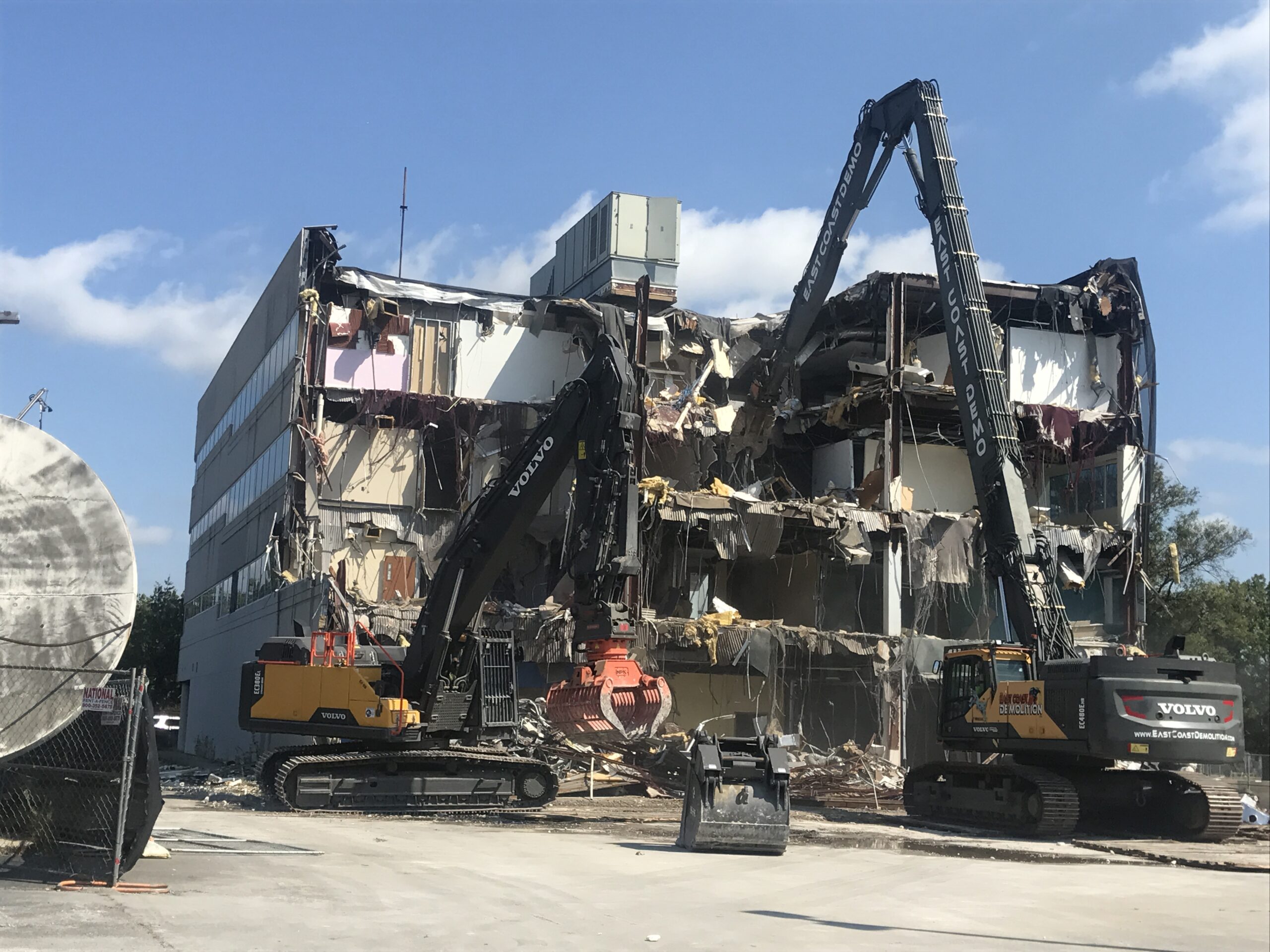 The five-story building which once housed the now-defunct Willis Broadcasting Company and other Black-owned businesses is being razed by the city of Norfolk.

Early last week, massive machines owned by the Coastal Demolition Company were being positioned near the south end of the structure at Church Street and Brambleton Avenue.

Black protective netting was draped around the east facade of the building facing Church Street across from the massive United States Postal Service building. A worker at the site, positioning equipment, told a reporter for the GUIDE that the company would begin razing of the building by the end of the week.

According to Lori Crouch, the press spokesperson for the city, the building suffers from extensive structural weaknesses.

In an email to the GUIDE, Crouch said, “The structural issues in the building included flooding on the bottom floor (pipe burst), roofcaving in, mold everywhere, mechanical and electrical issues, inoperable elevators.”

The 57,000 square feet building has been empty since the end of 2018. The owners of the building began moving tenants out earlier that year.

At that time, the Harvey Lindsey Real Estate Company was managing the building for an entity in California that bought it from the Willis Broadcasting Company, months earlier.

By mid-August 2018, only two tenants remained in the building.

According to one tenant, the leader of the International Black Women’s Congress (IBWC), Dr. La Frances Rodgers-Rose, the owners said it would not renew their leases and they had until November 31, 2018 to vacate, a fact the real estate company verified.

The Harvey Lindsey Company said that once the tenants were out of the building, the owners would begin rehabilitation on the facility to repair damage by a recent hurricane that caused significant damage. Also, extensive structural and mechanical repairs were needed due to a lack of maintenance over the years.

The GUIDE then was told that it would be restored to an office complex and other commercial uses.

The owners did do some structural repairs. But a source said the city which eventually bought the building believed the structural weaknesses were so intense it was not worth the investment, according to one source with knowledge of the issue.

At one time, after the building was emptied and the California owners considered extensive rehabbing of it, there was talk of possibly repurposing the building to complement the massive St. Paul’s Redevelopment Project that is underway in the area.

As the city is demolishing the old office building, half a block away, machines are busily razing the public housing units which make up the Tidewater Gardens community.

It will be the first of the three low-income public housing communities the city has targeted to raze as part of the St. Paul’s Redevelopment.

The current residents of the area are slowly being relocated to remaining public housing communities or given Section 8 vouchers to secure housing in privately owned units.

Recently the St. Paul’s Redevelopment Advisory Committee released the initial rendition of how the Tidewater Gardens area will be redeveloped.

According to Crouch, a private developer out of Chicago who is working with local partners has expressed interest in the property.

But Councilman Paul Riddick said that the city is working to help the Historic First Baptist Church, which sits near the building, and has also expressed interest in buying the land for development.

First Baptist and several other Black churches have extensive property ownership in the area.

But some Black leaders have expressed concern about the virtual non-existence of private-business property ownership by Blacks downtown.

Riddick, who once hosted a community radio program from the Willis Broadcasting studios for 19 years, said that if First Baptist could secure the property it would provide some measure of Black property ownership downtown

The 645 Building was originally built by J. Hugo Madison, a civil rights lawyer for the NAACP, and businessman, according to Councilman Riddick. For a short time, Attorney Madison owned the New Journal and Guide newspaper after buying it in 1973 from its owner Bishop Levi E. Willis. Within a few months after purchasing the newspaper, Madison sold it to Dr. Milton A, Reid in 1974. Since 1991, the newspaper has been owned by its current publisher Brenda H. Andrews.

At one time, as part of one of the city’s ongoing efforts to redevelop the area where the building sits, Bank of America reportedly had designs on using it as a branch.

But those plans changed and Madison, according to Councilman Riddick, sold the building in 1987 to Willis Broadcasting which is owned by the family of the late Bishop Willis. Willis was a prominent leader in the national and local Church of God in Christ (COGIC) and a businessman.

When Willis died in 2009 the ownership of the building was transferred to the family.

In 2017, the building was sold to investors in California, according to Ned Williams, Vice President of Investment at Harvey Lindsay Commercial Real Estate.

According to Williams, the mortgage loan on the building had been foreclosed on and the building was no longer owned by Willis Broadcasting and the family.

When it was initially sold to the California entity, the building was being managed by the S.L. Nausbaum Real Estate in Norfolk which collected rents from the tenants.