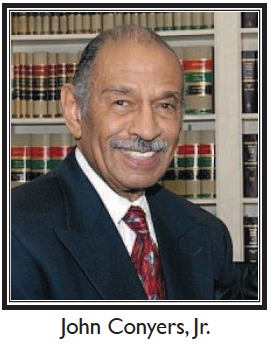 John Conyers, Jr., the longest serving African-American member of Congress and co-founder in 1969 of the Congressional Black Caucus, died Sunday, Oct. 27, in Detroit. He was 90 years old. The cause of death has not been revealed.

Conyers served 53 years in Congress and was once fondly known as the dean of the Congressional Black Caucus which he helped found in 1971. He was the sixth longest serving member of Congress before he resigned in 2017 amid sexual harassment allegations. During his tenure, he represented the 1st, 14th and 13th Congressional Districts in Detroit and the suburbs.

A graduate of Wayne State University and Wayne State University School of Law, voters elected Conyers to Congress in 1964. He took the oath of office in 1965 during the Civil Rights struggle. He befriended Dr. Martin Luther King Jr. and he hired Rosa Parks to work in his Detroit congressional office when no one else would give her a job.

Conyers introduced the 1965 Voting Rights Act under President Lyndon Johnson, and he succeeded in establishing a national holiday honoring the birthday of Dr. King.

Conyers was chair of the House Judiciary Committee from 2007-11. And he led the powerful House Oversight Committee as its chair from 1989 to 2004.

As the ranking Democrat on the House Judiciary Committee, he joined other committee members in 1974 submitting Articles of Impeachment against President Richard M. Nixon. However, Nixon resigned from office before he could be impeached.

Conyers was also chair House Oversight Committee from 1989 to 2004. The late Elijah Cummings held the same position when he died.

In addition, Conyers introduced in every Congress starting in 1989, legislation that would set up a commission to examine the institution of slavery in the nation and its colonies. The legislation recommended appropriate remedies.

He also pushed for a single-payer or government-directed health care system.

Conyers was the son of John Conyers, Sr., a labor lawyer. He was born in Highland Park, Michigan, on May 16, 1929. He served in the Korean War.

He is survived by his widow and two sons.

Tributes from civil rights and Democratic leaders had begun to pour out this week.

“From co-founding the Congressional Black Caucus, to advocating for the creation of Martin Luther King Day, some of the most important civil rights victories of the last half-century would not have been possible without the enduring leadership of Rep. Conyers in Washington,” said Derrick Johnson, President and CEO of the NAACP.

“As a Detroit native, I can attest to what John Conyers meant to his beloved Detroit community, and we are eternally grateful that he fought for justice on behalf of the entire nation with the same commitment and perseverance he showed his beloved hometown. Today we have lost a trailblazer for justice, a titan of the movement, and a true friend and ally to the NAACP.”

NAACP Board Chairman Leon W. Russell said, “I am moved by the dedication of John Conyers’ to the fight for social good and his fearless pursuit to tear down barriers of injustice and racism. He will forever be remembered as a giant that gave his life to advance democracy.”

Democratic National Committee Chairman Tom Perez said, “Congressman John Conyers was a civil rights warrior, a lifelong public servant, and a stalwart Democrat. Over the course of his public service career, which spanned more than half a century, Rep. Conyers led groundbreaking fights that advanced the course of history, including introducing the first bill to establish the Reverend Dr. Martin Luther King Jr. holiday. As a co-founder of the Congressional Black Caucus, he changed the face of leadership in the halls of Congress and blazed a trail for future leaders of color.”

The Trice Edney News Wire contributed to this article.

Follow us
In this article:Cong. John Conyers, Jr. Dies