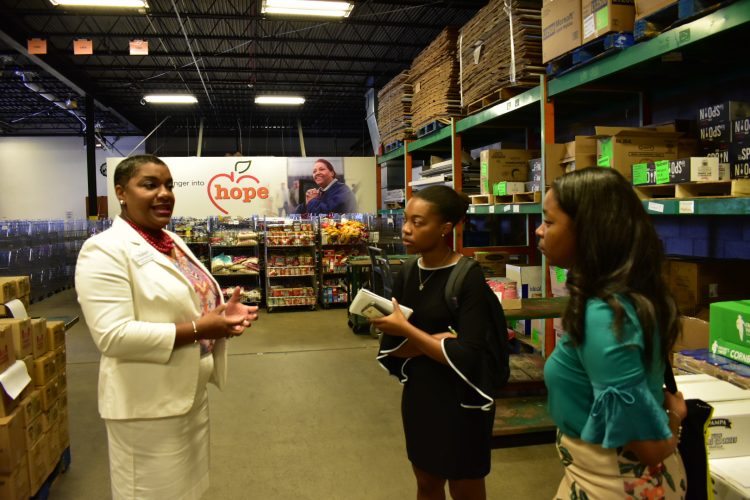 On a Wednesday, the Food bank of Southeastern Virginia and the Eastern Shore is “business as usual,” according to CEO Ruth Jones Nichols. Beyond the bright lobby area, holding a receptionist’s desk and a shelf with books for visitors to borrow, lies a sterile warehouse filled with shelves upon shelves of all the components of a healthy meal. It’s the middle of the week, meaning the fresh produce stocked in the refrigerator every week should be halfway gone.
In the warehouse, a small fraction of the more than 6,000 volunteers the food bank receives in a year help to sort, inspect and package foods so families will receive a proportionate amount of each component of a healthy, nutritious meal.
The Foodbank services the Southeastern area of Virginia, including Norfolk, Portsmouth, Chesapeake, Suffolk, Franklin and Virginia Beach. In Norfolk alone, just under 20% of the population is considered food insecure. People who are food insecure are those who have limited or inconsistent access to healthy foods. Those who are food insecure may have to choose between healthy food options, healthcare and other basic needs.
Located within Norfolk is the Ocean View area, which fits the US Department of Agriculture’s definition of a food desert: a low income area with a grocery store more than a mile away. The food bank is partnering with a number of agencies to provide healthy food options for the area, since the closure of its Farm Fresh grocery store in April. For residents of the area, that meant having to travel about three miles to the nearest grocery store, Harris Teeter, or even longer for those receiving government benefits because Harris Teeter does not accept SNAP benefits.
This complex issue of accessibility is the food bank’s target issue. It specializes in food acquisition and distribution, offering programs like the mobile pantry, in which the food bank sends out a refrigerated truck to communities that do not have a partner operating a food pantry or soup kitchen. It acquires most of its food through donations from grocery stores, sponsorships and other partners.
“We realize that feeding people, alone, is not going to end hunger,” Jones Nichols, a former career social worker, said. “We need scalable, sustainable and effective approaches that will address the short-term needs that people have for food access, and the long-term needs people have when they’re food insecure.” She urges systemic change that addresses the roots of the problems of hunger and food insecurity.
Not far from the Food Bank is the Safe Creative Community Space, a community garden tended to by Teens With a Purpose, a nonprofit group serving the teens of the area. It provides fresh produce, harvested every Wednesday, to alleviate the stresses of food insecurity. The garden is situated among three public housing communities that the city recently announced plans to demolish: Young Terrace, Tidewater Gardens and Calvert Square.
According to Jones Nichols, these three communities make up 4,200 people who use the food bank’s services. There is a Save-A-Lot grocery store across the street from the garden with a limited selection of healthy foods. Aside from the Save-A-Lot, residents must travel to the next closest grocery store: a Harris Teeter.