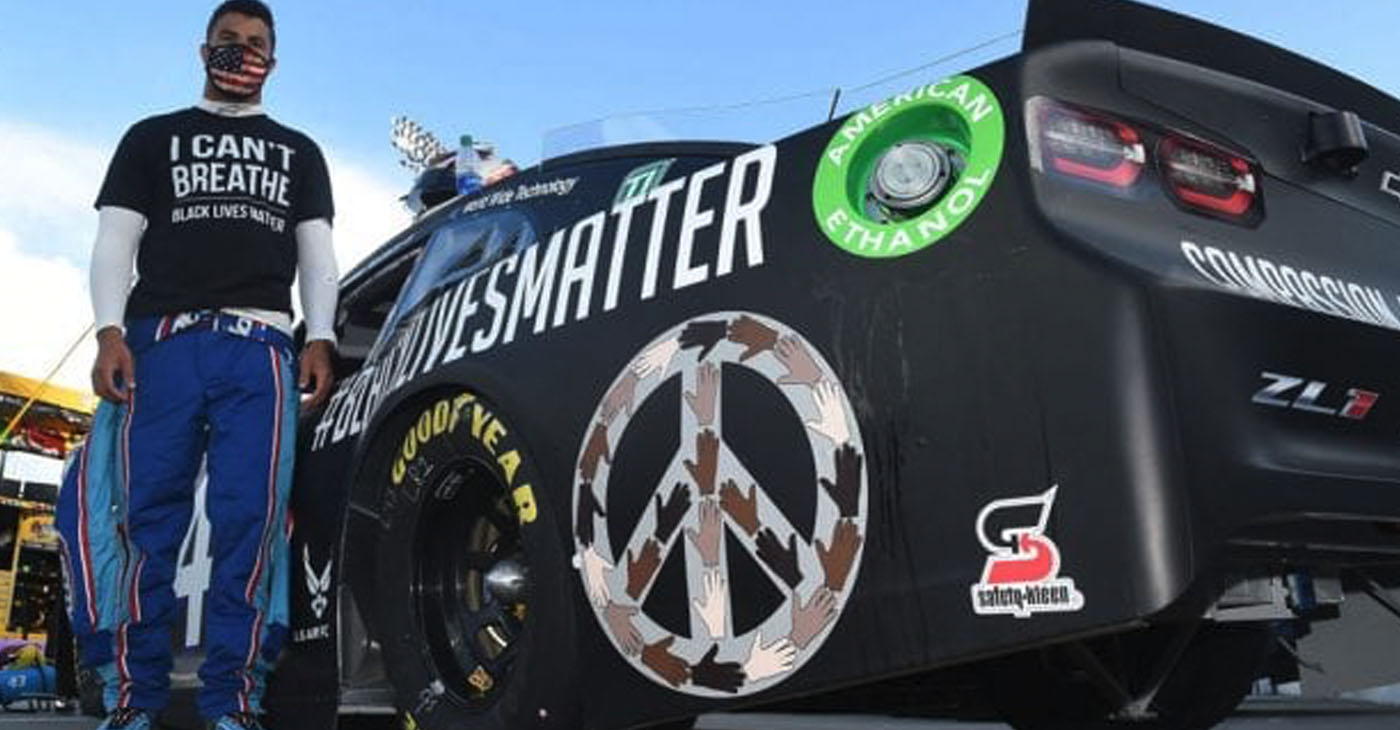 For the first time in NASCAR history, there were no Confederate flags flying inside of the NASCAR Talladega (Ala.) Superspeedway on Monday, June 22, where a noose was found a day earlier hanging in the stall of its only Black driver, Bubba Wallace. An immediate investigation by the FBI quickly concluded the noose was unrelated to Wallace and had been in the stall since October 2019.

Two weeks ago, NASCAR announced it was removing the Confederate flag from all of its events, an act that incited the flying of a plane above the track on Monday with a Confederate flag banner reading, “Defund NASCAR.” Plenty of Confederate flags lined the property outside of the raceway and on parked cars.

NASCAR reportedly has spent years trying to rid its events of the Confederate flag which dates to its founding more than 70 years ago.

NASCAR made its announcement on June 10 after Bubba Wallace made headlines when he painted the #BlackLivesMatter hashtag on his race car in support of the protests over the police killing in Minneapolis of George Floyd.

Before Monday’s race, NASCAR drivers galvanized support for Wallace by pushing his No. 43 Chevrolet car to the front of the track, as the FBI began its investigation into the racist act.

Wallace never saw the noose which was in a restricted area that is accessible only to such persons as team members, officials, security, and medical staff.

“We are angry and outraged, and cannot state strongly enough how seriously we take this heinous act,” NASCAR said in a press release. “We have launched an immediate investigation, and will do everything we can to identify the person(s) responsible and eliminate them from the sport.”

Wallace drives for racing icon Richard Petty, who said in a release that he was “incredibly saddened” by the incident.

Wallace wrote on Twitter, ”Today’s despicable act of racism and hatred leaves me incredibly saddened and serves as a painful reminder of how much further we have to go as a society and how persistent we must be in the fight against racism.

”Over the last several weeks, I have been overwhelmed by the support from people across the NASCAR industry, including other drivers and team members in the garage. Together, our sport has made a commitment to driving real change and championing a community that is accepting and welcoming of everyone.

“Nothing is more important and we will not be deterred by the reprehensible actions of those who seek to spread hate. This will not break me, I will not give in nor will I back down. I will continue to proudly stand for what I believe in.”

Alabama Gov. Kay Ivey said in a statement Monday, ”I am shocked and appalled to hear of yesterday’s vile act against Bubba Wallace in Talladega — there is no place for this disgusting display of hatred in our state.”

The FBI said after completing its investigation that no charges would be filed since no crime had been committed.