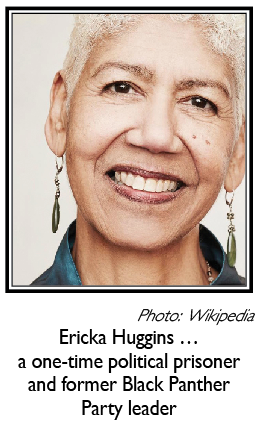 Some of the women who supported The Black Panther Party are on display at the National Museum of African-American History and Culture in an exhibition titled, “A Changing America: 1968 and Beyond.”
The women in the wall-size photo – Delores Henderson, Joyce Lee, Mary Ann Carlton, Joyce Means and Paula Hill represent a segment that often worked 17, 18, 19-hour days to help the organization achieve its vision. History calls them the “rank and file,” members who did not individually generate headlines or sound bites, but managed daily operations.
“They were fighting for their lives, they were fighting for their loved one’s lives, they were fighting for their children’s lives. They were motivated by the fact that the Black community was under assault and it was time to make a difference. It was time to change things,” said Angela LeBlanc-Ernest, co-founder of the Intersectional Black Panther Party History Project, a group of scholars and filmmakers who collect stories, archive information and shape the narrative of women in the BPP.

The permanent exhibit, “A Changing America: 1968 and Beyond,” traces the impact that the aftermath of the assassination of Martin Luther King Jr. had on people’s lives, according to the museum’s website. The exhibit highlights the work of the Black Panthers, hip-hop musicians, and the nation’s first African-American president,

The wall-sized photo of the women who worked in The Black Panther Party shows that some rallied, some handled administrative duties, some worked armed security, and some served as organizers. Others worked on production, design, and distribution of the newspaper.
“There was no one way to be a Black Panther Party woman. They came from all walks of life, and they entered and exited the party at different times,” said LeBlanc-Ernest. “There was a cultural moment happening and the women in that photo reflect its youthfulness and willingness to make a difference. If you look at the stance they’re taking, their fists in the air, there’s a unity and uniformity.”
Ericka Huggins, a one-time political prisoner and former leader of the Black Panther’s New Haven, Connecticut chapter, said, “When I say that women ran the Black Panther Party, I’m not bragging. It wasn’t fun, it wasn’t cute. It was dangerous and it was scary.”
Huggins added, “The work that women did held the Black Panther Party together. If Huey were alive, he would say that. Bobby Seale is still alive and he says that all the time. There’s nobody that would refute it. It was a fact.”
Huggins said she looks at the exhibit and wonders where the women in the photograph are now? “What are they doing, who remembers them, who knows their names?”
Launched in October 1966 by Newton and co-founder Bobby Seale, the organization aimed to resist government oppression and police brutality.