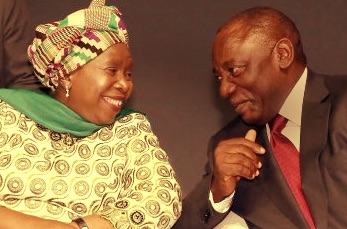 (TriceEdneyWire.com/GIN)
With President Jacob Zuma winding up his last term in office, his ex-wife is building up campaign momentum, especially among women. She’s one of two leading candidates for the top job.
An early anti-apartheid activist, Nkosazana Dlamini-Zuma was an active underground member of the South African Students’ Organization and was elected its deputy president in 1976.
Later, as a doctor in Swaziland, she met her future husband, current ANC party president Jacob Zuma.

Several cabinet positions followed – as Minister of Health, Foreign Affairs and Home Affairs. In 2012, she was elected chair of the African Union Commission, serving until January 2017.
But her accomplishments underperformed, according to some political observers, and in a few cases were serious missteps.

During the early years of the AIDS crisis, Dlamini-Zuma along with President Thabo Mbeki endorsed Virodene, a controversial AIDS drug developed in South Africa but rejected by the scientific community. It was later learned that the main active ingredient was an industrial solvent and that businessmen with ties to Mbeki had invested in it.

More recently, she was chastised for labelling nationwide protests calling for President Zuma to step down as “rubbish” in a tweet which was then deleted from her timeline.

Her colleagues at the African Union considered her remote, disinterested and often absent from duty.

Even though there are other women aspiring to the number one spot, Dlamini-Zuma has become the face of the ANC Women’s League’s call that “South Africa is ready for a woman president.”

While she generally avoids the media and spends little time shaking hands, her stump speeches are turning heads with their focus on “Radical Economic Transformation,” – why white people shouldn’t fear it, and why it is necessary to change ownership patterns.

She faces a tough fight, however, from ANC deputy president Cyril Ramaphosa who has already racked up nominations from branches in Gauteng, Pretoria, and the West Rand. A successful businessman and trade union leader, he was the ANC’s chief negotiator during the country’s transition to democracy.

He has an estimated net worth of over $450 million and owns 31 properties.

Particularly disappointing, he opposed the Marikana miners’ strike, which he called “dastardly criminal” conduct, while he served on the board of Lonmin, the miners’ employer.
Voting for ANC party president takes place in December. National elections are in 2019.

GLOBAL INFORMATION NETWORK creates and distributes news and feature articles on current affairs in Africa to media outlets, scholars, students and activists in the U.S. and Canada. Our goal is to introduce important new voices on topics relevant to Americans, to increase the perspectives available to readers in North America and to bring into their view information about global issues that are overlooked or under-reported by mainstream media.